Scroll down this page or click on specific site name to view features on the following Pitt County attractions/points of interest:

Greenville Museum of Art, May Museum 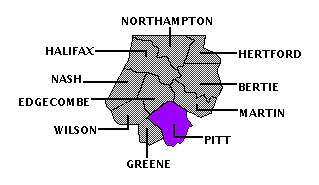 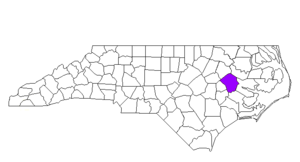 Created in 1760, the county is named for William Pitt, earl of Chatham and Prime Minister of Great Britain.

It is worth noting that East Carolina University, founded in 1907, is located in Greenville.

Below:  Wright Auditorium on the campus of East Carolina University. 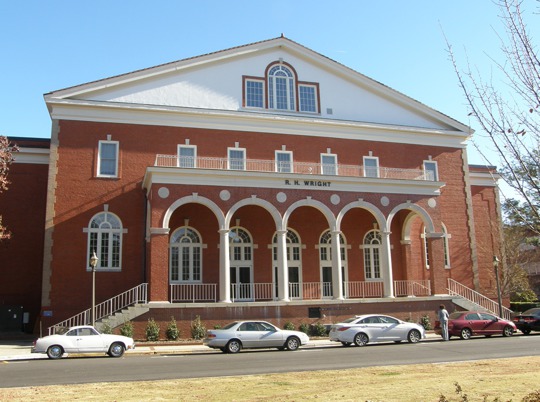 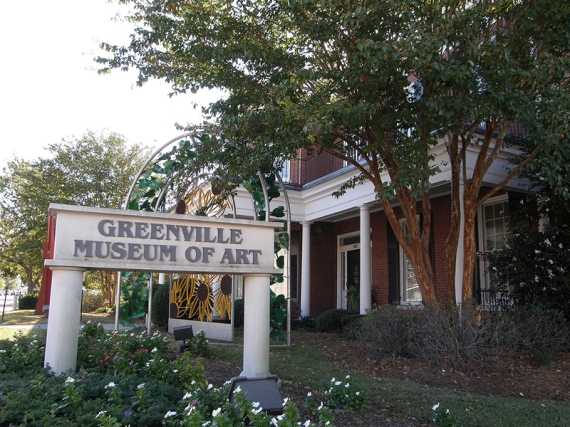 The Greenville Museum of Art is a repository of regional art and its location seems highly appropriate.  Greenville, NC is home to East Carolina University, and ECU is the only school in the University of North Carolina system that has a School of Art. Although there are more than 8,000 museums in the United States, less than ten percent of them – just over 750 – have received accreditation by the American Association of Museums. The Greenville Museum of Art received this honored distinction in 1986.

The Museum’s origins go back to 1939, when a Works Progress Administration Gallery opened in a Greenville store front. When the WPA was terminated in 1943, the gallery’s name changed to the Community Art Center and the collection was moved to the town library. In 1959, the East Carolina Art Society, governing authority for the Center, purchased the former residence of Edward and Rosamond Flanagan with the intent of making it the new home for the collection. The renovated, two-story brick house assumed its new role the following year. The name was changed to the Greenville Museum of Art in 1980.

The collection’s wide variety of visual arts has a decidedly North Carolina flavor, as might be expected. For example, the Museum showcases the state’s largest permanent collection of Jugtown pottery, a distinct style of earthenware with its roots in and around Moore County. The facility’s largest gallery features a long-term exhibition of work by numerous North Carolina artists, with an eclectic mix of style, subject matter, and media by emerging, mid-career, and mature artists. Another long-term exhibition, entitled “American Landscapes,” displays paintings from the 1870’s to the present. The West Wing Gallery features temporary exhibits and recently displayed the work of Connecticut-born Robert Broderson. Broderson earned a BA in art from Duke University in 1950 and taught art at his alma mater from 1952 until 1964, at which time he received a prestigious Guggenheim Fellowship and began painting full-time. He is considered one of the great North Carolina modernists and his paintings are characteristically filled with monochrome images of wide-eyed faces and skeletal figures.

Two permanent exhibits focus on individual artists with North Carolina ties: Kenneth Noland, Francis Speight, and Sarah Blakeslee. Noland, a native of Asheville, is considered one of the most important artists of the 20th century; his exploration of colors using geometric formats led one critic to regard Noland as “one of the most inventive colorists in all of modern art.” His work is included in every major collection in the country, and, in 1995, he was the recipient of the state’s highest honor given to an artist, the North Carolina Award in Fine Arts. Noland’sMysteries: West Light was unveiled at the Greenville Museum of Art in 2002. Husband and wife Francis Speight and Sarah Blakesee also rank among the most important of Tar Heel artists. The couple moved to Greenville in 1961; Speight became the artist-in-residence at East Carolina College, and Blakesee taught adult classes at local art centers. Like Noland, both Speight and Blakeslee were recipients of the North Carolina Award in Fine Arts. The paintings of Speight lean toward traditional landscapes; Blakesee gained recognition as a portrait artist. To help younger visitors gain an appreciation for art, the “Look and Learn” Gallery provides descriptions and examples of the various media artists use to express what they see and feel. Hours are 10-4:30 Tuesday through Friday, 1-4 Saturday and Sunday. Admission is free. 252-758-1946 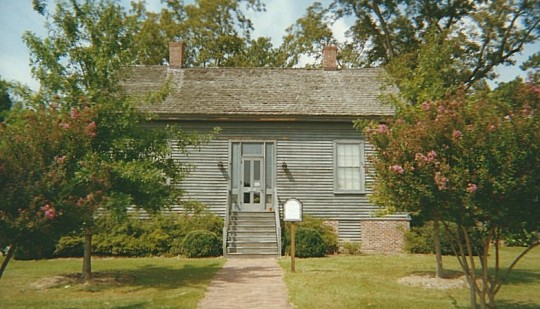 The May Museum, located in the village of Farmville in northwestern Pitt County, exhibits items of local and regional interest. The museum is housed in a two-story frame home built by James Williams May, grandson of Major Benjamin May, a veteran of the Revolutionary War. In appreciation for his services as militia leader, the Major was given over 1,000 acres in western Pitt County, and May established a small farming community called New Town. In 1870, James May built a new home for his family next to the old plank road that ran through New Town from Greenville to Raleigh. Taking advantage of the location, he operated a community store out of his home for many years. May was instrumental in having the small hamlet incorporated in 1872. At this time, in recognition of its agrarian roots, the town was renamed Farmville. The house remained in the family until the death in 1983 of Tabitha Marie DeVisconti, a great-great granddaughter of Benjamin May. With no children, nephews, or nieces to inherit the property, Mrs. DeVisconti left the property to the community with the stipulation that a museum be established. Her wishes were fulfilled in 1990. A guided tour of the home includes three of four first-floor rooms, both upstairs bedrooms, and the two-room frame house at the rear, attached to the main house by a covered walkway.

One downstairs room features permanent exhibits pertaining to the colonial period and displays personal effects and furnishings of the May family. The other two rooms showcase temporary exhibits. Currently, one is being prepared to represent a tobacco warehouse, very appropriate for a community whose economic well-being for so many years was dependent upon tobacco. The other room features what museum director John Rossi terms a “process-oriented” display on quilting. The museum has dozens of quilts on display in rooms and on walls throughout the house. One of the most interesting is a quilt made in 1902 as a fund-raiser by the ladies of the Farmville Methodist Episcopal Church – individual families provided squares to be used in making the quilt, each square bearing the names of people who contributed money to the church. One upstairs bedroom is furnished with pieces representative of the early Empire style, the other with that of the late Empire. The bedrooms themselves are highly unusual in that each has an enclosed fireplace in the exact center of the room. The furnishings in the detached outbuilding at the rear of the main house are typical of the period immediately following the Civil War, when both it and the main house were built. A massive brick fireplace dominates the large kitchen which occupies the back half of this structure.

The house also has some local notoriety about it. Although continuously owned by the May family, it was rented out for an extended period during the early 20th century, and a murder was committed in the house around 1919. A man who had been hired to help replace the plank road with a paved highway was living in the home with his wife. He was having a dalliance with his sister-in-law, and when his wife found out about the affair, she decided the only way he could repent for his transgressions was to agree to a suicide pact. The man shot his wife but hesitated to turn the gun on himself. Alerted by the gunshot, neighbors rushed to the house before he could take his own life. Imprisoned, he escaped prior to trial and was never found. The May Museum is open 10-5, Wednesday-Saturday and 2-5 Sunday. There is no admission fee, but donations are accepted. 919-753-5814