Scroll down this page or click on specific site name to view features on the following Hertford County attractions/points of interest: 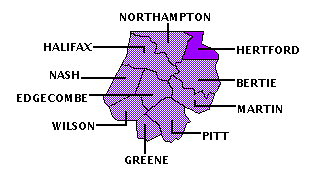 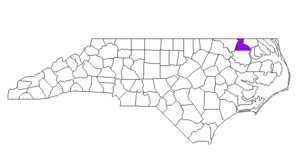 Created in 1759, the county is named for Francis Seymour Conway, Earl of Hertford.

The county seat is Winton (originally Wynntown).  Other communities include Ahoskie, Cofield, Como, Harrellsville, and Murfreesboro.

It is worth noting that on Februray 20, 1862, during the American Civil War, the town of Winton was burned by Federal troops.

Below: Parker's Ferry crosses the Meherrin River between Como and Winton. 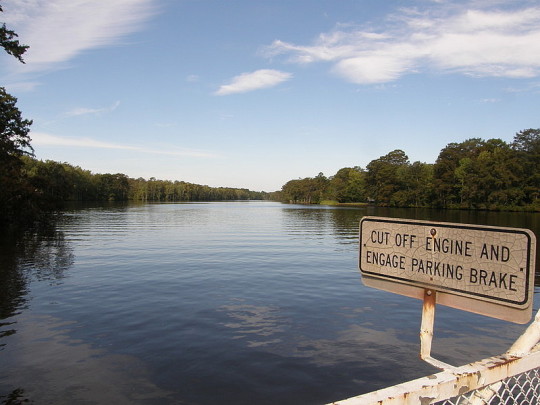 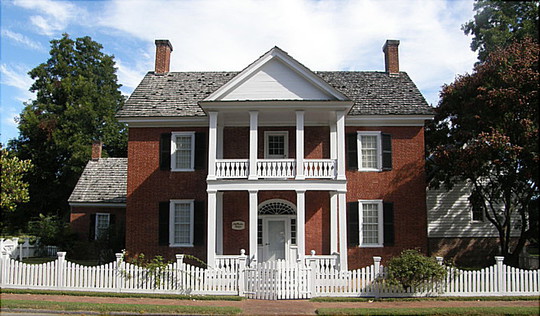 Historic Murfreesboro includes several historic buildings and a variety of interesting artifacts. Although most readers can easily envision the famous 1903 Wright Flyer that demonstrated that man could fly, it’s unlikely that many can picture America’s first airplane, one built thirty years earlier. Few individuals have seen an original Gatling gun or a rare, 200-year-old giraffe piano. Fortunately, these items and many more can be seen on a visit to historic Murfreesboro in northeastern NC. Tours begin at the former Murfree-Smith Law Office on Williams Street that currently serves as the Murfreesboro Historical Association [MHA] Gift Shop. The MHA offers Saturday tours of six buildings, all filled with fascinating artifacts. 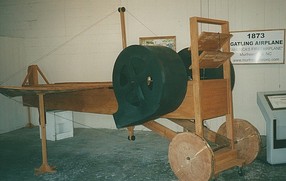 The Agriculture and Transportation Exhibit Building showcases a variety of farm implements, wagons, and carriages, but the real eye-catcher is the replica of the 1873 Gatling aeroplane. Farmer, businessman, wine merchant, and inventor James Henry Gatling designed what local residents dubbed the “Turkey Buzzard.” Gatling’s plane was built primarily of wood, with a wing-span of approximately 14 feet. A hand crank in the cockpit generated the power to flap the craft’s triangular-shaped wings. On a Sunday afternoon in the fall of 1873, Gatling launched his experimental craft from a 12-foot high platform projecting from the roof of his cotton gin. According to witnesses, Gatling’s airplane was definitely aloft, but it was not aloft indefinitely.   After covering a distance of about 65 feet, the plane was some 4 feet off the ground when the left wing snagged a tree and the plane spiraled to the ground. Although Gatling was not seriously injured, his machine suffered considerable damage and was never repaired. The craft was ultimately destroyed when the barn in which it was stored caught fire in 1906. No original drawings or documents survive, and the full-scale model on display is based upon descriptions of the airplane collected years after the original was lost. 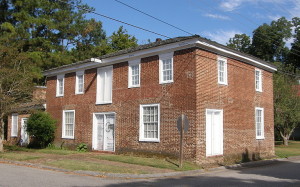 The Rea Museum, built circa 1790, has the distinction of being the oldest commercial brick building in North Carolina. It houses numerous exhibits detailing the commercial and social history of Murfreesboro, a town founded along the banks of the Meherrin River in 1746 by William Murfree. The museum features an original Gatling gun, designed by James Gatling’s younger brother Richard. Like his older brother, Richard Jordan Gatling was an inventor, and along with designs for bicycles, steam plows, and seed planters, he also came up with the revolving battery gun. Although used briefly during the Civil War, the Gatling gun proved to be a decisive factor when Teddy Roosevelt’s Rough Riders successfully charged San Juan Hill during the Spanish-American War. 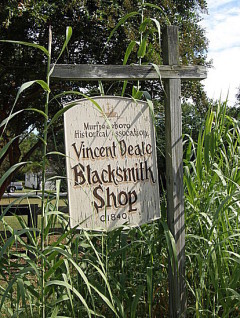 The Wheeler House is an impressive, two-story brick home originally built in 1810 as a store.  It was converted it into a residence by Dr. John Wheeler, who purchased the property in 1814.  His son, John Hill Wheeler, served as a state legislator and as treasurer of the US mint in Charlotte.  He was also the first native North Carolinian to write a history of his state.  It is in the Wheeler House that visitors will see the very unusual giraffe piano, somewhat similar in appearance to a harp.  Built circa 1810, this vertical piano was designed to save space.  Six pedals produced different sound effects, including bells and drums.  Also included on the tour are the Winbourne Country Store (c. 1870), the Vincent-Deale Blacksmith Shop (c. 1840), and the Evans Tin Shop.  Tours begin at the former Murfree-Smith Law Office, now serving as the Murfreesboro Historical Association [MHA] Gift Shop.   Tours are conducted continuously from 11-4 Saturdays from April through October.  Admission charged. 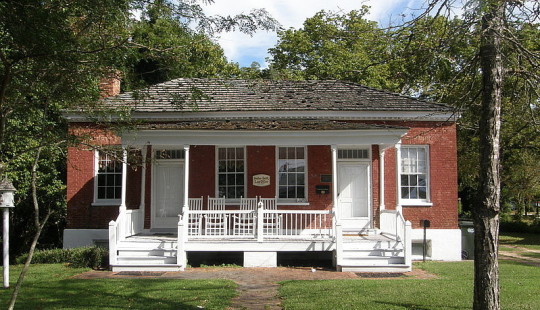 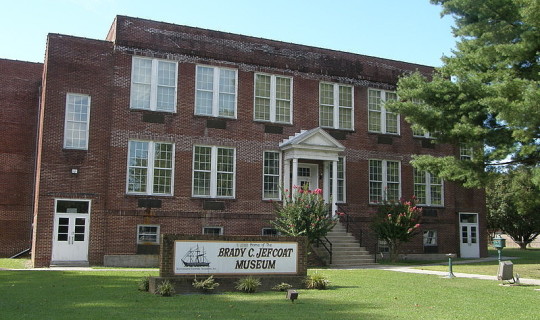 The Brady C. Jefcoat Museum of Americana in Murfreesboro fills three floors of the old city high school with every kind of artifact you can imagine – and some you can’t – all relics of America’s past. A recent visitor to the Museum was heard to comment “Times have kinda changed, haven’t they?” and the items on display will certainly lead others to draw that same conclusion. The Museum is located at 201 West High Street, one block off Main Street in downtown Murfreesboro.  The Museum of Americana, which opened in 1999 and was the subject of a cover feature in Newsweek magazine, showcases the private collection of the gentleman whose name it bears, Brady C. Jefcoat, a resident of Raleigh. 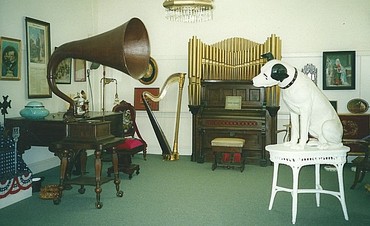 A self-educated, blue collar handyman, Jefcoat is described as a “do-anything” sort of individual who earned a living as a plumber, electrician, bricklayer, and many other occupations. This jack of all trades was smitten with the collecting bug following his wife’s death in 1979. Frequenting yard sales and flea markets, he was intrigued by items from the past – what they did and how they worked. One purchase led to another, and over time Jefcoat had filled his house and several garages with a jumble of relics, mostly from the 19th and early 20th centuries. Although several communities were interested in putting the collection on display, Jefcoat was insistent that it be displayed in its entirety. The Murfreesboro Historical Association was the first to come up with a facility that would do the job. The Murfreesboro High School, built in 1922 and closed in 1997, thus became the official home for the Jefcoat collection. More than 80 years old, the traditional brick school building is an interesting structure to visit in its own right. Under Jefcoat’s direction, more than 10,000 individual items have been carefully arranged to fill some 17,000 square feet of display space. The Museum showcases the largest collection in the United States of music boxes, butter churns, and washing machine equipment. It’s also home to the largest collection of irons in America – this one display alone stretches the entire length of the basement hallway!

The modest admission fee includes a guided tour. With so many items on display, guides will single out some of the more interesting objects. One such item, giving testament to American ingenuity, is an Anchor brand washing machine. A wooden conveyor, similar in concept to a walking machine in a modern health gym, is attached by a belt to the washing machine’s agitator. As a dog “walked” the conveyor, the agitator would turn. If a dog wasn’t handy, a goat could be pressed into service. Similar conveyors were attached to butter churns, and examples of those devices are also on display. The Museum’s “laundry room” includes all shapes and sizes of washers, washtubs, and washboards, many of which are hand-carved.

The collection of music boxes, phonographs, musical instruments, record players, and radios fill the entire top floor. One of the obvious benefits of receiving a guided tour is that visitors are able to ask questions about specific items. Another is that the guide can occasionally demonstrate an item. This is especially true with regard to the music collection – how often does one get to hear a century-old recording played on a vintage Victrola? The Museum is located at 201 West High Street, one block off Main Street in downtown Murfreesboro. Hours are 11-4 Saturday and 2-5 Sunday. Admission charged. 252-398-8054

Hertford County is bordered by BERTIE, GATES (Region One), and NORTHAMPTON counties.