Scroll down this page or click on specific site name to view features on the following Wilson County attractions/points of interest: 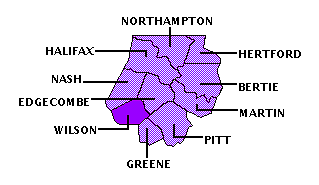 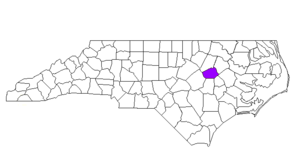 Created in 1855, the county was named for Louis D. Wilson, a state legislator who died in service during the Mexican-American War.

The county seat is Wilson.  Other communities in Wilson County include Buckhorn Crossroads, Elm City, Saratoga, Sims, and Stauntonsburg. 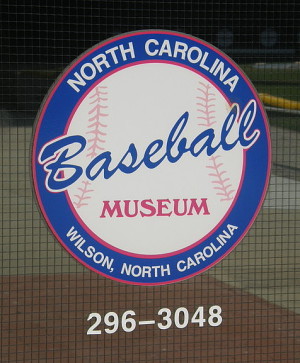 The North Carolina Baseball Museum is located in an unassuming, canary-yellow, cinder block building on the third base side of historic Fleming Stadium in Wilson. It’s 3,300-square foot exhibit area is chock full of memorabilia associated with the hundreds of Tar Heel natives, past and present, who made it to the majors. Wilson might seem an odd home for a baseball museum until one learns more about the rich history of Fleming Stadium itself. Built in 1938, such baseball greats as Ted Williams, Richie Ashburn, and Robin Roberts have played in exhibition games here.   In 1961, only a few short weeks after eclipsing Babe Ruth’s single-season record for homers, Yankee slugger Roger Maris competed in a home run derby at Fleming Stadium against the Minnesota Twins’ Harman Killebrew. In 1966, Rod Carew played minor league ball here for the hometown Wilson Tobs. The Tobs still compete here as part of the collegiate summer baseball Coastal Plain League. Fleming Stadium has also been the site for several regional and super regional NCAA playoffs. 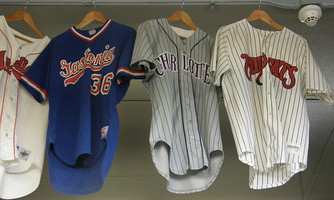 The Museum is divided into two exhibit rooms, one devoted mostly to North Carolina players in the majors, the other to the state’s minor league and college teams.   The first features long display cases showcasing literally hundreds of Tar Heel players who made it to the big leagues.   The seven NC natives who are members of the National Baseball Hall of Fame in Cooperstown, NY is each given his own exhibit case. Lucius “Luke” Appling, from High Point, was inducted in 1964. In his 20-year career Appling hit over .300 sixteen times and, in 1936, was the first Chicago White Sox player and first American League shortstop to win the batting crown with a .388 mark. Durham native Rick Ferrell was a catcher for the St. Louis Browns, the Boston Red Sox, and the Washington Senators. He was behind the plate for all nine innings in the first All-Star Game ever played, July 6, 1933. Hertford native Jim Hunter earned five championship rings pitching in six World Series for the Oakland A’s and New York Yankees. A’s owner Charlie Finley gave his star pitcher the nickname “Catfish,” fabricating a story about Hunter catching a fish in the North Carolina backwoods. 1985 inductee Hoyt Wilhelm is still regarded as the game’s premier relief pitcher. The Huntersville knuckleballer holds virtually all lifetime relief marks. 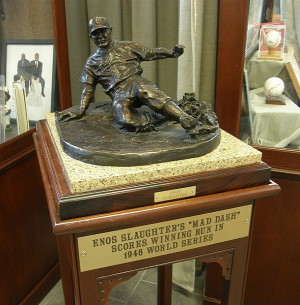 Enos “Country” Slaughter hailed from Roxboro and earned a reputation for being an outstanding clutch hitter. He batted over .300 in 19 seasons, made ten All-Star appearances, played in five World Series, and made the famed “mad dash for home” to help the St. Louis Cardinals beat the Boston Red Sox in the 1946 World Series.  Elected in 1991, Williamston native Gaylord Perry was the first pitcher to win the Cy Young award in both the American and National Leagues.  Finally, Walter “Buck” Leonard joined Satchel Paige and Josh Gibson as one of three Negro League stars inducted into the Baseball Hall of Fame in 1972.  Called the “black Lou Gehrig,” the Rocky Mount native played first base for the Homestead Grays in Pennsylvania and helped the team win nine consecutive pennants with his bat.  Leonard had a lifetime average of .340. 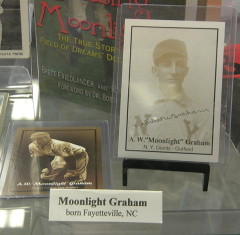 Among many wonderful mementoes from our national pastime is a baseball autographed by legendary outfielders Mickey Mantle, Willie Mays, and Duke Snider, signed bats from former Wilson Tobs player Rod Carew, and a Bull Durham movie poster signed by “Crash” Davis, the inspiration for Kevin Costner’s film persona.  Speaking of movies, fans of another Kevin Costner film, Field of Dreams, might be interested in seeing photos of the real “Moonlight” Graham in the Wilson museum; Graham was a native of Fayetteville.  Especially noteworthy is a poster extending get-well wishes to Enos Slaughter shortly before his death in 2002 and signed by dozens of Hall of Fame greats, including Reggie Jackson, Yogi Berra, Johnny Bench, Bob Feller, Stan Musial, Ozzie Smith, Lou Brock, Al Kaline, and Whitey Ford.  The Museum is open 10-4 Thursday-Saturday and 1-5 Sunday year-round.  Admission charged.  252-296-3048 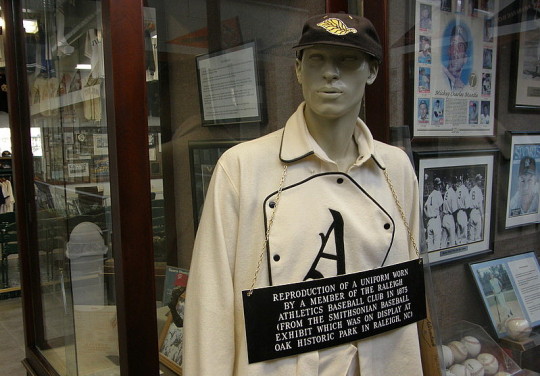 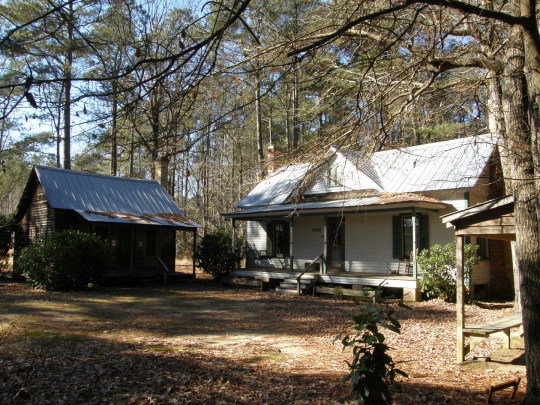 The Tobacco Farm Life Museum is in Kenly, a most appropriate site for a museum dedicated to preserving the heritage of life on a tobacco farm. At the beginning of the 21st century, almost one half of America’s total annual harvest of flue-cured tobacco – nearly one billion pounds – was being grown within a fifty mile radius of Kenly. Established in 1983, the Museum is the result of a grassroots effort among business leaders, townspeople, and local farmers to reclaim travelers who began by-passing the town when Interstate 95 opened. It achieves its goal of preserving the region’s heritage and celebrating the traditional values associated with life on the farm by means of numerous exhibits, a video, and a self-guided tour of a restored depression-era farmstead.

The Museum's video relies upon interviews to document step-by-step the journey tobacco takes from field to warehouse. Tobacco seedlings are first nurtured in greenhouses for about eight weeks before they are transplanted to the field. The average stalk grows about 15” in height and produces 15-20 leaves. The stalks are topped off, allowing the nutrients to go back into the leaves. The harvesting is done in three phases, with the bottom leaves being pulled first, the middle leaves second, and the top leaves last. The higher the leaf, the better the tobacco. The leaves are then cured, graded, and taken to market where they are inspected, then auctioned. For the average farmer, the sale of the tobacco gives him his first paycheck in ten months! 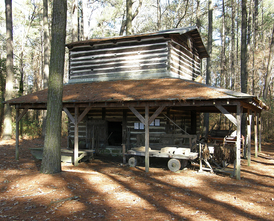 A 6,000 square-foot exhibition gallery displays a variety of farm implements, such “every day” household items as a wood-burning cook stove and other fixtures from great-grandma’s kitchen, and typical clothing circa 1915-1940, from work duds to “Sunday-go-to-meeting” clothes. Several display panels focus on the importance of soil con-servation. The Brown Creek Soil and Water Conservation District, established in North Carolina’s Anson County in August, 1937, was the first such district created in the United States. Fittingly, this district included the plantation birthplace of Hugh Hammond Bennett, director of the Soil Conservation Service from 1935-1952 and generally regarded as the “father of soil conservation.”

Behind the exhibit building stand several structures moved to the site from the Iredell Brown farm, five miles southwest of Kenly.  The oldest of these is a two-room structure built during the 1880s. This was the home for a family of seven until the “big house” was completed in 1910, after which the rooms of the original building were used as dining room and kitchen. Built at a cost of $155.35, the main house is a traditional one-story frame dwelling three bays wide with a central hall and rear shed rooms. Other original buildings include the tobacco barn, the smoke house, and the milk house. A representative pack house has also been reconstructed on the site. The Tobacco Farm Life Museum is open 9:30-5 Monday through Saturday and 2-5 Sunday. Admission charged. 919-284-3431 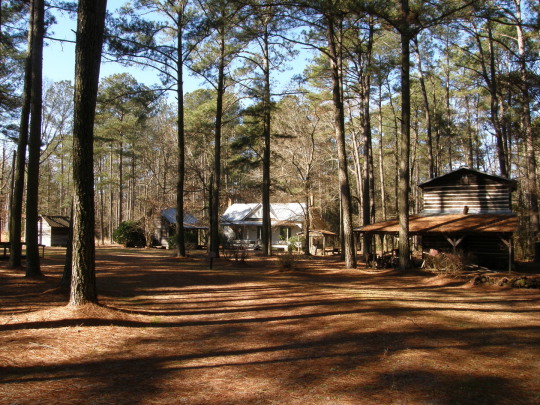