Scroll down this page or click on specific site name to view features on the following Lenoir County attractions/points of interest: 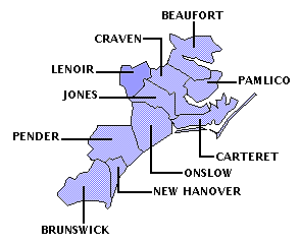 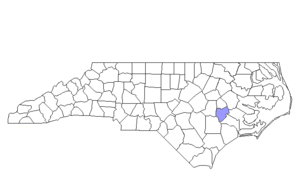 Created in 1791, the county is named for William Lenoir, a commander of American forces at the Battle of Kings Mountain, Speaker of the State Senate, and trustee of the University of  North Carolina.

The county seat is Kinston, a contraction of Kingston, in honor of King George III.  Other communities include Deep Run, Graingers, Institute, LaGrange, and Pink Hill.

It is worth noting that the hull of the Confederate ironclad CSS Neuse, on display at the state historic site in Kinston, is North Carolina’s largest Civil War artifact.

Below:  The Lenoir County Courthouse 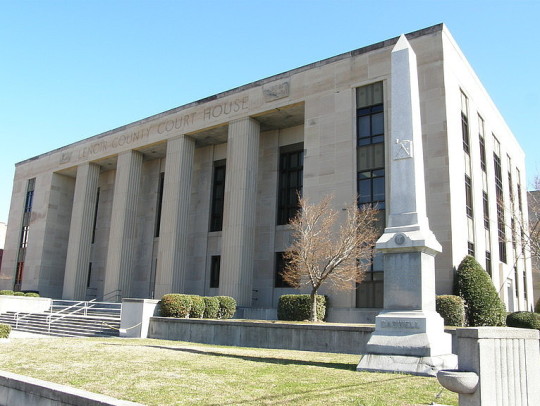 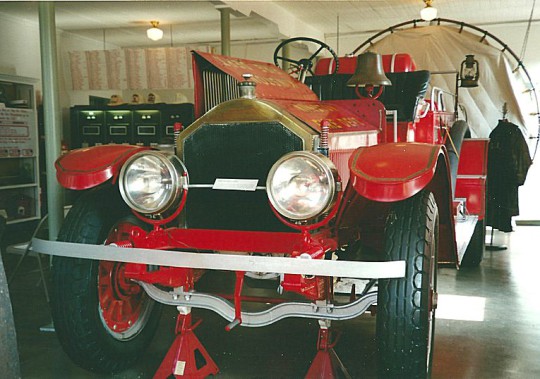 The Caswell No. 1 Fire Station Museum is adjacent to the Lenoir County Courthouse. This two-story red brick building was constructed in 1895, in the aftermath of a devastating fire that destroyed much of downtown Kinston. Among the artifacts on display in the museum is an original copy of the March 2, 1895 edition of the Kinston Free Press, detailing the magnitude of the destruction and urging citizens to raise the city from its ashes. Since Kinston’s newspaper office was among the many businesses claimed by the fire, this extra edition had to be printed by the Goldsboro Argus. The museum is visitor-friendly, and youngsters and young-at-heart alike are encouraged to take the wheel of the 1922 American LaFrance Pumper truck. Visitors are also invited to pull the switch on an old-fashioned telephone pole alarm box to see how signals were relayed to the fire station. Many of the items on display in the museum, which opened in 1993, come from the collection of Tony Kelly, a 40-year veteran with the Kinston Fire Department, and fire chief from 1989-1998. The Fire Station Museum at 118 South Queen Street has a somewhat limited operating schedule. Hours are 10-4 Tuesday, Thursday, and Saturday. It can also be seen by appointment. 252-522-4676 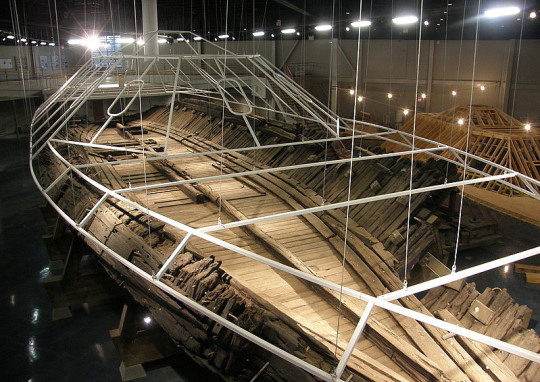 The CSS Neuse Civil War Interpretive Center in Kinston is starting to look ship-shape.  In 2012, the hull of the Neuse was moved from an open-air viewing shelter along the Neuse River on the outskirts of town to an enclosed, climate-controlled facility at 100 North Queen Street.   This new site, closed to the public for many months, has recently been opened, allowing visitors to see the hull of the Neuse in its new home; it also affords the public a rare opportunity to see the staff at work as it completes complimentary exhibits.  All displays are expected to be finished well before the 150th anniversary of the Second Battle of Kinston and the scuttling of the Neuse in March, 1865.

One of nearly two dozen ironclad gunboats built by the Confederacy during the Civil War, the Neuse was constructed over a period of several months at Whitehall, about eighteen miles upriver from Kinston.  Federals attacked the gunboat’s construction site in December, 1862, in hopes of destroying the craft, but they were driven off after causing only minor damage.  When preliminary construction was completed, the gunboat was floated downriver to Kinston to have her engine, iron plating, and armament mounted.  Delays in procuring iron, among other obstacles, prevented the Neuse from being finished in time to have any appreciable impact on the Confederate war effort, and the gunboat was scuttled by her own crew to prevent her capture when the Federals overran Kinston in March, 1865. 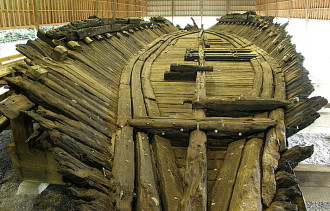 In 1961, the hull of the Neuse was raised and, soon thereafter, was exhibited to the public on the grounds of the Governor Caswell Memorial.  In 1998 the hull was moved to an open-air shelter on the property (see photo at left), giving it a modest degree of protection, but still leaving it subject to changes in temperature and humidity.   That problem has now been resolved.  In 2012, the hull of the Neuse was moved once again, this time to an enclosed, climate-controlled, 51,000-square-foot facility at 100 North Queen Street.  This building allows visitors to view the hull of the gunboat from ground level and from a mezzanine that extends from the starboard bow along the entire length of the 158-foot hull and across the stern.  Another major enhancement is the “ghost” skeleton of the gunboat’s superstructure, giving visitors a better visualization of what the Neuse actually looked like.

Many artifacts retrieved from the Neuse when it was raised are in the process of being prepared for display, including items from the ship as well as personal items belonging to her crew.  Among the more impressive artifacts are the ship’s bell and one of her original iron plates.  Other exhibits will focus on gunboat’s construction at White Hall, Kinston’s role during the Civil War, life on the home front, the Battle of Wyse Fork, the First and Second Battles of Kinston, and freed blacks who served in the Union Army.  Also under construction is a replica casemate, which will allow visitors to have a sense of what the gunboat looked like on the inside, and displays on weaponry and the lives of sailors.  Located on the mezzanine is a large picture window that overlooks the very place on the river where the Neuse was docked; the full-scale outdoor replica of the gunboat can also be seen from this vantage point.  Hours for the CSS Neuse Civil War Interpretive Center are 9-5 Tuesday-Saturday.  Admission is free.  252-527-2107 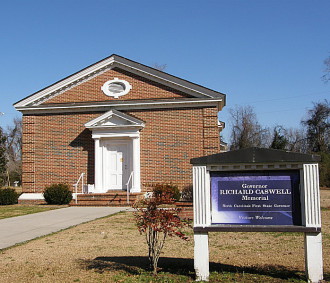 Richard Caswell was a prom-inent Kinstonian before, during, and after the Revolutionary War and remains one of North Carolina’s most distinguished public figures. Born in Cecil County, Maryland, in 1729, Caswell immigrated to North Carolina in 1745, settling near present-day Kinston. He became the apprentice to his father-in-law, James McIllwean, who was the surveyor general.   McIllwean introduced the young man to the world of politics, and for the remainder of his life Caswell was actively involved in state government. He was a member of the colonial assembly during the late 1760s, generally regarded as a moderate, well thought of by both his peers and Royal Governor William Tryon. During the Regulator movement, Caswell was sympathetic with the grievances of the frontiersmen, but he also stood firmly for the rule of law. As a result, he was a commander of militia forces supporting Governor Tryon in the Battle of Alamance in 1771, at which time he gained some nominal military experience. Five years later, he would again command the militia, this time in opposition to the British. As colonel of militia, Caswell was credited, along with Colonel Alexander Lillington, with the Patriot victory at Moore’s Creek Bridge in February, 1776. In April of that same year, Caswell was one of the delegates attending the 4th provincial congress in Halifax; as such, he voted in favor of the “Halifax Resolves,” the first official call for independence by any colony. An influential member of the 5th Provincial Congress, held in November, 1776, Caswell played a leading role in crafting North Carolina’s first state constitution and was chosen by his peers to serve as the state’s first governor. He served three consecutive one-year terms as governor, during which time he also acted as major general of militia.   In 1780, Caswell and General Griffith Rutherford, with a force of 1,200 state militia, joined General Horatio Gates and his Continental army in an effort to halt the British invasion of South Carolina. The patriots were soundly beaten, due largely to the poor showing of the militia. Throughout the war, Caswell’s active participation in state government continued uninterrupted. He served from 1781-1784 as comptroller before once again assuming the responsibilities of chief executive from 1784-1787. Caswell supported a strong central government and was selected by the state’s General Assembly to be a delegate at the Constitutional Convention held in Philadelphia in 1787. He declined the selection, however, and did not attend the convention due to ill health. A lifetime of public service ended when Caswell was stricken with paralysis while presiding over the state senate in Fayetteville. He died November 10, 1789. 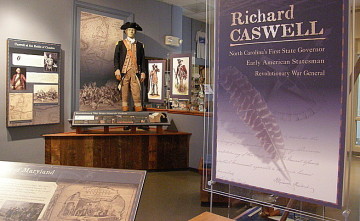 In the late 1940s, Kinstonians concerned that the small cemetery in which Richard Caswell was thought to be buried was being threatened by industrial development organized a protective association. Among the leading advocates was attorney John G. Dawson, who convinced the 1955 General Assembly to create a Caswell Memorial Commission and appropriate $25,000 for the purchase of the cemetery. An additional $18,000 in donations was raised by the commission, and the cemetery became state property in 1956. Indecision over the nature and scope of the memorial delayed action for nearly a decade. Finally, in 1966, the small brick building which serves as the Caswell Memorial today was opened to the public. This facility will remain open as a state historic site even though the new facility for the CSS Neuse on Queen Street is now open. The Governor Caswell Memorial is located on US 70 (West Vernon Avenue). Hours are 9-5 Tuesday-Saturday. Admission is free. 252-522-2091 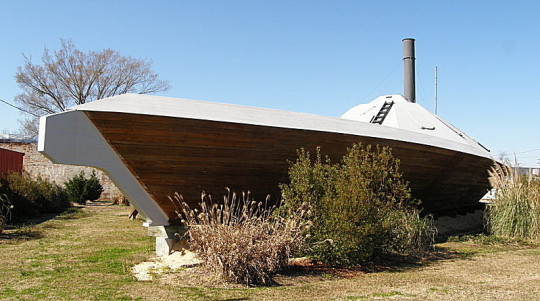 The CSS Neuse II, a replica of the Confederate gunboat, is located at the corner of Heritage and Gordon Streets, within site of the place where the original ironclad was docked.  The only full-scale replica of such a gunboat in the country, it is open for tours on Saturdays from 10-4. 252-560-2150 or 252-523-1954 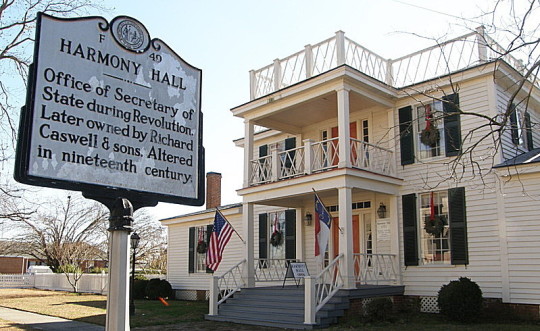 Harmony Hall, Kinston’s oldest building, was built in 1772 by Jesse Cobb and is one of the most historically significant buildings in the state. During the Revolutionary War period, it was owned by Richard Caswell, the state’s first elected governor. The house served as the de facto state capital from 1771-1781 and provided office space for Secretary of State James Glasgow. In the decades leading up to the Civil War, Harmony Hall was owned by the Peebles family, and the furnishings in the house today largely reflect the home’s antebellum period. Acquired by the Women’s Club in the 1930s, Harmony Hall is now maintained by the Lenoir County Historical Association. 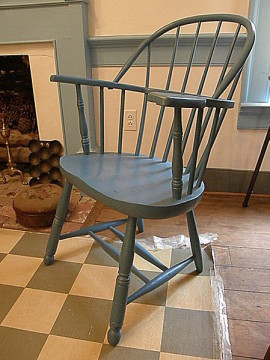 Caswell was a prominent Kinstonian before, during, and after the Revolutionary War and through a lifetime of public service, became one of North Carolina’s most distinguished public figures. As a member of the colonial assembly in 1762, Caswell introduced the bill which established the town of Kinston. In 1771, he was a commander of militia at the Battle of Alamance in opposition to the Regulators. In February, 1776, he was a leader of Patriot forces at Moore’s Creek. In April of that same year, Caswell served as a delegate to North Carolina’s 4th Provincial Congress, and thus was a member of the first colonial body to declare for independence. An influential member of the 5th Provincial Congress, Caswell played a leading role in crafting North Carolina’s first state constitution and was chosen by that body to serve as the state’s first governor. Caswell was a representative to the Continental Congress in Philadelphia, a general during the Revolutionary War, and a frequent member of the NC General Assembly. He served six one-year terms as governor. A public servant to the very end, Caswell died in Fayetteville in 1789, while presiding over the state senate. Harmony Hall is located at 109 East King Street. Admission is free. Tours are given by appointment 10-4 Tuesday-Saturday. 252-522-0421

The Neuseway Nature Park and Exchange Nature Center is located along the banks of the Neuse River in Kinston. Though small, the center offers up-close views of reptiles indigenous to North Carolina, an assortment of live and stuffed animals and waterfowl, a “touch tank,” and even a lower level “cave” exhibiting crawfish, turtles, fish and other wildlife common to the region. The 55-acre park also provides opportunities for camping, hiking and biking, canoeing, and fishing. The Exchange Nature Center on West Caswell Street is open 9:30-5 Tuesday-Saturday and 1-5 Sunday. Tuesday-Saturday hours are extended to 7 PM from May through September. Admission is free. 252-939-3367