Scroll down this page or click on specific site name to view features on the following Washington County attractions/points of interest: 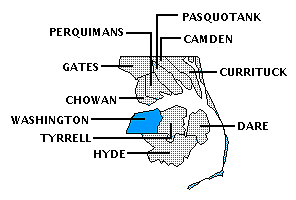 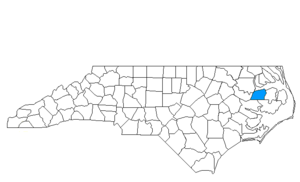 Created in 1799, the county was named for President George Washington.

The county seat is Plymouth, named for the town in Massachusetts.  Other communities include Cherry, Creswell, Hinson, Pleasant Grove, Roper, Scuppernong, Wenona, and Westover.

It is noteworthy that the most successful of the Confederate ironclads, the CSS Albemarle, played a key role in the Battle of Plymouth, fought April 19, 1864, when Rebel forces recaptured the town.

Below:  Plymouth's picturesque -- and historic -- waterfront 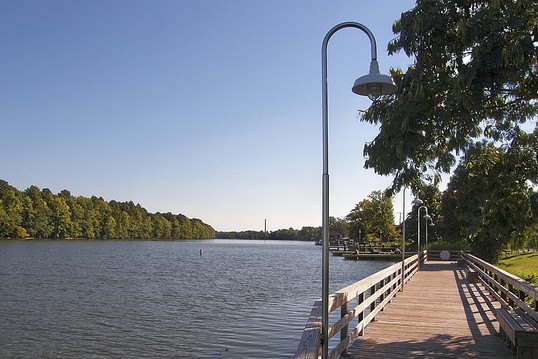 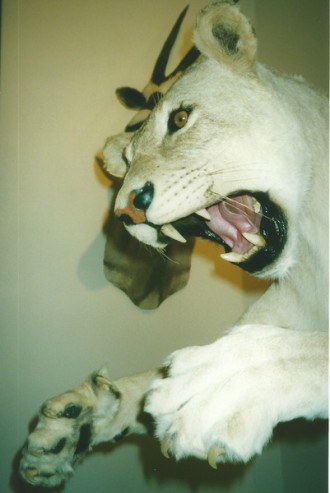 God’s Creation Wildlife Museum at 111 West Water Street showcases the private collection of Tom Harrison. The Museum features an amazing assortment of animals. Entitled “From Alaska to Africa, & the Wilderness In Between,” the exhibit includes a few animals indigenous to North Carolina – a black bear and coyote being two examples – but most come from more distant places. A Dall Sheep, for instance, was taken by Harrison in Alaska in 1994, in what he described as his most adventuresome hunt ever. With 44” horns, it was the biggest sheep harvested in Alaska that year. This and other animals from the northwestern frontier are displayed in front of a façade of an Alaskan trapper’s hut. Step through the door of the hut, however, and you’re instantly transported to the African plains. In this setting you’ll see a lioness, elephant, impala, bongo, and antelope. Elsewhere you’ll discover a Cape Buffalo, white rhino, and leopard. All of Africa’s “big game” animals are exhibited. God’s Creation Wildlife Museum is open 10-4 weekdays. Admission charged. 252-793-6600 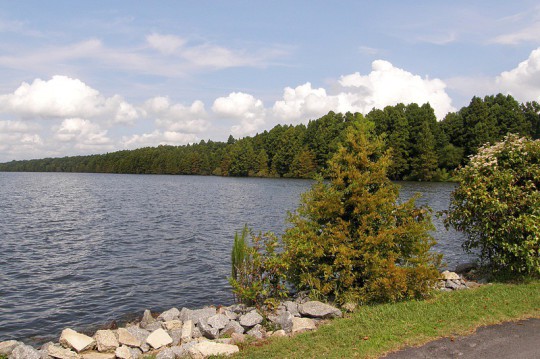 Pettigrew State Park, straddling Tyrrell and Washington counties, covers nearly 17,500 acres, including 16,600 of water. Lake Phelps is the second largest freshwater lake in the state and is one of the many Carolina “bay lakes,” so-called because of the abundance of bay trees growing nearby. Fed only by precipitation and springs, the average depth of Lake Phelps is four feet, and its maximum depth is only eight feet.  With 25 square miles of water surface, the obvious activities are fishing and boating. Those enjoying the former are likely to catch largemouth bass and bluegill in the spring and fall, yellow perch in the summer. Steady winds make Lake Phelps ideal for sailboating, but rowboats, canoes, and kayaks are popular as well. Boat ramps are located near the park’s information center. A family campground, picnic grounds, and rest rooms are also located here.  Several easy hiking trails are in the offing. The Bee Tree Canal walk leads to an observation platform with a good view of Lake Phelps. The Moccasin Canal Trail features a 300-foot boardwalk passing through a cypress forest, with other parts of the trail winding through stands of sycamore, gum, poplar, and bald cypress. 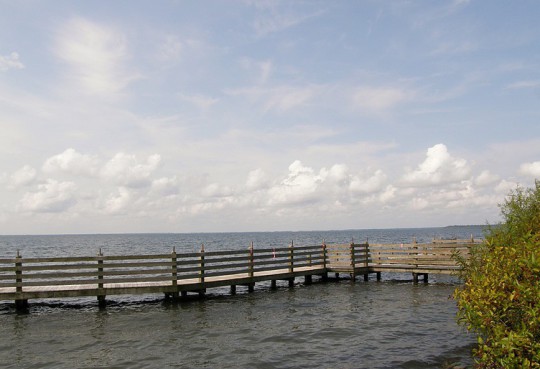 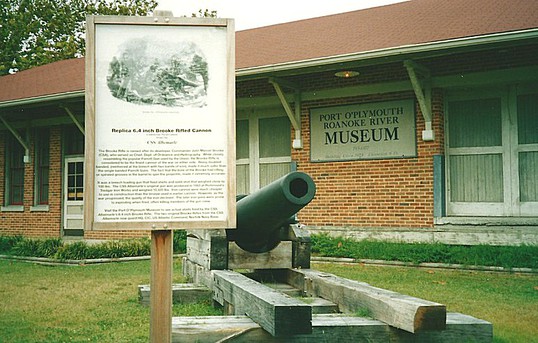 The Port O’ Plymouth Museum, one of the top ten Civil War sites in the two Carolinas, occupies the restored Seaboard Coastline train depot along the Roanoke River. Although the main focus of the Port O’ Plymouth Museum is interpreting the town’s role during the War Between the States, the facility also spotlights Plymouth’s early history as a port city, situated at the mouth of the Roanoke River at the western end of the Albemarle Sound. The seat of government for Washington County, Plymouth was established in 1787. It became one of the state’s six official ports of entry in the early 1800s, at which time Plymouth ranked ninth in population among NC towns. During the Civil War, the town’s strategic location made it important to both sides. Plymouth fell to Union forces in 1862. Using the town as a base of operations, the Federals were anxious to advance northwest, destroying the bridge at Weldon and cutting the Wilmington-Weldon railroad line. Loss of this crucial supply route would have had a disastrous effect on Confederate war efforts in the eastern theater. To counter this Union threat, rebel forces constructed Fort Branch along the banks of the Roanoke about twenty miles west of Plymouth. 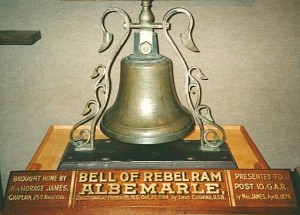 The Confederates also built the ironclad gunboat Albemarle, one of four such warships built in North Carolina during the war. Of these four, the Albemarle, under Commander James W. Cooke, was by far the most successful.   Joining with Confederate land forces led by General Robert F. Hoke, the Albemarle engaged in a combined assault on the Federals at Plymouth April 19, 1864. The gunboat sunk the Federal warship Southfield and severely damaged the Union ship Miami.   The Confederates recaptured the town, holding it for several months until a daring commando raid led by Lieutenant William Cushing sunk the Albemarle. Loss of the ironclad gave control of the river, and the town, back to the Federals. 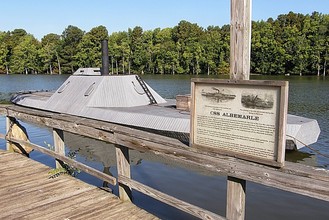 A worthy addition to the museum experience is the one-third-scale replica of the Ram Albemarle. This reproduction of the famous rebel ironclad was launched April 17, 2002 and measures 63 feet from bow to stern, 14 feet across, and floats on pontoons. Financed by local businessman Tom Harrison, the replica was built over a six-month period by Guy Macken using detailed plans of the gunboat to insure its accurate appearance. The scaled-down version looks authentic as it steams out to the center of the Roanoke River for firing demonstrations. The replica has working four cannons – “yacht guns” – that are fired during these demonstrations. A full-sized replica of the 37-foot launch used by William Cushing to torpedo the real Albemarle in 1864 has also been constructed. Macken built this craft as well, and during the October, 2002 re-enactment of Cushing’s raid on the Albemarle, he played the role of the flamboyant Yankee commando. Macken thus had the unenviable task of “sinking” the very ship he had built.

The Port O’ Plymouth Museum is open 9:00-4:00 Tuesday-Saturday. Admission charged. The Museum sponsors a Living History Weekend each April on the weekend nearest the anniversary of the Battle of Plymouth. 919-793-1377  In addition to seeing the museum, visitors can also take a self-guided stroll around the historic town or take advantage of the three “Walking Along the Roanoke” trails, ranging from a half-mile to two miles in distance along the scenic river. 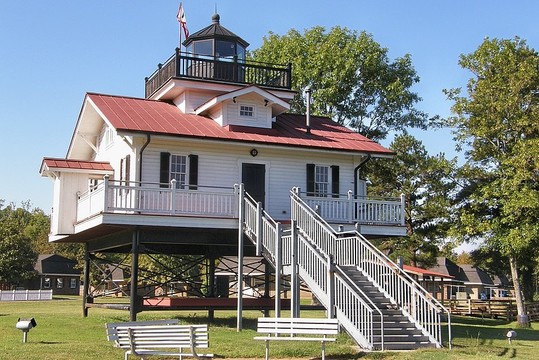 The Roanoke River Lighthouse is a faithful replica of an original beacon that stood some six miles down river from Plymouth, where the Roanoke enters into the Albemarle Sound.  The replica is located at the west end of Water Street in downtown Plymouth.  Guests can visit all three levels, including the small cupola at the top that houses the beacon. A few possessions belonging to Thomas Clifton, the first lighthouse keeper, are displayed. Clifton and his family had living quarters on the first floor and sleeping quarters on the second. For his services, Clifton was paid $560.00 annually. There are six categories or “orders” of lights, with such beacons as Cape Hatteras and Cape Lookout being equipped with first order lens, enabling their lights to be seen for many miles by ocean going vessels. The Roanoke River lighthouse, by comparison, had a fourth order lens. Across the street from the lighthouse is the Maritime Museum, displaying an assortment of boats from different time periods. Both lighthouse and Museum opened in September, 2002. Hours are 11-3 Tuesday-Saturday and 1-4 Sunday. Admission charged. 252-217-2204 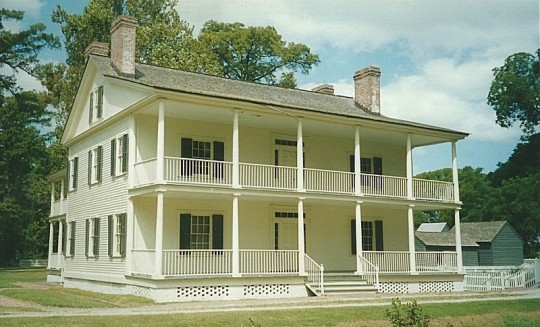 Somerset Place State Historic Site in eastern Washington County pulls double-duty, serving as both a testament to the vision and enterprise of Josiah Collins and his successors and to the industry and accomplish-ments of the plantation’s work force – West African slaves. At this historic site, equal attention is given to the daily life and living conditions of both master and slave. The goal of Somerset Place is to offer a comprehensive and realistic view of a large antebellum Southern plantation. 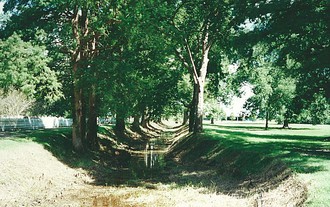 The Lake Company began in 1784, when Josiah Collins of Edenton, with two partners, ar-ranged for eighty slaves to be imported from West Africa for the purpose of digging a six-mile canal from Lake Phelps to the Scuppernong River. The canal was begun in 1786 and finished two years later. Upon completion of this task, the slaves set about transforming the marshlands of Somerset into a thriving rice plantation. Familiar with growing rice, they were able to produce profitable crops within a few seasons. By 1790, the site included two saw mills, a grist mill, and a four-story barn. 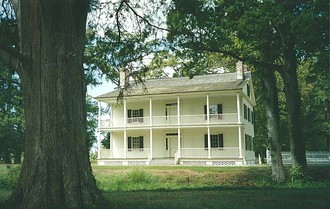 Success bred success, and over time Somerset established itself as one of North Carolina’s largest and most profitable plantations. By 1816, Collins bought out his partners and became the sole owner. Although he never actually lived on the plantation, Collins nevertheless renamed it Somerset in honor of his family’s ancestral home in England. Josiah Collins, Jr. inherited the plantation upon his father’s death, but it was not until 1829, when Josiah Collins III acquired the property, that Somerset actually became home to the Collins family. It was then that the 14-room, three-story, Greek Revival mansion was built near Lake Phelps, fronting the canal that was the plantation’s lifeline. 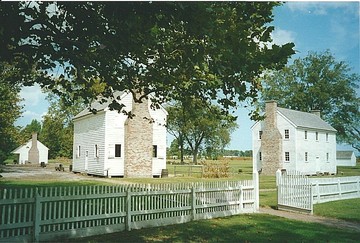 At the outset of the Civil War, more than 300 slaves worked 2,000 acres of land. Crops included rice, wheat, oats, corn, peas, beans, and flax, and sawmills located on the plantation produced large quantities of lumber. The war meant financial ruin for the plantation, however, and despite efforts to continue operations in the years immediately following, Somerset’s prosperity was at an end. In 1889, the property was sold out of the Collins’ family. Acquired by the state of North Carolina in 1939, it was originally made a part of Pettigrew State Park. In 1965, the NC General Assembly designated Somerset Place as a state historic site, and money was appropriated to refurbish the mansion and surviving outbuildings and to acquire period furnishings.

The Colony House, one of Somerset’s original dependencies and first used by the plantation’s minister and tutors, now serves as the visitor center. One room serves as an orientation area, detailing how the operation grew over time from the Lake Company venture into one of the largest privately-owned plantations in the state. Guided tours of the 6,800-square-foot main house and kitchen last about one hour, after which visitors can continue on a self-guided tour of the property. Included among the original outbuildings are the dairy, smokehouse, salting house, rations house, and kitchen/laundry. One of the original canal locks can be seen almost directly in front of the mansion. Replica one-room and four-room slave quarters stand near the reproduction plantation hospital. A reconstructed overseer’s house is also on the property.