Scroll down this page or click on the specific site name to view features on the following Hyde County attractions/points of interest: 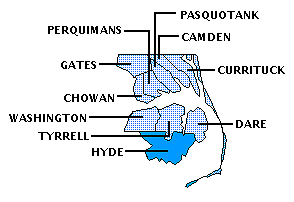 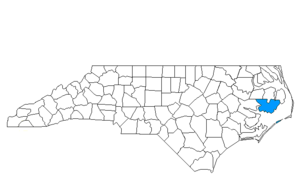 Created in 1712, the county is named for Edward Hyde, a Royal Governor of colonial North Carolina.

The county seat is Swan Quarter.  Other communities include Englehard, New Holland, and Ocracoke.

It is worth noting that Lake Mattamuskeet, North Carolina’s largest natural lake, is located in Hyde County. 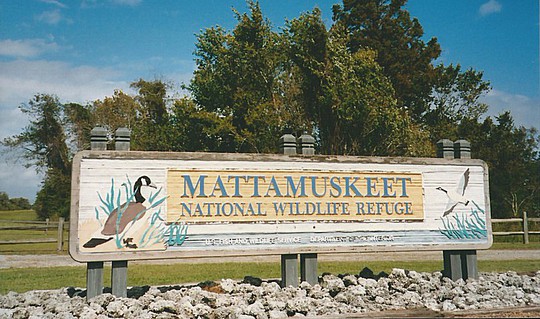 Mattamuskeet National Wildlife Refuge, located near the center of Hyde County, encompasses the largest of North Carolina's numerous "bay lakes."  In 1585, sixty English explorers from Sir Walter Raleigh’s first Roanoke Island settlement visited Lake Mattamuskeet. 428 years later, North Carolina’s largest natural lake is still a good place to explore, and approximately 100,000 visitors take advantage of this natural treasure annually. Remarkably, Mattamuskeet presents a view to today’s visitors not unlike that which greeted those European adventurers more than four centuries ago. Of unknown origin, the lake is supplied only by run-off water – there are no underground springs or headwaters feeding it. Belying its size – Mattamuskeet is eighteen miles long and seven miles wide – it is extremely shallow, only a few feet at its deepest points. Situated midway between Maine and Florida, it is a major point along the Atlantic Flyway.

The federal government established the Mattamuskeet National Wildlife Refuge in 1934 to provide and maintain a safe habitat for migratory waterfowl and for such endangered species as bald eagles, peregrine falcons, and American alligators, as well as offering wildlife-related recreation and environmental education to the public. The lake itself covers four-fifths of the 50,180-acre refuge; a freshwater marsh, forested wetlands, croplands, and forested uplands cover the remaining acreage. 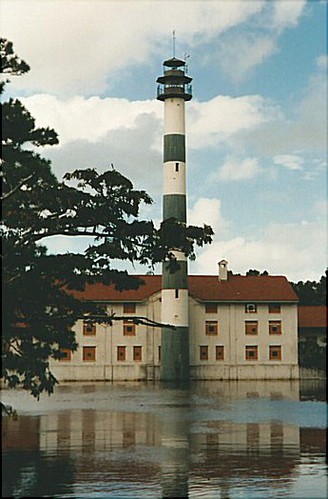 Without question, the single most prominent feature of the lake is the old Mattamuskeet Lodge. To the undiscerning eye, the structure looks like a black-and-white-banded lighthouse attached to a three-story factory. In reality, the tower was a smokestack for the pumping station which was built in the mid-1910s along the south-central side to drain water from the lake. Since Lake Mattamuskeet is several feet below sea level, in order to drain the lake, water had to be pumped into a 7-mile, navigable canal built above sea level, after which gravity would carry the water to the Pamlico Sound. By draining the lake, thousands of acres of fertile land was made available for farming. At various times from 1916 to 1932, Mattamuskeet was in fact drained and the land farmed. In 1933, however, after draining operations had ceased, the newly-established Civilian Conservation Corps arrived on the scene and began a four year project that transformed the pumping station into a fashionable hotel and restaurant. Opening in November, 1937, the Mattamuskeet Lodge operated for 37 years, and earned a reputation as one of the finest hunting lodges in the country. From statesmen and socialites to everyday citizens, all were welcomed equally. 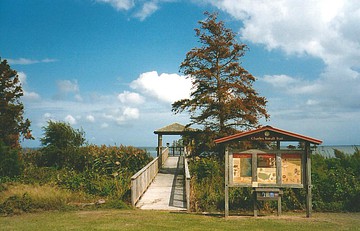 Today, Lake Mattamuskeet is one of the stops along the Charles Kuralt Trail. Boating, fishing, crabbing, and simply reconnecting with nature are the popular pastimes. Fishing boats and motor boats are permitted on the lake from March through October. Chicken necks and fish heads are the favorite bait to catch the lake’s large blue crab. Mattamuskeet is a freshwater lake, and anglers can expect to hook largemouth bass, striped bass, and catfish. Although Mattamuskeet once had a reputation as the premier place in which to hunt Canadian geese, hunting is no longer permitted. Nowadays, shooting is limited to picture taking, and the tranquil beauty of Lake Mattamuskeet makes it an ideal place to let the shutterbug in you escape. Speaking of pictures, in photographs of the Carolina coastline taken from space, perhaps the only man-made structure readily discernable is the 7-mile stretch of NC 94 that runs north-south across Lake Mattamuskeet. For more information, call the National Wildlife Refuge office at 252-926-4021. 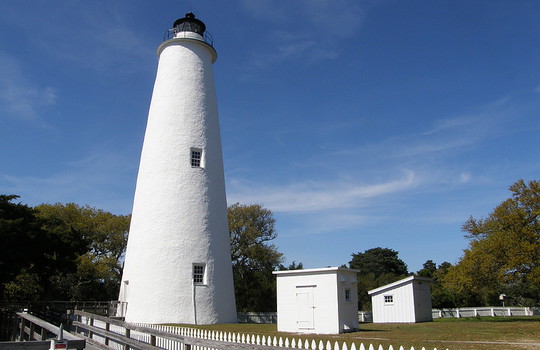 Ocracoke Village, unlike the heavily commercialized and developed towns along the northern Outer Banks such as Nags Head, Kill Devil Hills, and Kitty Hawk, still retains a quaint charm that endears itself to visitors. Located at the southern tip of Ocracoke Island, it is accessible only by ferry, boat, or plane. With the exception of the village itself, Ocracoke Island, approximately 16 miles in length, is part of the Cape Hatteras National Seashore. The icon of the barrier island village is, of course, the famous Ocracoke lighthouse. Built in 1823, the 75-foot beacon is the oldest operating lighthouse in the state. Although the tower is closed to the public, a portion of the lighthouse grounds is open to visitors, so it’s easy to get good views and photos of this sturdy Tar Heel sentinel. 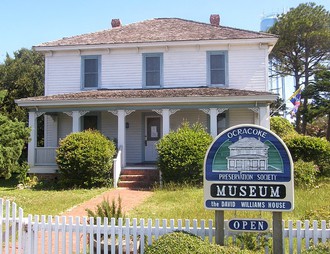 The Ocracoke Preservation So-ciety welcomes visitors to its museum, which has been set up in the David Williams House since 1992. Williams was the first captain of the Life-Saving Service Station on Ocracoke and his house,  listed in the National Register of Historic Places,  was built circa 1900.  The museum includes a parlor, kitchen, and bedroom featuring vintage furn-ishings common to the island’s inhabitants in years gone by. The Maritime Room showcases items related to the sea, while visitors to the Brogue Room will get a quick introduction to the distinctive “Hoi Toide” speech you won’t hear anywhere else but Ocracoke. 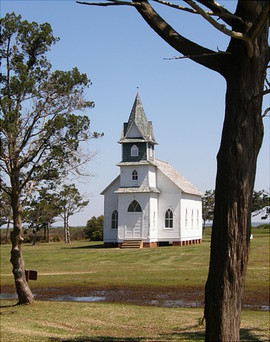 A 15-minute trip by private ferry takes visitors across to the northern tip of Portsmouth Island. Once there, you can explore the remains of the "ghost town" that bears its name. Abandoned since 1971, the village was once the largest settlement on the Outer Banks, and was a major shipping center for over 100 years. Buildings open to visitors include the Life Saving Station, Methodist Church, and Post Office and General Store. Portsmouth Island is part of the Cape Lookout National Seashore, and the National Parks Service oversees Portsmouth Village. En route to the island you’ll see where Fort Ocracoke stood during the early days of the Civil War. On the return trip, you’ll see Teach’s Hole, where, in 1718, the infamous pirate Blackbeard and his crew locked in mortal combat with Captain Maynard and his British sailors.  Speaking of English seamen, four British sailors are buried in Ocracoke. In May 1942, a German U-boat sank the HMS Bedfordshire off Cape Lookout. The bodies of four of her crewmen washed ashore near Ocracoke and were buried on the island. Today, the Union Jack flies over their final resting place and the small plot of land has been deeded to the British Government.

About seven miles north of town is a 180-acre enclosure that protects about two dozen of the islands most celebrated inhabitants – the famed Ocracoke ponies. The horses were corralled for their protection in 1959, shortly after NC 12 opened.

Ocracoke Village bustles during the summer, and there are over 100 specialty shops, stores, and restaurants which cater to tourists. Ocracoke Island is also a popular spot for beachcombing, sunbathing, and surf fishing. During summer months, it’s advisable to make advance reservations if you’re planning to take either the Swan Quarter or Cedar Island ferries to Ocracoke – the same applies to your return trip to the mainland. These ferry crossings take about 2-¾ hours each and will carry you across Pamlico Sound to safe harbor at Ocracoke’s beautiful Silver Lake. If you’re taking NC 12 south from Nags Head, reservations are not needed for the Hatteras-Ocracoke ferry, but you should anticipate lengthy waits. This much-loved highway will take you past both the Bodie Island and Hatteras lighthouses and through the Pea Island National Wildlife Refuge and Cape Hatteras National Seashore. For ferry schedules, call 800-BY-FERRY. 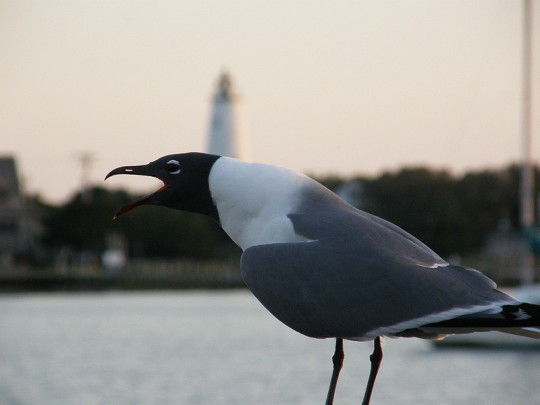 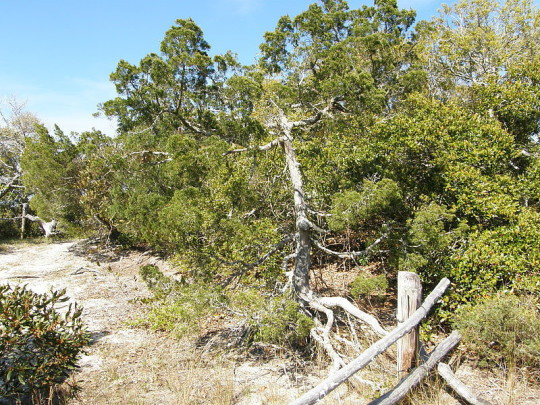 Springer’s Point Nature Preserve on Ocracoke Island is one of North Carolina’s lesser known natural treasures.  The Nature Preserve is owned by the Coastal Land Trust, which used grant funds from the State Clean Water Management Trust Fund to purchase a 31 acre tract of land in 2002 and a 91 acre site, known as the McWilliams Tract, in 2006.  The 122-acre Preserve, which opened to the public in May, 2006, protects one of the last undeveloped sections of land on the southern tip of Ocracoke Island and contains an ancient maritime forest, wet grasslands, pockets of salt marsh, and a small strip of beach facing Pamlico Sound and overlooking the spot known as Teach’s Hole.

The pirate Edward Teach, better known as Blackbeard, had a short but successful career plundering all along the Carolina coast, frequently using Ocracoke Island as a safe haven, specifically the area now protected by the Preserve.  In the end, Ocracoke wasn’t quite as safe as Blackbeard had imagined.  In November, 1718, Teach and his crew were beset by two English ships under the command of Lt John Maynard.  A fierce fight ensued, during which Blackbeard was shot and stabbed repeatedly before finally succumbing.  Maynard ordered Teach’s head be cut off and hung from the yardarm as proof that the infamous pirate had in fact been killed.  The headless body was thrown overboard.  Popular legends soon had it that Blackbeard’s body made seven laps around the pirate’s ship in search of its head.  Today, Ocracoke storytellers challenge the veracity of that legend, suggesting that the body could have made two, maybe three, laps at best. 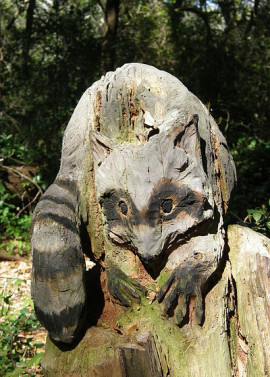 To some extent, Springer’s Point may be the best kept secret in Ocracoke.  The trailhead is located only a short walk from the Ocracoke lighthouse, but, by design, there is no public parking available at the site.  The idea, perhaps, is to have visitors prepare themselves for a relaxing walk through the Preserve by first taking a quiet walk from the parking areas located around Ocracoke Village.  The trail itself can be easily overlooked, since it leads unobtrusively from the road past neighboring rental cottages toward the Sound.  The path through the Preserve is an easy, half-mile loop over mostly flat terrain and there are lots of benches along the way.   Visitors will pass tall grasses and flowering yucca bushes and will likely spot some of the island’s wildlife:  opossums, lizards, egrets, and herons.  Centuries-old live oaks, with their sprawling, twisted limbs, provide many shady spots.  The sound front view includes the iconic Ocracoke lighthouse, about a quarter-mile distant.  During good weather, visitors will likely see lots of activity on the water, with colorful sailboats, fishing boats, and kayaks dotting the sound. 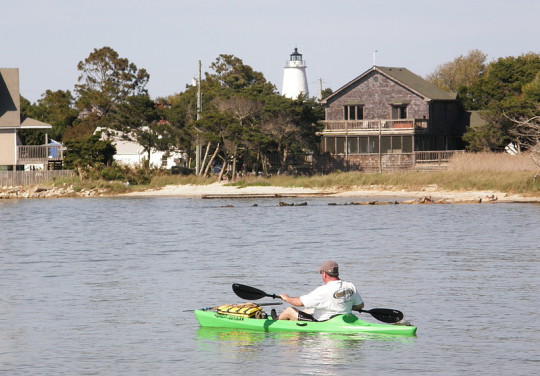