Scroll down this page or click on specific site name to view features on the following Chowan County attractions/points of interest: 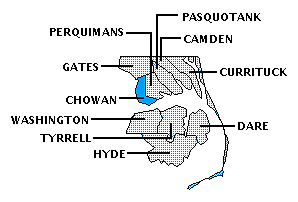 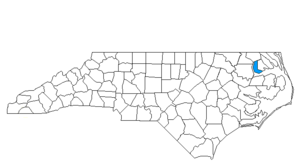 Created in 1668, the county is named for the Chowan River, the name of which was derived from the Chowanoac Indian tribe.

The county seat is Edenton, named for Charles Eden, one of North Carolina’s Royal Governors.  Other communities include Hancock, Ryland, Tyner, and Vahalla.

It is worth noting that the Edenton Tea Party, held in October, 1774, was the first political action taken by an organized group of women anywhere in the American colonies; the result of the meeting was a number of resolves in which the women pledged their intent to boycott English tea and cloth as a means of protesting “taxation without representation.” 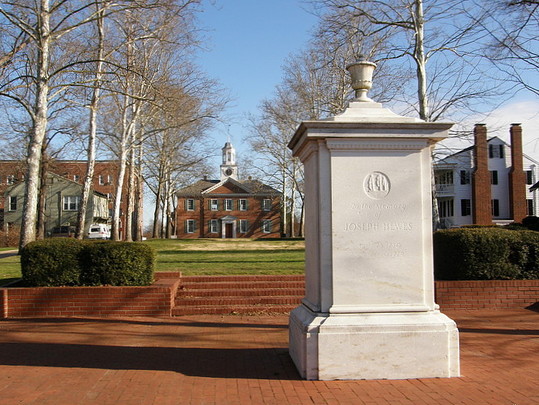 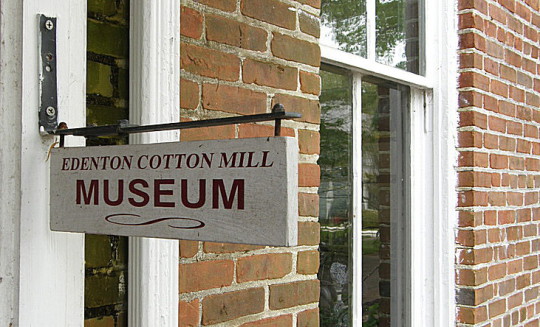 The Edenton Cotton Mill Museum of History benefits from its location in one of the best preserved, most intact mill villages in the state.  Added to the National Register of Historic Places in February, 1999, the property includes the mill building itself (now repurposed), about 70 houses, miscellaneous out buildings, and the mill office building.  The latter now serves as the home of the Museum.  The facility is the result of the efforts of many of the so-called “Cotton Mill Kids” who, during a homecoming in 2005, first started talking about working together to preserve and present to the public the history of both the mill and the people who worked and lived there.  The single exhibit room is filled with photographs of the workers and their families, on the job, at home, and at play. The artifacts displayed are ordinary, everyday items associated with the mill:  newspaper want ads, payroll sheets; stock certificates; shuttles and spools; a night watchman’s time clock; and so on.  The most bittersweet item might be the last package of yarn produced at the Edenton Cotton Mill in the 1990s.  Hours are 10-2 Saturday and Sunday.  Admission is free. 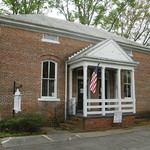 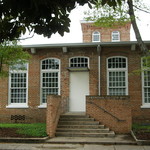 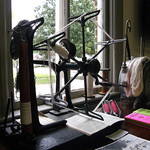 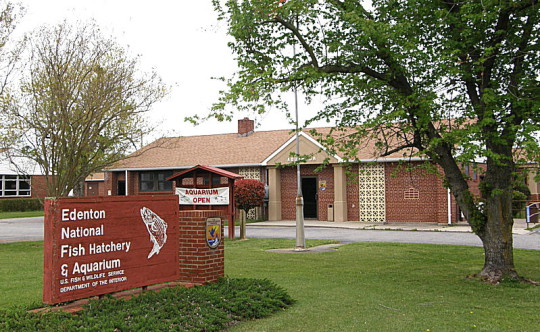 The Edenton National Fish Hatchery is one of the oldest such facilities in the country, having been estab-lished in 1898.  Operated by the U. S. Fish & Wildlife Service, the 63-acre facility is one of fourteen hatcheries in the south-east; fish raised here are used to stock public waters.  The Edenton location primarily raises Atlantic striped bass and American shad.  The Edenton hatchery also provides fishery management assistance to the numerous National Wildlife Refuges located in eastern North Carolina and to the state for the Chowan-Nottoway-Meherrin-Blackwater River system.  Visitors can walk around the hatchery ponds on their own from 7 AM to 3:30 PM every day year-round.  A stop on both the Charles Kuralt and North Carolina Birding Trails, the facility also has a nature walk that features a raised boardwalk leading through a natural wetland.  Finally, the site includes a small aquarium with one 700-gallon tank and three smaller tanks showcasing some of eastern North Carolina’s aquatic species.  Tours for large and small groups can be scheduled in advance.  252-482-4118 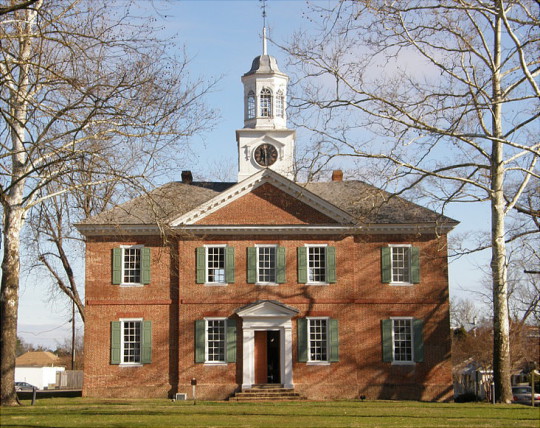 Historic Edenton State Historic Site includes several buildings in what many people consider one of the prettiest towns in the South. Visitors who take the two-hour, one-mile walking tour of the famed historic district may well find themselves in agreement.  Edenton, situated on Edenton Bay at the head of the Albemarle Sound, is North Carolina’s fourth oldest town, after Bath, New Bern, and Beaufort.  It was incorporated in 1722.  Originally known as "The Town on Queen Anne's Creek," it was renamed Edenton in 1722 in honor of the late Royal Governor Charles Eden.  The town served as the de facto seat of colonial government for nearly twenty years and was one of North Carolina’s official ports of entry. The guided walking tour of Edenton encompasses several city blocks, including the most historic and fashionable areas of the town. 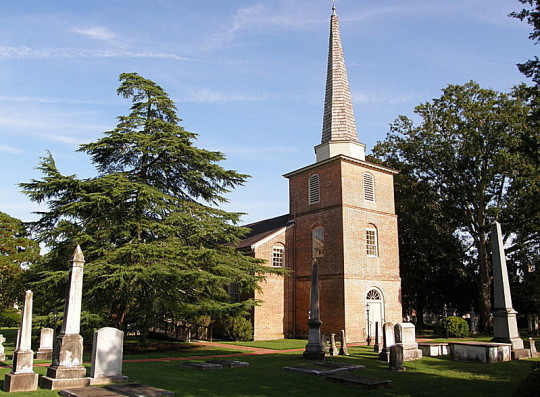 Included on the tour is St. John’s Episcopal Church, across the street from the Visitor Center. St. John’s is the second oldest surviving house of worship in the state, begun in 1736 but not completed until thirty years later. Royal Governor Eden is interred in the church cemetery, as are fellow colonial governors Thomas Pollock and Henderson Walker.  Also on the tour is the Cupola House, built circa 1758 for Francis Corbin, an agent for Lord Granville. The Jacobean-styled home is open as a house museum and features impressive Georgian interior woodwork. The building’s distinctive cupola allowed Corbin to get early sightings of ships as they were coming into harbor. 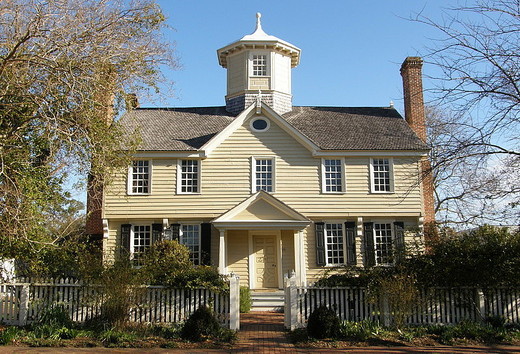 The Barker House, moved to its current location near the bay in the 1950s, was the home of Penelope Barker, famous for her involvement in the so-called “Edenton Tea Party.” In October 1774,   Mrs. Barker invited  fifty  neighborhood  ladies to a tea  at a friend’s house and  succeeded in having them pledge their support for a non-imporation act previous passed by North Carolina's First  Provincial  Congress.   This  effort  on  the  part of the Edenton ladies is considered to be the 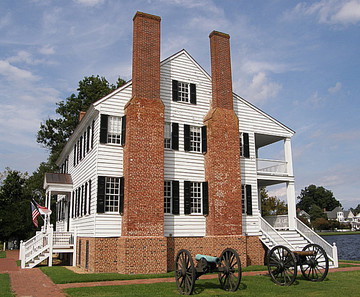 first action of a strictly political nature taken by a body of women anywhere in the colonies. A teapot has been Edenton’s symbol ever since, and a bronze teapot, placed along the village green in 1905, can be seen on the tour.  Facing the village green is the 1767 Chowan County Court-house.   Remarkably, this public building served the county  for more than  200 years and is  nationally recognized  as being one of the finest surviving examples of Georgian architecture in the South.  Behind the courthouse is the old county jail, dating to 1825, and also included on the tour.

Finishing up the tour of Historic Edenton is the James Iredell House. Along with William R. Davie, James Iredell was one of North Carolina’s chief proponents of the federal constitution in 1788. After North Carolina ratified the constitution in 1789, President Washington chose Iredell to serve as one of the members of the first US Supreme Court. The Iredell House is a handsome, two-story Federal-style building and is listed on the National Register of Historic Places. The original home was built in 1800 and a substantial addition was made in 1827. Historic Edenton is open 9-5 daily except for state holidays between November and March. Admission charged. 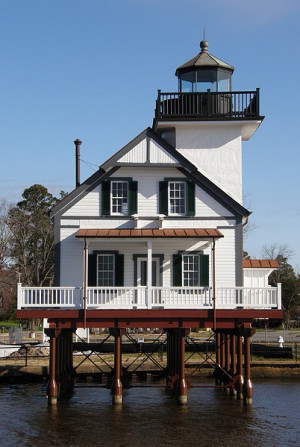 The Roanoke River Lighthouse, built circa 1886, is the last survivor of fifteen such screw-pile light stations that once illuminated North Carolina’s inland waterways.  Origin-ally positioned in the Albemarle Sound to mark the entrance to the Roanoke River near Plymouth, the lighthouse was decommissioned in 1941.  It was sold years later to a private individual, moved to dry land in Edenton, and used as a home. The station was purchased by the Edenton Historical Commission in 2007 and moved to the waterfront. In May, 2012, the station was moved again, this time to its permanent location over-the-water in Edenton Bay.  The Roanoke River Lighthouse is thought to be the last remaining original screw-pile light station in the entire country.