Scroll down this page or click on the site name to view the feature on the following Pasquotank County attraction/point of interest:

Museum of the Albemarle 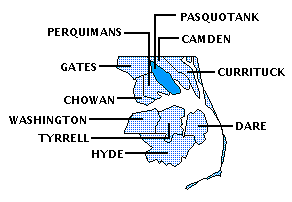 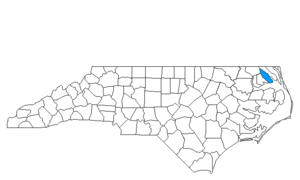 Created in 1668, the county is named for the Native American tribe.

The county seat is Elizabeth City, named for the wife of Adam Tooley, owner of the land on which the town was built.  Other communities include Morgans Corner, Nixonton, and Weeksville.

It is worth noting that the first land grant in present-day North Carolina was acquired by Nathaniell Batts at the Pasquotank County Courthouse in 1660.

Museum of the Albemarle

Elizabeth City’s Museum of the Albemarle isn’t exactly new. Rather, it has been the northeastern regional branch of the NC Museum of History for many years. What is new, at least relatively speaking, is the facility. Once housed in a small, single-story brick building away from the downtown area, the Museum now occupies a massive 50,000 square-foot structure across the street from Elizabeth City’s scenic waterfront along the Pasquotank River. But while the building has changed, the Museum’s goal remains unaltered – to showcase artifacts spanning more than four centuries that will help visitors gain a better understanding of the environment, culture, and development of the Albemarle region – rightfully called the “Cradle of North Carolina.” The new facility has only been open since April, 2006, and its galleries and exhibits have slowly but surely been completed. 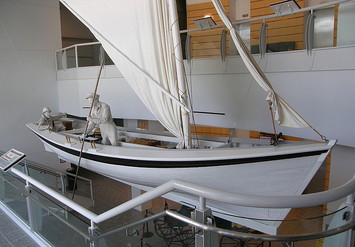 The items displayed are im-pressive, starting with the century-old shad boat sus-pended over the lobby, a craft well-chosen to repre-sent the boat-building heritage of the Albemarle region. The NC General Assembly named the shad boat the official state boat in 1987 for good reason. A descendant of the periau-ger, a carved hull boat that originated with Albemarle settlers in the late 1600s, shad boats – named for the type of fish they were used to catch – are known for their maneuverability and are particularly adept at navigating the North Carolina coastal waters. George Washington Creef, a Roanoke Island native, is credited with the design of the shad boat. The one on display in the Museum was built by Alvirah Bell Wright in 1904 and has been completely restored. 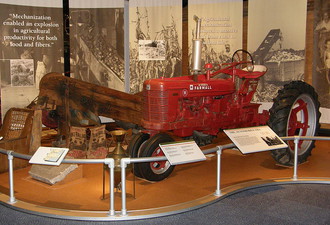 Two other noteworthy items displayed along the stairway leading from the lobby to the second floor galleries are an American flag and a painting. The World War II memorial flag was donated by Jack Hoffler who, at age 14, was the youngest combat-sailor to participate in the D-Day invasion. This flag has flown over the American cemetery at Omaha Beach, the Navy Memorial at Utah Beach, the Tomb of the Unknown Soldier at Arlington, and atop the US Capitol. The painting, done by Francis Vandeveer Kughler, was the fourth of fourteen murals originally hung in the Joseph Palmer Knapp building at UNC-Chapel Hill, home of the Institute of Government. This particular mural depicts King Charles II meeting with the eight Lords Proprietors who received from the King the Carolina Charter of 1663. Among these gentlemen is George Monck, Duke of Albemarle, the individual for whom the northeastern region of North Carolina is named. 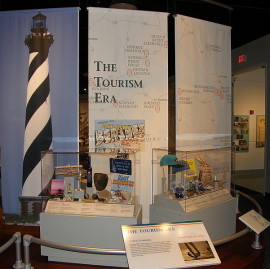 A focal point of the large second floor gallery is the Jackson House, a Pasquotank County home dating back to 1755. Along the gallery walls, items are grouped into the following time periods: Maritime Era (1792 and before), Canal Era (1793-1880), Railroad Era (1881-1910), Automobile Era (1911-present), and Tourism Era.  Furniture and farm implements share space with such diverse items as the smokestack from the Confederate ironclad CSS Albemarle, an early 1900s printing press, an 1882 Inez steam fire engine, Wright Brothers memorabilia, and a 1950s-era lunch counter. Exhibited on the first floor are items salvaged from the wreck of the French ship Sacred Heart of Jesus. It was this ship that brought to America in 1777 the cannons which are now mounted at the foot of the courthouse green in Edenton. An exhibit entitled “Albemarle Silver” showcases silverware from across the state. The Museum is open 9-5 Tuesday through Saturday and 2-5 Sunday. 252-335-1453

MUSEUM OF THE ALBEMARLE

Pasquotank County is bordered by CAMDEN, GATES, and PERQUIMANS counties.