Scroll down this page or click on specific site name to view features on the following Swain County attractions/points of interest: 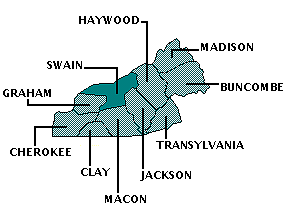 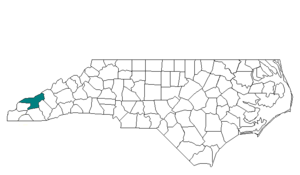 Created in 1871, the county is named for David Lowry Swain, a North Carolina governor and president of the University of North Carolina.

The county seat is Bryson City, named in honor of its founder, Captain Thaddeus Dillard Bryson.  Other communities include Almond, Birdtown, Cherokee, and Nantahala.

It is worth noting that a large part of the Qualla Boundary, the reservation for the Eastern Band of Cherokee Indians, is located in Swain County.

Below:  The outdoor drama Unto These Hills has been a traditional summertime attraction to Cherokee for six decades. 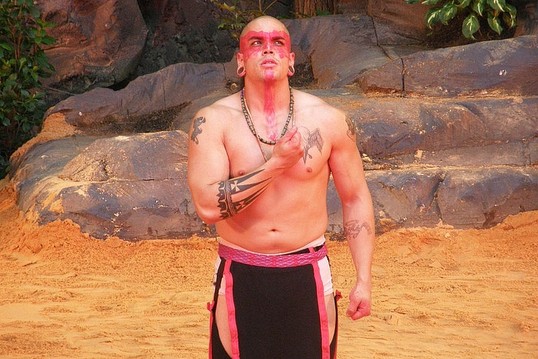 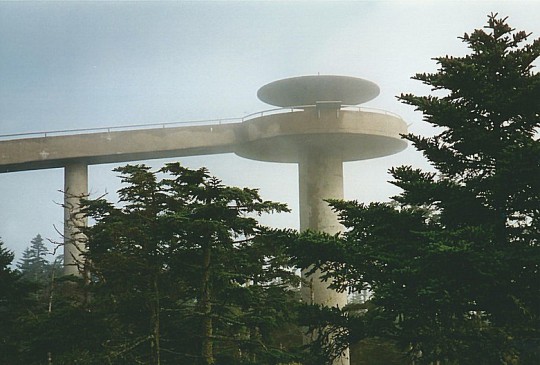 A trek to the top of Clingmans Dome is quite literally the “high point” of a visit to the Great Smoky Mountains National Park. Straddling the North Carolina-Tennessee border, Clingmans Dome is the third highest peak in the Tar Heel State, the highest elevation in the Volunteer State, and the highest point along the 2,174-mile Appalachian Trail, which stretches all the way from Maine to Georgia. The Mountains-To-Sea Trail, which upon completion will wind more than 900 miles across North Carolina to the Atlantic Ocean, also begins near the top of Clingmans Dome. On a clear day, you can see a hundred miles from the circular observation tower atop the summit; when the mist rolls in, seeing a hundred yards is an achievement. 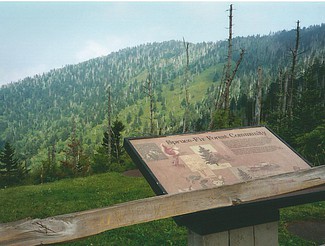 Back in the mid-1800s, Asheville attorney Thomas Lanier Clingman and UNC professor Elisha Mitchell were engaged in a “lofty” – and well-publicized – debate over which North Carolina mountain peak was the highest. As early as 1835, Mitchell had determined that a peak originally known as Black Dome was the highest in the eastern United States. In 1844, however, after conducting other measurements in the area, Mitchell came to a different conclusion, deciding that another peak in the Black Mountains was actually taller. Mitchell’s new assertions were contradicted by findings published that same year by Clingman, who argued that Black Dome was, in fact, the highest peak in the Appalachians. Thirteen years later, in 1857, in an effort to settle the question, Mitchell returned to Black Dome to conduct further experiments. Sadly, while on a solo outing, he lost his footing while skirting a waterfall and fell to his death. Black Dome was renamed Mount Mitchell later that same year in honor of the late professor. Further experiments proved that Mitchell’s original findings, and those which followed later by Clingman, were correct – at 6,684 feet, Mount Mitchell is the tallest mountain east of the Mississippi. In 1858, in recognition of Clingman’s contributions, the name of the third highest peak in the eastern United States – and the tallest in the Great Smoky Mountains – was changed from Smoky Dome to Clingmans Dome. The U. S. Geological Survey marker at the summit designates the spot to be 6,643 feet above sea level. 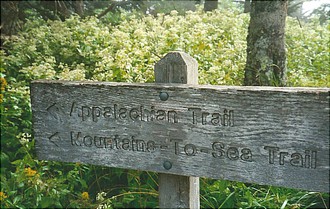 The paved trail from the parking lot to the summit of Clingmans Dome is quite steep, gaining 330 feet in elevation over its half-mile length. Most visitors take about 30 minutes to make the assent, allowing for a few stops along the way. Awaiting them is a 45-foot circular observation deck constructed in 1960, which replaced the original wooden tower built by the Civilian Conservation Corps in 1937. Looking a bit like something from a 1950s science fiction movie, the tower offers panoramic vistas in every direction. Specific landmarks seen on clear days include Fontana Lake, Newfound Gap Road, Mount Mitchell, and Cold Mountain. Signage points to the locations of the towns of Pigeon Forge, Gatlinburg, and Cherokee. 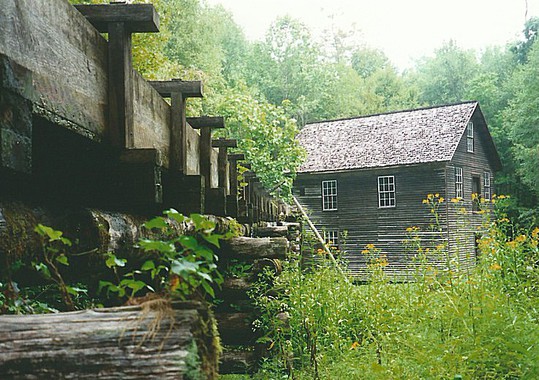 Great Smoky Mountains National Park, averaging from 8 to 10 million visitors annually, is the most visited park in the system.  That statement alone gives good evidence that this is a special place.  The park covers thousands of square miles in northwestern North Carolina and southeastern Tennessee. Points of interest on the North Carolina side include the Mountain Farm Museum, adjacent to the Oconaluftee Visitor Center, and Mingus Mill, one-half mile north of the Center.  Built in 1886, the historic grist mill uses a water-powered cast iron turbine to power its equipment.  Corn meal is still produced at the mill and is available for purchase.  Clingman’s Dome, on the North Carolina-Tennessee border, is the third highest peak in the Eastern United States.  A steep, half-mile walk leads to an observation tower with inspiring views of the Smokies in all directions.  At Cataloochee Valley, several buildings remain from the days before the national park was established, including a church and schoolhouse. Elk were released in the valley in 2001, and visitors have an excellent chance to see members of the herd grazing in the fields, especially in early morning and evening hours.  Waterfalls near Bryson City include Indian Creek, Juney Whank, and Toms Brand Falls.  The park is open 24 hours a day, 365 days a year.  Some secondary roads, visitor facilities, and campgrounds are closed during winter.  All roads are subject to temporary closure due to weather.  Entrance to the park is free.  865-436-1200 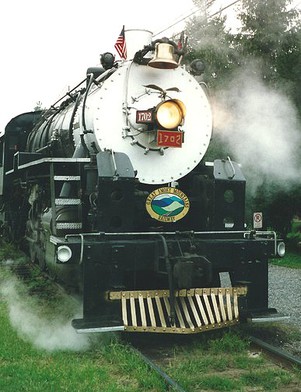 The Great Smoky Mountains Railroad celebrated its 25th year of operation in 2013! For the 2014 season, a variety of scenic excursions are scheduled daily, along with special dinner ex-cursions on weekends.  Trains make daily morning and afternoon round-trips from Bryson City to the Nantahala Gorge; daily morning and afternoon round-trips also operate between Bryson City to Dillsboro. Either trip offers diverse scenic views and different passenger cars provide different amenities.  Spring, summer, or fall, there's no better way to enjoy the rugged beauty of western North Carolina than on board the Great Smoky Mountains Railroad. 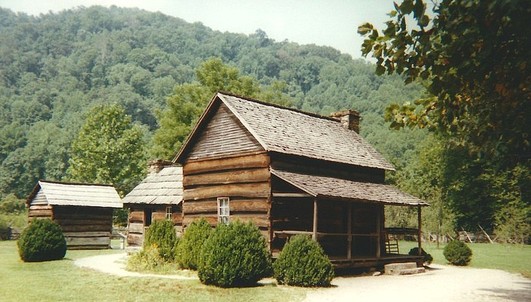 Mountain Farm Museum is located adjacent to the visitor center entering the Great Smoky Mountains National Park from Cherokee. The site includes a collection of buildings, most of which date to around 1900 and all but one of which were relocated here from other nearby areas. The farmhouse and dependencies provide a glimpse of the rural lifestyle of the region and help to preserve the cultural heritage of the Smokies. The focal point of the farm is the log house, constructed of chestnut logs with chinks between the logs sealed with hand-split boards rather than clay. The logs are joined with half-dovetail notches. The numerous outbuildings tell a lot about typical rural life. The meat house, for example, was mostly used to store pork. Hogs were butchered in the fall, then heavily smoked or salted to help preserve the meat through the winter and spring. Although livestock on the farm included a work horse or two, milk cows, cattle, sheep, and chickens, hogs were the most numerous and most important. Hogs were prolific, easy to keep, and inexpensive to feed. Meat was easy to preserve, and lard could be used for cooking and soap making.

The hen house, obviously, gave shelter to the chickens, which provided the farmer and his family with eggs, meat, and feathers for pillows and mattresses. Other fowl kept on the farm may have included geese, ducks, turkeys, and guineas. Because of the good growing conditions found here, apples were the most common fruit for area farmers, and an apple house was commonly found on their farms. The fruit was not only eaten raw, but also provided the source for cider, vinegar, apple sauce, and apple butter. A corn crib was, after a barn and a privy, probably the first dependency to be built on a farm. Corn was the most important vegetable a farmer could grow because of its many varied uses. It not only provided a hearty food source straight off the cob but, when dried and shelled, it could be taken to a mill and ground into cornmeal for cornbread or hominy. Cobs were used to start fires; husks were woven into chair seats, made into ropes, mops, or rugs, used as stuffing for mattresses, or even – with a little imagination – fashioned into dolls. Even the dried leaves provided fodder for winter feed for the livestock.

Other dependencies at the farm museum include a woodshed, molasses shed, blacksmith shop, springhouse, and barn. Of all the buildings at this open-air museum, only the barn is original to the property.

Museum of the Cherokee Indian 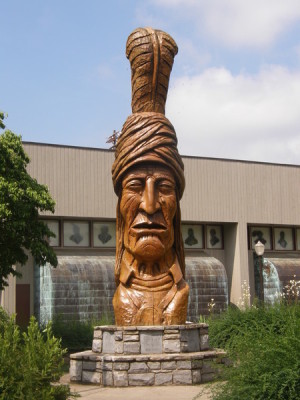 The Museum of the Cherokee Indian, which first opened its doors in 1948, is the oldest cultural and tourism attraction in Cherokee. The Museum moved to its present facility in 1976. A $3.5 million renovation in 1998 added space and infused new technology with traditional exhibits. The resulting mix of computer-generated imagery and special effects with life-sized dioramas, showcased artifacts, and interpretive exhibits provides an overview of Cherokee history that will appeal to all age groups. Across the street from the Museum is the Qualla Arts & Crafts Mutual, a tribal-owned-and-operated arts and crafts cooperative selling an assortment of native crafts from more than 300 local artisans, including intricate beadwork, decorative woven baskets, wood carvings, and highly distinctive black pottery.

MUSEUM OF THE CHEROKEE INDIAN 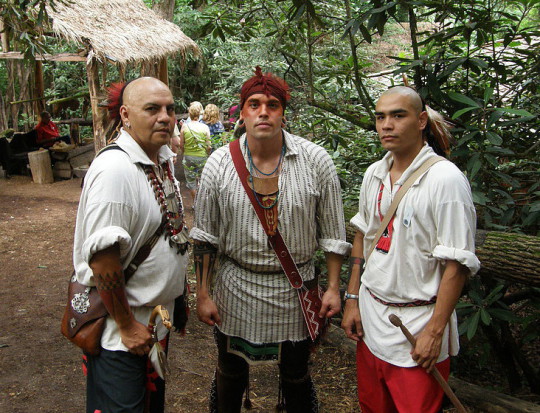 The Oconaluftee Indian Village, nestled on a mountainside isolated from the town’s busy thoroughfares, gives visitors an opportunity to experience the feel of a Cherokee village circa 1760. Guided tours take guests through an active community filled with native artisans.   Visitors learn about tribal occupations while watching interpreters complete routine activities and gain an understanding of Indian social and religious customs by visiting the tribal Council House and typical 18th and 19th century Cherokee homes.   Historical re-enactments are featured at the village during the summer months. Oconaluftee Indian Village is open daily from mid-May through late October from 9-5:30.

Smoky Mountain Trains is anything but child’s play. Ranked as one of the Top Ten such museums in the country, the Bryson City facility boasts one of the largest Lionel train collections in the nation, with over 7,000 pieces of engines, cars, and accessories valued at more than one million dollars! It took fifteen people eighteen months to create the detailed 1,000-square-foot layout, which has a full mile of track, 71 switches, operating crossing gates, a freight yard with 300 cars, a roundhouse with working turntable, and lots of animation. Those who enjoy riding the Great Smoky Mountain Railroad will almost certainly appreciate seeing miniature versions of rail cars click-clack their way around this impressive display. Admission to the Museum is included with any GSMR train excursion ticket. 866-914-5200