Scroll down this page or click on specific site name to view features on the following Jackson County attractions/points of interest: 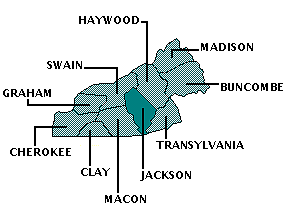 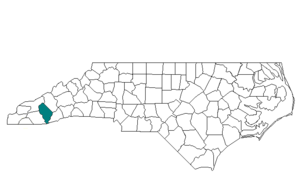 Created in 1851, the county is named for United States President Andrew Jackson.

The county seat is Sylva.  Other communities include Balsam, Cashiers, Cullowhee, Dillsboro, and parts of Cherokee, Highlands, and Sapphire.

It is worth noting that much of Jackson County lies within the Nantahala National Forest.

Below:  Whitewater Falls, along the Jackson-Transylvania county line, plummets more than 400 feet and is one of the tallest cascades in the southeast. 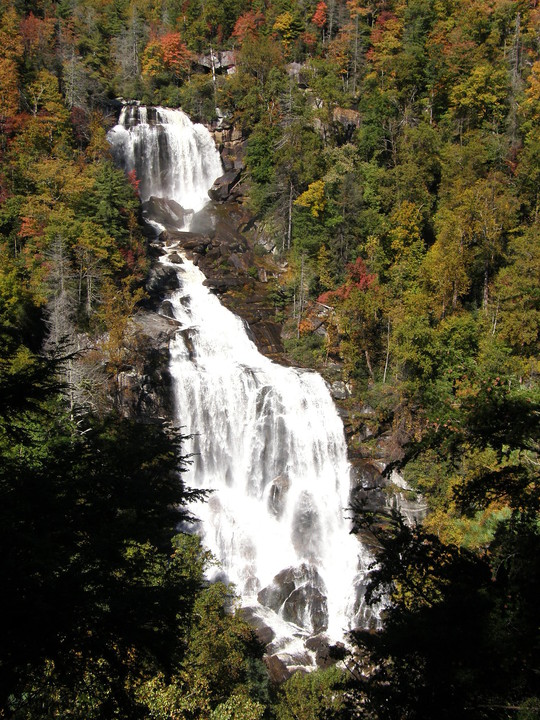 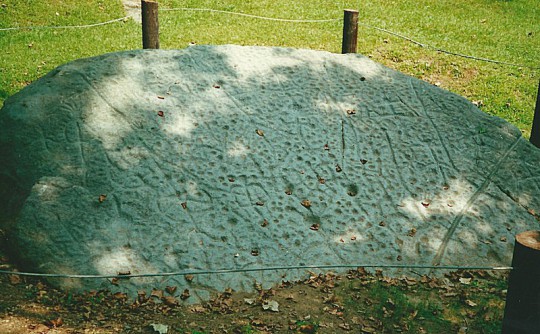 Judaculla Rock, one of western NC’s oldest and most mystifying landmarks, is found only a few miles south of Cullowhee. Forty-eight feet in circumference, this soapstone boulder is covered with about 150 glyphs – circles, lines, crosses, and human and animal shapes. These “messages of a vanished race” are thought to have been carved more than a thousand year ago. According to Cherokee legend, however, the markings are actually the result of a slant-eyed giant named Tsul’ Kalu’, who made an 8-mile leap from the top of Balsam Mountain and landed near this boulder in Caney Creek valley, scratching the rock with his seven-fingered hand as he did so. 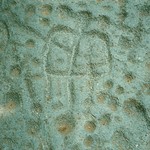 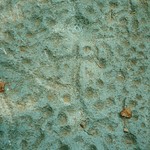 The Mountain Heritage Center is located in the H. F. Robinson Building on the campus of Western Carolina University in Cullowhee.  The Center has three major galleries, the first of which is a permanent exhibit dealing with the migration of the Scotch-Irish people to western North Carolina in the last quarter of the 18th century.  The other two galleries, plus smaller display areas in the lobby, house temporary and traveling exhibits on a variety of subjects, generally of a historic nature.  Regular hours are 8-5 Monday through Friday, with hours extended to 7 PM on Thursday, and select Saturdays in summer and fall.  The Center observes the university holiday schedule.  Admission is free.  828-227-7129 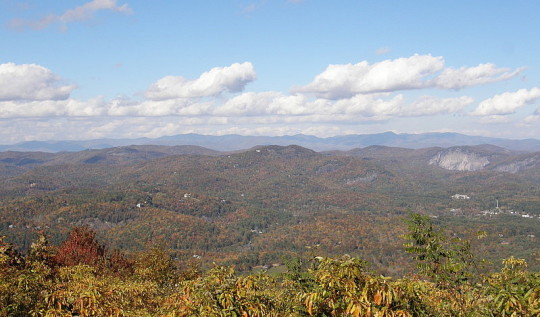 Whiteside Mountain is located in the Nantahala National Forest, along US highway 64 between Cashiers and Highlands.  The mountain, situated along the Eastern Continental Divide, is managed by the US Forest Service. Whiteside’s western slope features the highest sheer rock cliffs in the Eastern United States; these granite cliffs, embedded with quartz crystals, reflect the sunlight and give the mountain its name.    Although the elevation tops out at 4,930 feet – some 1,000 feet above the Chattooga River below – the walk to the top is comparatively easy.  The path leads through a forest of northern red oak, hemlock, yellow birch, and red maple.  Depending upon the season, hikers can be on the lookout for a variety of wildflowers and plants as they make their way up.  Once the crest has been reached, however, it’s all about the panoramic vistas.  Appropriate adjectives to describe the views include “stunning,” “spectacular,” “breathtaking,” and “majestic.”

There are many excellent vantage points along the crest of the mountain, each offering a different perspective on the forested landscape below and the mountains beyond.  In 1985, peregrine falcons were successfully reintroduced to the mountain and it’s common to spot these raptors in flight, perched on outcroppings, or nesting on the exposed rock faces. 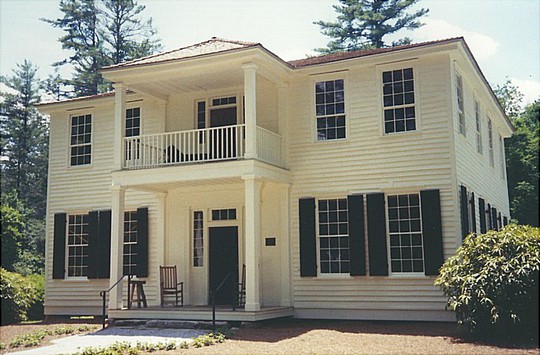 The Zachary-Tolbert House in Cashiers, with the exception of having no electricity, plumbing, central heating, or interior paint, has all the comforts of home.  All the comforts, that is, of a typical mountain home in 1850, that is. A tour of this two-story Greek Revival-style house today provides a fascinating glimpse at mid-19th century life in western North Carolina.

When the Cashiers Historical Society was formed in 1996, its primary goal was to preserve the 150-year-old Zachary-Tolbert House, an important historic building which was falling into disrepair. In 1998, Tom and Wendy Dowden bought the property and donated the house and its furnishings to the Society. An extensive three-year restoration process began shortly thereafter, and the refurbished house opened for tours in 2001. The Zachary-Tolbert House is listed on the National Register of Historic Places, is one of the most significant historical buildings in western NC, and showcases what is believed to be the largest collection of Southern Plain-Style furniture made by a single identifiable individual anywhere in the United States.

Colonel John A. Zachary and his family were among the first white settlers to Cashiers Valley, moving to the area in 1832 from Surry County. Mordecai Zachary, one of the colonel’s three sons, started clearing land for the house he envisioned as early as 1842. Felled trees were taken to the family saw mill and cut into lumber for the home’s construction. Ten years later, 29-year-old Mordecai presented the house as a wedding present to his new bride, Elvira Keener. The couple had thirteen children over the course of their marriage, all but one of them born in this house. Along with his father and brothers, Mordecai Zachary was a skilled craftsman, and he was responsible for making almost all the furniture used by his ever-growing family. Identified as Southern Plain-Style furniture, it is characterized by clean lines, functionality, and durability. When the Zachary family moved from the house in 1873, they left most of the furnishings behind. Subsequent owners used the furniture, and then passed it on when the house was sold. The result is that much of the original furniture crafted by Zachary still remains in the house. Among the many pieces displayed are a three-part table and massive cupboard in the dining room, round tables in the parlor, half-moon bedsteads and double wash stands in the bedrooms, and interesting ladder back chairs and side tables in virtually every room. The unusual single dovetail used by Zachary is evident in many pieces.

For many years, the house served as a boarding house for travelers to Cashiers Valley. After its purchase in 1873 by Armistead Burt of Abbeville, SC, the house was used as a summer home by him and subsequent owners, including the Parker family and four generations of the Tolbert family. Since it was only being lived in for brief periods of time, the house was never modernized. Even today, the only concession to modern conveniences is in the form of security devices. The old expression “If walls could talk” takes on new meaning at the house. Interior walls have never been painted, revealing hundreds of notes scribbled in every room of the house. Much of the graffiti is illegible, but that which is readable marks simple moments in life, such as the note on the first floor stairway that “Charlie Zachary took his first step the 10th day of April 1870.” The house is also a stop on the NC Civil War Trail. Proving that the War Between the States was truly a civic war, Mordecai Zachary supported the Southern cause and had sons serve in the Confederacy. Mordecai’s brother, Alexander, was a staunch Federalist, as were many other Cashier Valley residents. From US 64 in Cashiers, turn south onto NC 107. The Zachary-Tolbert House is two miles on the right. The home is open for guided tours 11-3 Fridays and Saturdays from June through mid-October. Suggested donation is $5.00 per adult. For additional information, or to arrange tours at other times, call 828-743-7710.