Scroll down this page or click on specific site name to view features on the following Haywood County attractions/points of interest: 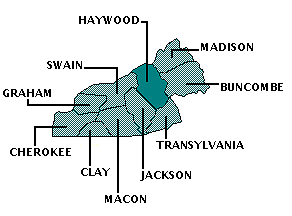 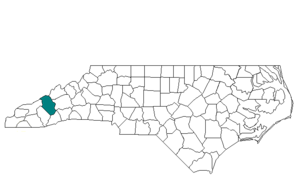 It is worth noting that the Great Smoky Mountains National Park and the Pisgah National Forest cover a large portion of the county. 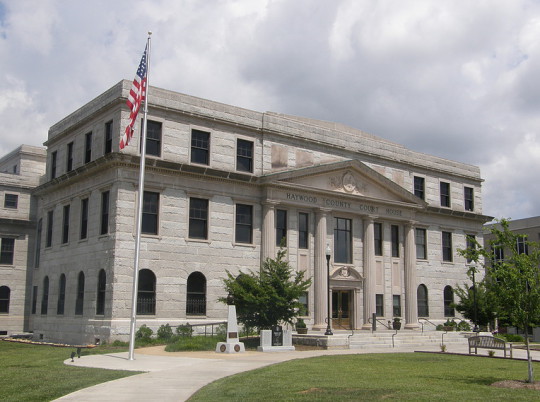 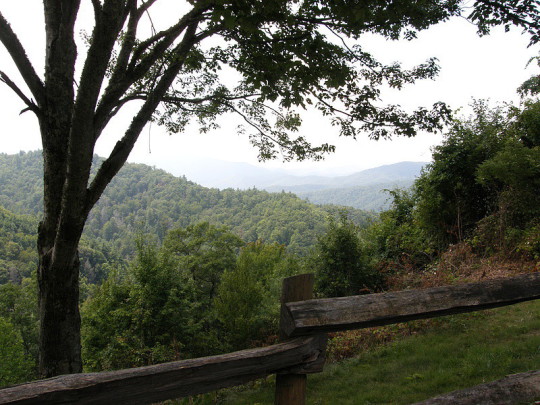 Promotional brochures for historic sites often invite visitors to “step back in time.” Travel to Cataloochee Valley, in the Great Smoky Mountains National Park, and you truly do journey back to a different place and time – in this case, rural North Carolina of the early 20th century. An interstate highway is only 10 miles and 30 minutes away, but it might as well be 50 miles and 100 years. Take Exit 20 off I-40, drive .2 miles on Route 276, and then make a sharp right onto Cove Creek Road. Follow the signs 11 miles into the valley. Cove Creek is a winding road with some parts paved, some parts gravel; it is also narrow, so drivers may need to stop or back up to allow oncoming motorists to pass. 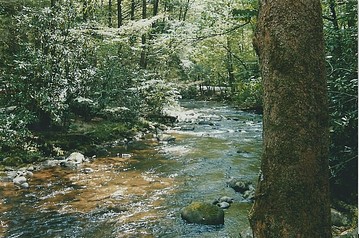 Cataloochee might be considered North Carolina’s version of Tennessee’s Cades Cove. With only a scattering of buildings remaining, it’s hard to imagine that the Cataloo-chee Valley was once a flourishing community, home to some 1,200 people as recently as the early 1920s. While most made their living by farming, some capitalized on early tourism, boarding fishermen and other visitors who were vacationing in the mountains. Even today, Cataloochee Creek is a popular destination for anglers, with wild trout being the most common catch. Families began moving out of the valley after the national park was established in the late 1920s, and most were gone by the early 1940s. 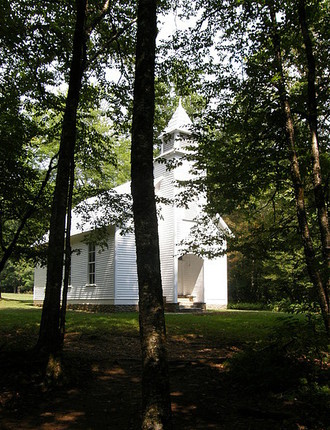 A self-guiding auto tour booklet is available for $1.00 at a roadside box on the left hand side of the road near the entrance to the valley. In addition to giving background history, the booklet provides a map of buildings that can be visited, such as the two-room Beech Grove schoolhouse (built in 1907), the Caldwell house (1903), and the Caldwell barn. Other open buildings include the Palmer Chapel, a quintessential white-framed country church built in 1898, and the Palmer House, which started out as a log cabin built by George Lafayette Palmer in 1869. It was later enlarged by his son Jarvis, who also added weatherboarding. One room of the Palmer house now contains a few exhibits and has a video in which some of the valley’s former inhabitants share their memories. A springhouse, smokehouse, and barn are also found on the property. 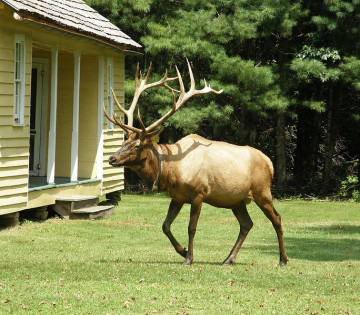 Old buildings, though, aren’t the only things to be found in the valley. Elk were reintroduced to the park in 2001 and herds can often been seen grazing in the fields, usually in the early morning and evening hours. Deer and turkey are also commonly seen. The spooky-sounding Booger-man Trail, a seven-mile loop weaving its way through the forest, beckons to hikers, as do several other trails, some of which lead to log cabins. Visitors should take advantage of the scenic overlook on the right side of the road as they head down into the valley. A primitive campground with 27 sites and a horse camp are located in the valley and are open mid-March through October; sites must be reserved in advance. Cataloochee Valley is open year-round. No admission fee. There is no visitor center, but comfort stations (no running water) are located at the Palmer House and near the schoolhouse. 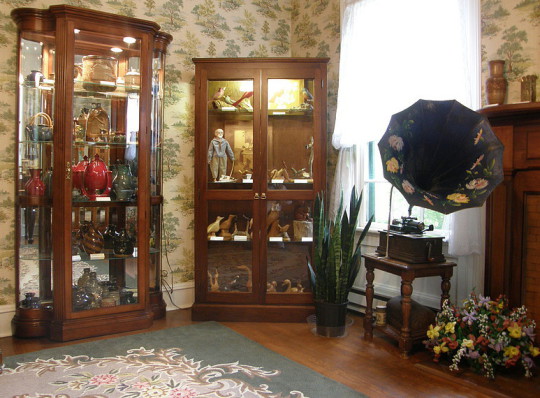 The Museum of North Carolina Handicrafts showcases a wide assortment of folk art made from an equally wide assortment of raw materials.  The collection includes woven baskets, quilts, pottery, wood-carvings, musical instruments, dolls, and the list goes on and on.  The various pieces are exhibited to good effect in the circa 1875 farmhouse of Stephen J. Shelton.  A Civil War veteran, Shelton was a farmer, businessman, and active civic and religious leader.  His son, William, added to the original house and developed a dairy farm on the property.  William also served as the superintendent of the Navajo Indian School in Shiprock, New Mexico for many years, and returned to North Carolina with an extensive collection of Navajo arts and artifacts.  Appropriately, one room of the Museum showcases Shelton’s collection, complimented with crafts and artifacts donated by Cherokee artisans.  The house remained in the Shelton family until 1977, when the property was conveyed to the Museum of North Carolina Handicrafts, which opened to the public in 1980.  A gift shop offers handicrafts by area artists.  Hours and tour times change seasonally.  704-452-1551 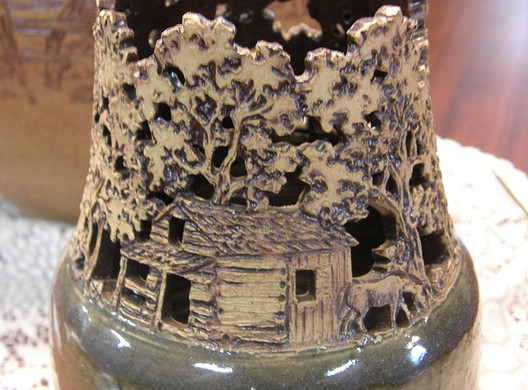 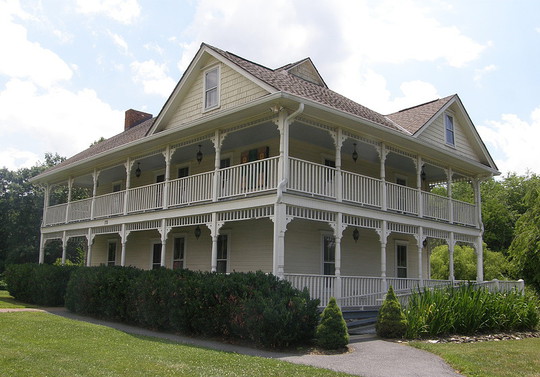 “The Historic Pride of Clyde” is the Shook-Smathers House, considered by Preservation North Carolina to be the oldest frame house west of the Blue Ridge.  The Museum is a wonderful study in architecture.  Unlike many other house museums, this one features little furniture, so the focus is upon its construction and design.  The oldest part of the house was built circa 1800 and its construction reflects the methods and materials of the American frontier.  The large addition and remodeling that took place in the 1890s displays rustic Victorian construction.

The house has a close association with the Methodist Church.  Jacob Shook, the original owner, built a third floor on the original structure which he allowed to be used as a community chapel.  Itinerant preachers held services in the “Upper Room” chapel until churches were built.  Among these was Francis Asbury, a pioneer bishop of American Methodism.  Museum hours are 1-5 Tuesday, Friday, and Saturday from May through September.  Admission charged. 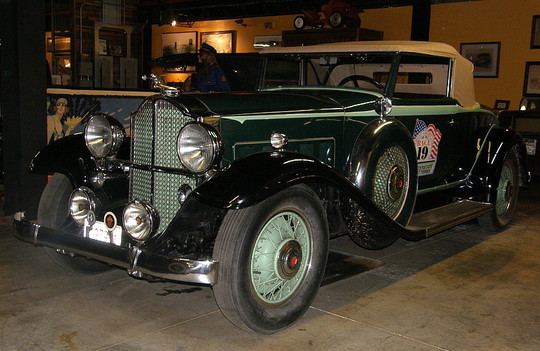 Since its opening in 2002, the Wheels Through Time Museum of Vintage Transportation has given visitors to scenic Maggie Valley the chance to enjoy first-hand the largest private collection of rare American motorcycles in the world. In addition to the more than 250 antique motorcycles on display are representative automobiles from each of America’s ten decades of automotive history, as well as numerous related memorabilia. Museum founder Dale Walksler began his collection of motorcycles and automobiles in the late 1960s at the age of 15. A longtime owner of a Harley-Davidson dealership, Walksler decided to give a home to his extensive collection and invested $2 million to construct a 38,000 square foot building of his own design. He chose Maggie Valley as the site for his museum in part because of its relative proximity to a stretch of highway in western N. C. and eastern Tennessee affectionately known as the “Tail of the Dragon,” considered one of the best motorcycling and sports car roads in the world. 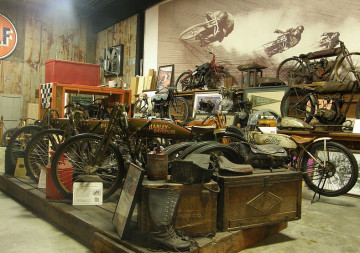 With one exception, all of the motorcycles on display are American made, 28 different makes in all. Walksler considers the “crown jewel” of the collection to be a 1909 Reading Standard board racer, which was found in the basement of the Henry Ford Museum and sold to Walksler at auction. Manufactured in Reading, Pennsylvania, this racing bike attained speeds of 90-100 mph. Competitors would race each other around steeply banked wooden tracks while spectators watched from the rim. There was little regard for anyone’s safety. Board racing was a popular sport in the 1910s and 1920s until numerous fatalities among riders and spectators alike caused the government to ban the sport.   Walksler’s collection includes a number of one-of-a-kind bikes, numerous Harleys and Indian motorcycles, and even one that “starred” in the Jimmy Stewart film Spirit of St. Louis. Filmed from the right, it had the markings of a military bike; seen from the left, it bore the original Harley-Davidson logo. 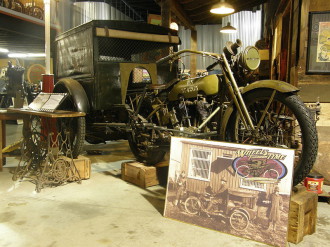 Although cycles far outnumber cars at the museum, the dozen or so automobiles that are on display are all interesting. The collection includes a 1954 tomato red Cadillac Eldorado once owned by the last sheik of Baghdad; a rare Locomobile roadster from 1914; a Packard; a Duesenburg; and several more Cadillacs, including a 1949 Caddy owned by actor Steve McQueen.  There are four motorcycles previously owned by McQueen on display as well.  Although visitors are free to view the collection on their own, admission includes a guided tour that yields a wealth of information about the bikes and cars on exhibit. Enhancing the collection of wheeled vehicles are hundreds of miscellaneous items, highway memorabilia and mementos from days gone by.

The Wheels Through Time Museum is on US 19/23 in the heart of Maggie Valley’s business district. Admission charged. The museum is open daily year round. Hours are 9-6 April-November and 10-5 December-March. Photography permitted. The museum includes a gift shop, and all proceeds from admission and gift shop go back into the development of the museum. 828-926-6266 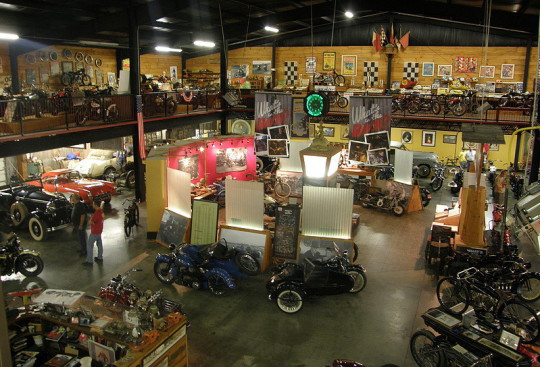