Scroll down this page or click on specific site name to view features on the following Cherokee County attractions/points of interest: 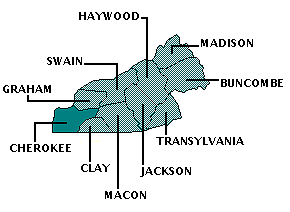 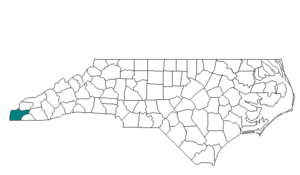 Created in 1839, the county is named for the Cherokee Indian tribe. 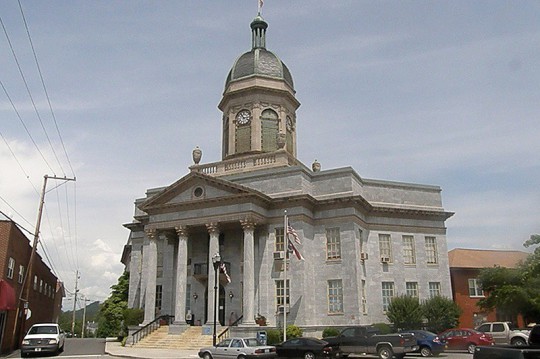 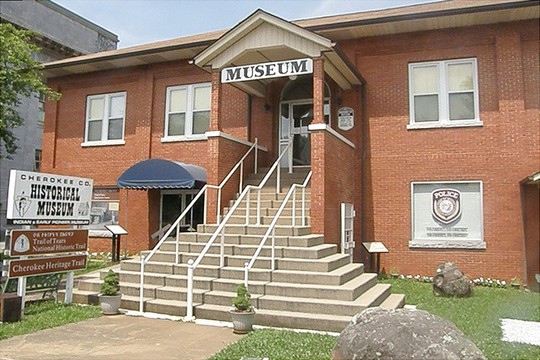 The Cherokee County Historical Museum occupies the old town library, built in 1922, one of many such buildings across the country financed by philanthropist Andrew Carnegie. The Museum has an extensive collection of Native American artifacts, presents a wealth of information about the Trail of Tears, and features exhibits about the region’s early settlement. Visitors will notice the prehistoric soapstone “turtle” that stands on the Museum’s front lawn; of unknown age and origin, the stone is carved to resemble a turtle and is covered with ancient petroglyphs. The Cherokee County Historical Museum is located at 205 Peachtree Street. Hours are 9-5 Monday-Friday. Admission is free.

Fields of the Wood Bible Park 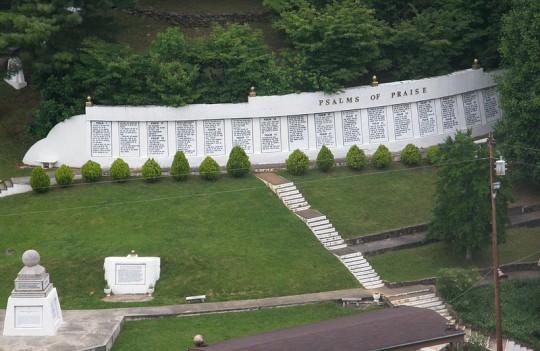 Fields of the Wood Bible Park, eighteen miles west of Murphy and about as far west as you can go in North Carolina without crossing into Tennessee, is an attraction of Biblical proportions – literally. Visitors to the park will see the largest display of the Ten Commandments in the world. They will also see the world’s largest cross, the longest altar, and the biggest version of the New Testament. Located in the heart of the Great Smoky Mountains, Fields of the Wood is promoted as “A Bible Park where God’s Word is displayed amid God’s Creation!” Fields of the Woods had its origins slightly more than a century ago, when Ambrose Jessup Tomlinson and a few followers came to the Great Smoky Mountains of North Carolina intent upon sharing the Gospel with Appalachian residents. Desiring to establish a new church, Tomlinson hiked to the top of a mountain to pray for direction. When he returned to his followers, he told them that God had revealed to him what kind of church it should be. This vision led to the establishment of the Church of God of Prophecy. In 2003, the church listed more than 300,000 members in 86 countries. 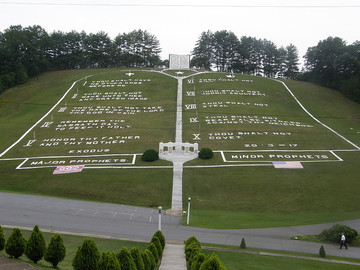 Just as, in the Old Test-ament, Jacob marked the place where he received his vision of a ladder lead-ing from earth to Heaven, Tomlinson decided that his church would mark the place where he had gone to pray for guidance. Accordingly, the church purchased a 210 acre tract of land which included the mountaintop where Tom-linson had prayed. Tomlinson was intent upon creating a holy place and, inspired by a passage from Psalms (132:6), he named it Fields of the Wood. The first project was the creation of the world’s largest rendition of the Ten Commandments. At the time of Tomlinson’s death in 1943, the letters were spelled out in lime. The project was completed two years later, with concrete letters painted in white. The Commandments stretch 300 feet across the side of a mountain, and each letter is 5 feet high. During the summer, a crew of workmen is responsible for cutting grass, repairing chipped letters, and resetting letters that, over time, slide out of position down the hill. At the top of Ten Commandment Mountain is the New Testament Marker, an open Bible 30 feet tall and 50 feet wide. To truly appreciate the size and scope of the Commandments, and to easily read the words, visitors need to climb at least halfway up the 320 steps leading to the top of Prayer Mountain on the opposite side of the valley. 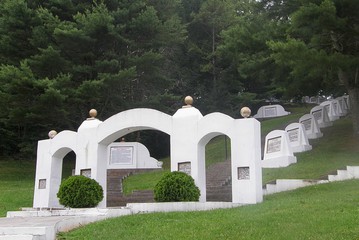 On the way up, visitors can read selected Bible verses and teachings marked in stone. At the top of this mountain is The Place of Prayer, an 80 foot long altar commemorating the place where Tomlinson prayed and received his vision. The Bible Park also includes All Nation’s Cross. This prone structure, at the top of All Nation’s Mountain, is 150 feet long and 115 wide and is the largest cross in the world. It is lined by the flags of the 86 countries in which the Church of God of Prophecy is located. Other points of interest include a replica of Christ’s tomb, Golgotha, the Bethlehem Star, and an outdoor baptismal pool. Fields of the Wood is visited by thousands of visitors annually. To get to the park, drive 7 miles west of Murphy on US 64/74, and then turn west onto NC 294. The park is approximately ten miles on the right. Fields of the Wood is open daily from sunrise to sunset. Admission is free; donations are accepted. The Bible Park also features a prayer chapel, gift shop, book store, snack bar, and picnic area. 828-494-7855

FIELDS OF THE WOOD BIBLE PARK 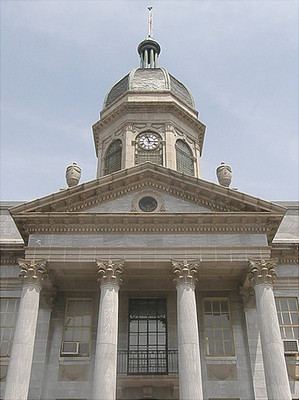 543 miles separate the towns of Manteo in the east and Murphy in the west. Manteo is a well-known tourist destination, home to such attractions as Fort Raleigh, the “Lost Colony” outdoor drama, the Elizabethan Gardens, and many other tourist draws, but what is there to see and do in Murphy?  Visitors may be surprised at all they find.  For one thing, there’s the Cherokee County Historical Museum, a key stop on the Trail of Tears National Historic Trail. Travelers can visit the site of Fort Butler, where thousands of Cherokees were gathered prior to their removal to the Oklahoma Territory. They can view the largest pyramid in the eastern United States, a memorial to an early settler. Or, they may pause at the gravesite of Abram Enloe, whom some believe to be the true father of Abraham Lincoln. For certain, visitors will want to admire the Cherokee County Courthouse, one of the finest public buildings in the state, and take time to walk around Murphy’s quaint downtown area.

Among the grave markers and headstones in the Harshaw Chapel cemetery is a small obelisk marking the plot of Abram Enloe. It’s an involved story, but there are many folks who think that Abraham Lincoln’s mother, Nancy Hanks, was a servant in Enloe’s household in Rutherford County and that Enloe was actually the father of the future president. Enloe did not live in Murphy, but happened to be visiting the town when he died, explaining his burial in the local cemetery.

Nothing of Fort Butler remains to be seen today, save a simple stone monument marking its location, but its place in American history is permanent.  The fort was named for Benjamin F. Butler of New York, who served as Attorney General during the administrations of Presidents Jackson and Van Buren and who was much involved in the Indian removal. When Cherokee County was established in 1839, several Fort Butler buildings were used as county offices until an actual courthouse could be raised. In addition to the marker, picnic tables and a short trail have been installed at the site. 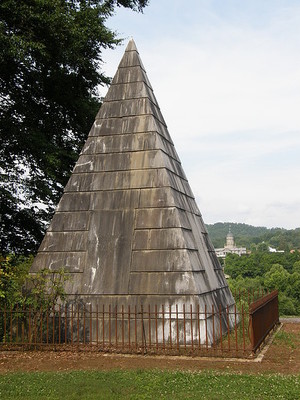 A marble pyramid serves as an unusual memorial to Archibald R. S. Hunter, the first white settler to the area and the proprietor of a trading post. His daughter Martha married Charles Hitchcock, a US Army surgeon serving at Fort Butler. The Hitchcocks had only one child, a girl named Lillie. The family moved to San Francisco in the 1850s, where Lillie met and eventually married wealthy socialite Howard Coit. Although the marriage didn’t last, the two remained friends, and Lillie inherited Coit’s considerable estate when he died. Lillie also ended up inheriting her grandfather’s estate, worth some $60,000, along with extensive land holdings. As a memorial to her grandparents, she arranged for a large marble pyramid to be built. Somewhat out of the way, the pyramid in Murphy is much less famous than is another memorial for which Lillie Coit is responsible – the $100,000 bequest she left to the city of San Francisco was used to build the famous Coit Tower on Telegraph Hill.

A curious note about Murphy: While Cherokee County was named for the Native American tribe that lived in the mountains, the county seat was named for Archibald D. Murphey, an early and effective advocate of public education. Murphey died in 1832, but his efforts bore fruit in 1839 – the same year that Cherokee County was established – when NC’s first public school law was enacted. Unfortunately, thanks to a careless clerk, in the act of the General Assembly which arranged for the conveyance of a 400 acre tract for the establishment of the town, the name was misspelled Murphy, and the error was never corrected. Murphy’s Law at work, perhaps?

Cherokee County is bordered by CLAY, GRAHAM, and MACON counties.