Scroll down this page or click on specific site name to view features on the following Macon County attractions/points of interest: 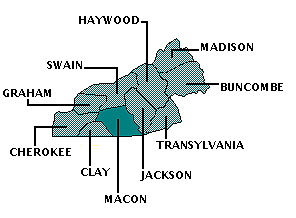 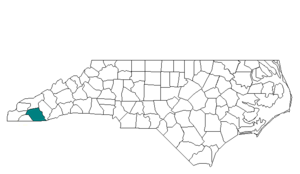 Created in 1828, the county is named for Nathaniel Macon, US Senator and Speaker of the US House of Representatives.

The county seat is Franklin.  Other communities include Burningtown, Cowee, Cullasaja, Ellijay, Gneiss, and Highlands.

It is worth noting that Franklin has a reputation as the “Gem Capitol of the World;” the last surrender of Confederate troops in North Carolina took place in Franklin on May 12, 1865.

Below:  Dynamic Cullasaja Falls along US Highway 64 between Franklin and Highlands 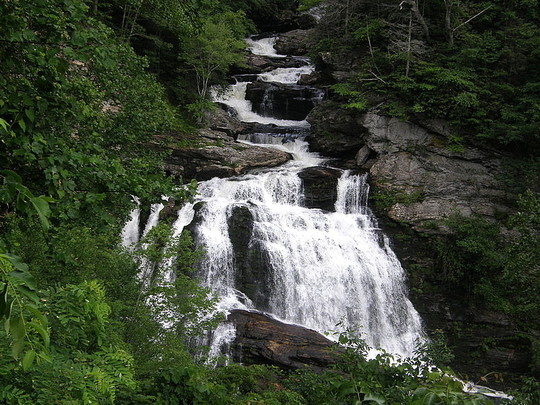 The Town of Franklin, in western North Carolina’s Macon County, bills itself as the “Gem Capital of the World” and the “Ruby City” with good reason – a considerable amount of gem mining in North Carolina takes place around Franklin and the Cowee Valley north and west of town.  No less than ten gem mines in the Franklin area are open to the public, and the town is the site of two major gem shows each year, in May and July. 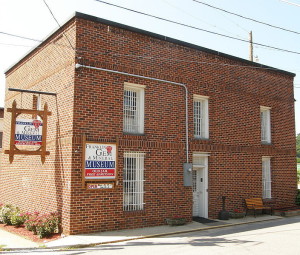 Something’s bound to “arrest” your attention at the Franklin Gem and Mineral Museum, located in the former county jail.  The 30-foot thick brick walls and the steel bars that once held prisoners now make a sturdy home for the huge collection of gems and minerals on display.  Although one entire room showcases only stones found in the Tarheel State, specimens in the collection not only come from local sites, but from around the nation and across the world.  Now in its 56th year, the Ruby City Gem Museum showcases an equally impressive collection of stones, including a 385-pound sapphire and a 162-carat ruby, one of the largest gem-quality rubies ever found in the area. The Franklin Gem & Mineral Museum is open 12-4 Monday through Saturday from May through October, Saturdays only November through March, and closed the month of April.  828-369-7831  The Ruby City Gem Museum is open April 1 through December 26.  828-524-3967  Admission is free to both museums. 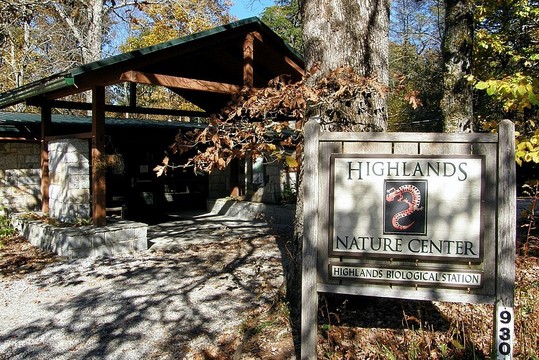 The Highlands Biological Station is a hands-on learning facility that focuses on the biodiversity of the southern Appalachian region. The Station is housed in the Clark Foreman Museum building, constructed between 1939 and 1941 by the Works Progress Association using native granite and chestnut. Exhibits include a variety of live amphibians and reptiles and an even greater assortment of mounted animals and birds. Behind the main building is the Botanical Garden, featuring nearly 500 species of mosses, ferns, shrubs, trees, and wildflowers, viewed from a series of trails and boardwalks winding around and through wetlands and woods. 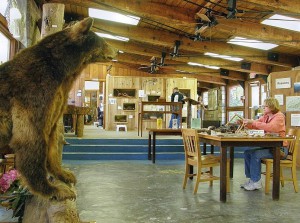 The Gardens are open year-round from sunrise to sunset.  The Station is open May through October.  Special weekday programs are scheduled every day from late May through mid-August.  Night programs are also offered during this time frame, as are guided tours of the Garden every Monday morning at 10:30; a different topic is discussed each week.  Admission is free.  828-526-2623 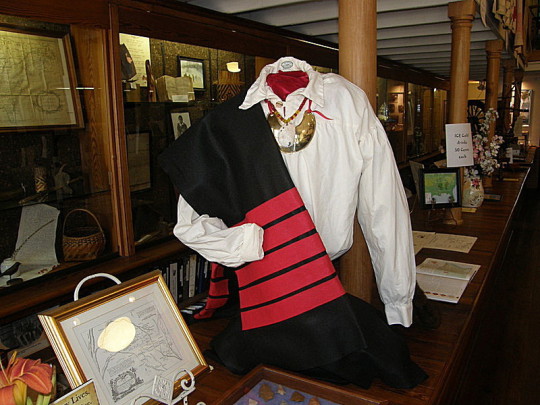 The Macon County Historical Museum exhibits an eclectic mix of items from days gone by.  The Museum’s largest artifact is the building itself.  Formerly a mercantile store, the 1904 J. R. Pendergrass building provides just the right ambiance for the historical exhibits.  Visitors may be surprised to learn that the last surrender of Confederate troops in North Carolina took place in Franklin on May 12, 1865, two weeks after Joseph Johnson’s capitulation at Durham Station.  News of the surrenders at Appomattox and Durham were slow to reach the isolated mountain troops.  When word finally did arrive, Confederate Major Stephen Whitaker surrendered to Union Colonel George W. Kirk outside Dixie Hall (now the site of the Macon County courthouse).  Reenactments of the “last surrender” are staged each year as part of the Franklin Folk Festival, held the third week in July. The Macon County Historical Museum is open 10-4 Monday through Friday year-round.  Admission is free; donations are suggested.  828-524-9758 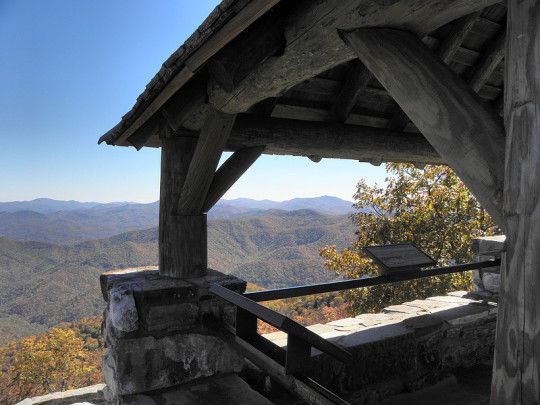 Check the official North Carolina Transportation Map and you’ll see that Wayah Bald is duly noted, a little to the west of Franklin in Macon County.  The map gives its elevation at 5,385 feet, but signage on the mountain’s summit indicates it tops out at a mere 5,342 feet.  This minor discrepancy notwithstanding, Wayah Bald doesn’t garner the attention it deserves, and is overshadowed by places like Mount Mitchell, Clingmans Dome, and Mount Pisgah.  Locals know about it, however, and Wayah Bald has been a popular destination for them for decades.

In pioneer days, the motivating force in climbing a mountain was, in most cases, to get to the other side; in modern times, most people ascend a mountain to enjoy the view, and Wayah Bald will in no way disappoint those who have sightseeing on their minds.  The panoramic views from the summit are delightful year-round, but especially so in mid-June, when the orange, pink, and white azaleas are in bloom, and in mid-October, when fall foliage is at its peak.  Views from the top would be reward enough, but the old stone fire tower is the cherry on the sundae.  The stone edifice was built by the Civilian Conservation Corps in 1937 and was used for a relatively brief period by watchmen who actually lived at the tower for two-month periods.  Despite appearances, the stone tower wasn’t as sturdy as it needed to be – by the mid-1940s, cracks allowed water to seep into the structure.  Fire detection service was stopped in 1945, and the upper levels of the tower were removed two years later for safety reasons.  The tower was such a popular destination, however, that it was eventually repaired and the second floor reopened as an observation deck.  The tower was listed on the National Historic Lookout Register in 2007.

On the road to the summit, check out the buildings at Wilson Lick.  Built in 1916, this was the first ranger station constructed in the newly-formed Nantahala National Forest.  Signage at the parking area shows a photo of Grady Siler, the Forest’s first District Ranger.  He and his wife lived at Wilson Lick from 1917 through 1918.  The nearly 100-year-old station is roughly three miles from the summit and, for those adventurous enough to make the climb on foot rather than drive up by car, the path they will follow to the top is a part of the Appalachian Trail.

For those who might be puzzling over the name, “Wayah” is the Cherokee word for “wolf.”  Red wolves were plentiful in the region until they were eradicated in the mid-1800s.  Wayah Bald is west of Franklin.  From US 64, turn north onto Old Murphy Road/State Road 1442.  Turn left onto Wayah Road/State Road 1310.  Drive 9 miles and turn right onto National Forest Road 69 and continue to the summit. 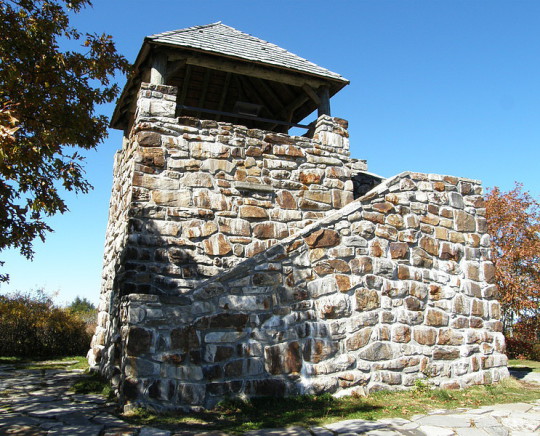