Scroll down this page or click on specific site name to view features on the following Graham County attractions/points of interest: 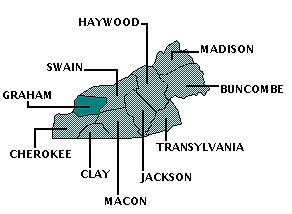 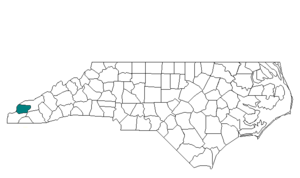 Created in1872, the county is named for William Alexander Graham, a US senator, NC governor, and US Secretary of the Navy.

The county seat is Robbinsville.  Other communities include Cheoah, Fontana Dam, and Santeetlah.

It is worth noting that the Nantahala National Forest covers much of Graham County; Fontana Dam, on the Little Tennessee River, is the highest dam in the Eastern United States. 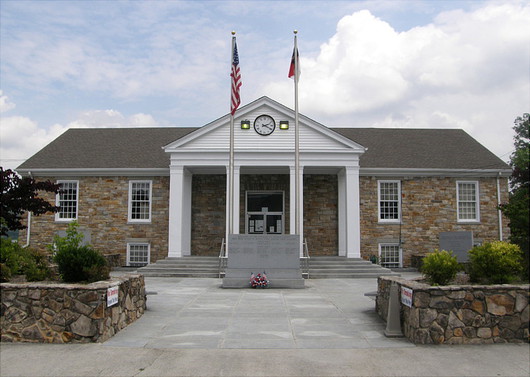 There’s an old saying that goes, “When you come to a fork in the road, take it.” This is excellent advice when you come to a particular fork in the road in the westernmost corner of Graham County. Bear left and you’ll be heading west on the scenic, multi-million dollar Cherohala Skyway towards Tennessee. Bear right and you’ll come to the pristine Joyce Kilmer Memorial Forest. Time permitting, do both, and treat yourself to a relaxing day in the picturesque mountains of western North Carolina.

Cherohala Skyway starts on NC 143 about 12 miles west of Robbinsville and runs to Tellico Plains in southeast Tennessee, offering 36 miles of scenic beauty along the way. Started back in 1962, the Skyway took 34 years to complete and cost $100 million, making it the most expensive roadway in North Carolina. Billed as the “Mile High Legend,” Cherohala offers numerous scenic pull-offs along the way, and there is little evidence of modern civilization to spoil the views. The Skyway’s highest overlook, at 5,390 feet, is the Santeetlah. A short detour off the Skyway on Forest Service Road 210 will bring you to a view of the Bald Rivers Falls, a 100-foot cascade which can be seen without even leaving the car!  Weather in the mountains, of course, is always unpredictable, so the Skyway is sometimes cloudy, sometimes foggy, sometimes cold, but always worthwhile.  Except for a couple of rest areas, there are no conveniences along the Skyway, so make sure you have plenty of gas before starting your adventure. And for those of you who have been wondering, the Skyway takes its name from the two national forests through which it passes – Cherokee and Nantahala – thus forming the word “Chero . . . hala.” 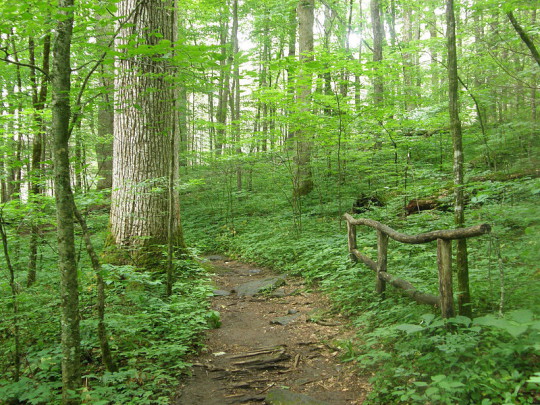 The Joyce Kilmer Memorial Forest, when visited in summer, will bring words like “lush,” “dense,” and “green” quickly to mind. Seen in winter, “rugged,” and “skeletal” are more likely the adjectives that would best describe the landscape. Regardless of the season, words like “primeval,” “majestic,” and “lonely” always seem appropriate. In the mid-1930s, the US Forest Service established the Joyce Kilmer Memorial Forest as a tribute to the writer whose poem “Trees” inspired millions. The Forest includes 3,800 acres of virgin wilderness, an area that had once been hunting grounds for the Cherokee Indians. Found in this protected setting are towering poplars, red oaks, and hemlocks. Many are hundreds of years old. Some 100 feet tall, and others are 20 feet or more around the base. 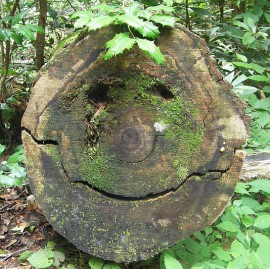 Although there are more than 60 miles of hiking trails in the larger 14,000-acre Joyce Kilmer-Slickrock Wilderness area, the main nature trail through the forest itself is a relatively easy, 2-mile, figure-8 loop that is ideal for novices or families with children.  It takes about 90 minutes to do the walk.   Picnic tables and flush toilets are located near the parking lot and trailhead.  From the parking lot, a wooden footbridge crosses over Little Santeetlah Creek and the trail begins its slow ascent up the hillside, passing a variety of vines, ferns, shrubs, and mosses.  In the spring, the landscape reveals rhododendrons or the occasional wildflower in bloom.  At roughly the half-way point, the trail intersects itself.  The upper loop encircles Poplar Grove, a section of woods containing many of the oldest and tallest trees in the forest. 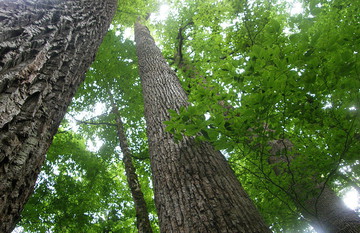 At the intersection of the trail visitors will see a small bronze plaque with a short biography of Joyce Kilmer mounted to a rock, a simple tribute to the man in whose memory the forest is named.  An infan-tryman during the First World War, Kilmer was killed in action in France July 30, 1918.  To get to the parking area, take NC 143 west from Robbinsville for five miles.  At the stop sign, turn right and drive seven miles on Kilmer Road to arrive at the top of Santeetlah Gap and the junction with the Cherohala Skyway.  Turn right. 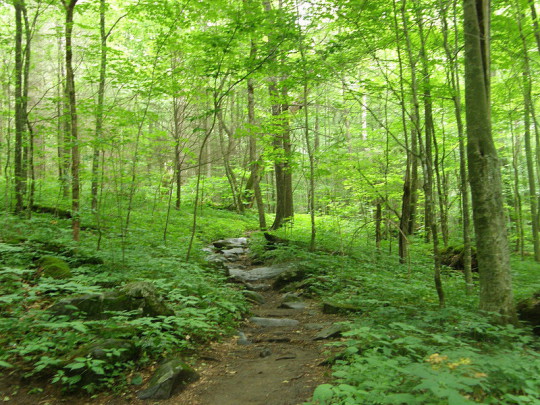 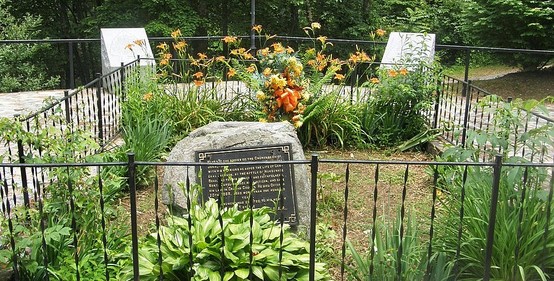 The Junaluska Memorial Site, Museum, and Medicine Trail honor Chief Junaluska, a skilled warrior and distinguished leader of the Cherokee.  Despite his service in the US Army and his efforts to maintain peaceful relationships between his people and the state and federal governments, Junaluska was among several thousand Cherokee who were rounded up and forced to walk the “Trail of Tears” to Oklahoma in 1838.  He returned to North Carolina in 1840 and lived the remainder of his life in Cheoah Valley.  When he died in 1858, his grave was marked with a pile of stones.  In 1910, the Daughters of the American Revolution replaced the stones with a large rock plaque; in 1997, the current memorial was constructed.  Surrounding the gravesite is a seven-sided foundation with seven granite monuments.  Each monument represents one of the Cherokee clans and tells about the life and achievements of Junaluska.  The Museum provides more details about his life and times.  The ¼-mile Medicine Trail features plants and shrubs used in the making of traditional medicines.  Hours are 9-5 Monday through Saturday (hours may vary from November through March).  Admission is free.  828-479-4727 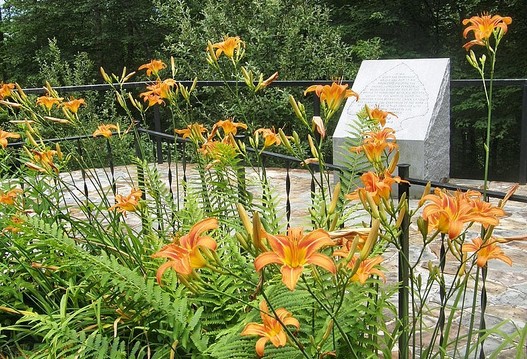 "Tail of the Dragon"

It’s not often that the road is the destination, but such is the case with a short stretch of US highway 129 weaving its way from northwestern North Carolina into northeastern Tennessee. Nicknamed “The Tail of the Dragon,” this 11-mile ribbon of asphalt is considered one of the best motorcycling and sports car roads in the world.  To drive the length of the Dragon’s Tail takes about 25 minutes. The starting point is Cheoah Dam near the Graham-Swain county line.

US highway 129 zigzags its way along the southern border of the Great Smoky Mountains National Park between Chilhowie Lake in Tennessee and Cheoah Dam in North Carolina. The aptly named “Tail of the Dragon” has 318 curves in eleven miles, making it a fun, challenging road course. In North Carolina, one begins to ride The Dragon at Fugitive Bridge, just below Cheoah Dam. The spot gets its name because this was the location for the scene in the movie The Fugitive, starring Harrison Ford, where the title character takes a dive to avoid capture. Many points along the route have been given memorable names. The junction with NC highway 28 is called “The Crossroads of Time.” Especially harrowing curves have earned such sobriquets as “Copperhead Corner,” “Wheelie Hell,” “Parson’s Curve,” “Horns of the Dragon,” and  “The Hump aka Gravity Cavity.” One of the rare straight stretches, nicknamed the “Pearly Gates,” comes just before the Dragon’s tail ends at Tabcat Bridge at Chilhowie Lake.

In June, 2003, Tennessee Speaker of the Senate John S. Wilder and 4th District Senator Michael R. Williams gave special recognition to The Dragon with a proclamation which read, in part: “Whereas, on occasion, an entity transcends reality to become a legend in its own time . . . we honor with great reverence the eleven miles of U. S. 129, with its sometimes death-defying 318 twists and turns that is affectionately known to its travelers as ‘The Dragon.’ We bid a safe ride to those who dare venture down The Dragon’s path.”

Although a U. S. highway, signs are posted to dissuade truckers from using this portion of route 129. With an eye toward safety, drivers are repeatedly cautioned to avoid crossing the center line. Any counting of curves should be left to passengers, who have nothing else to do but hang on for dear life anyway. Drivers will need to stay focused on the road ahead of them. With the exception of the Tail of the Dragon overlook, from which Calderwood Dam can be seen in the distance, there are no pull-offs or viewing areas. Souvenir T-shirts, bumper stickers, key chains, and the like can be purchased at Tapoco Lodge, just beyond Fugitive’s Bridge.

"TAIL OF THE DRAGON"

Graham County is bordered by CHEROKEE, MACON, and SWAIN counties.