Scroll down this page or click on site name to view the feature on the following Davie County attraction/point of interest: 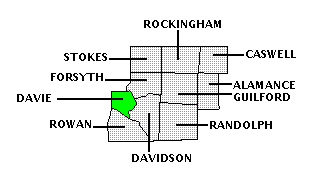 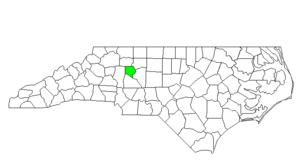 Created in 1836, the county is named for William R. Davie, Revolutionary War patriot, proponent of Federal Constitution, “father of the University of North Carolina, and state governor. 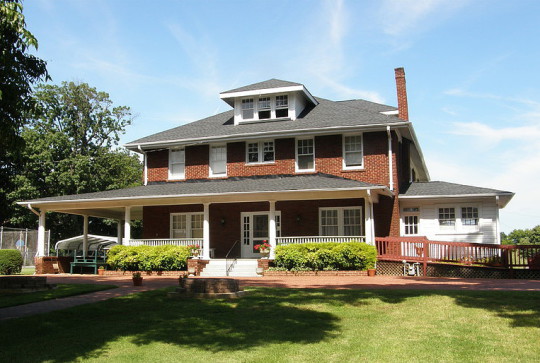 At the Mill Village Museum in Cooleemee, the emphasis is more on the village than the mill. Yes, you’ll get a look at how cotton mills operated and how the raw material was made into fabric, but the real focus is on the people – lifestyles of the not so rich and famous. If you’re among those who think textile workers begrudged their working and living conditions, you might feel differently after a visit to the Museum.

The Mill Village Museum occupies the 1924 Zachery-Holt House.  James Walter Zachery was the general manager for Erwin Mills, successor to the original Cooleemee Cotton Mills. Like the mill hands he man-aged, Zachery rented his house from the company. The mill was built in Cooleemee in 1898, soon after the railroad line between Winston and Charlotte was completed.  The company bought nearly 3,400 acres straddling both sides of the South Yadkin River above and below Cooleemee Falls, a ready source of power.  The new mill soon drew workers off the farms and into the town. The company provided modest rental homes, and wages were comparatively good.  Though workers faced 12-hour shifts weekdays and a 6-hour shift on Saturday, labor conditions weren’t as bad as is commonly thought.  In the industry’s early days, slower machines meant that workers frequently had time during the day in which to relax.  It wasn’t until the 1930s that faster machines, time efficiency studies, and productivity measurements began to put greater demands upon the average worker.

The Museum’s charm is in its attention to details.  Area residents donated most of the artifacts on display.  In portraying the life of the mill community, small things matter, like the handful of ticket stubs to the old Cooleemee Theatre.  Originally a venue for silent films, it was only the second movie house in the state to feature “talkies.”  Most mill towns fielded their own baseball teams, and Cooleemee had the Cools.  Roy Alexander was among a half-dozen of the team’s players to actually make it to the majors, and the Museum features a photo of Alexander with fellow Boston Braves teammate Babe Ruth.  Another Cooleemee player who made it with the Braves was Buck Jordan, the only player ever to pinch-hit for the Babe.  A photo of Jordan shows him being interviewed by a youthful radio sportscaster named Ronald Reagan.  Newspaper articles and photos tell about the much-loved Dr. A. B. Byerly, the first doctor in Davie County to make house calls by automobile.  Archival photographs are all that remain of Cooleemee Square, the village’s original business district.  The buildings were constructed and owned by the mill and rented to shopkeepers.    When Burlington Industries bought Erwin Mills in 1963, however, the buildings were soon torn down.  In 1969, Burlington closed the Cooleemee factory altogether. 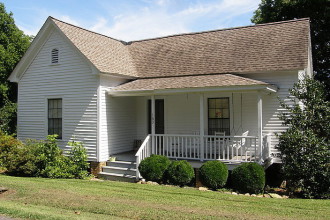 A multi-faceted master plan calls for the current Mill Village Museum to be but one part of a larger Textile Heritage Center at Cooleemee devoted to telling the story of the Southern cotton mill workers and their culture.  A former mill house has been relocated to the end of Church Street and local residents have donated period appropriate furnishings and household items.  The refurbished house is now the Mill Family Life Museum, offering a representative view of a typical mill worker’s home.  From Mocksville, take US 601 South to NC 801.  Turn left on NC 801 into Cooleemee.  Turn right on Marginal Street and left on Church.  The Museum is on the left.  Museum hours are 10-4 Wednesday-Saturday.  Admission is free.  Tours are self-guided; circumstances permitting, a staff member will accompany you through the exhibit area and point out particular items of interest.  336-284-6040