Scroll down this page on click on specific site name to view features on the following Johnston County attractions/points of interest: 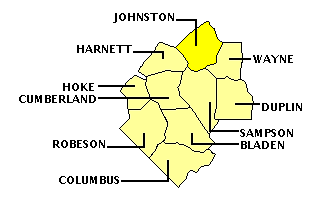 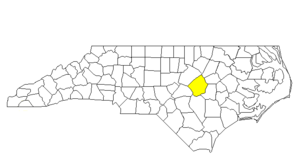 Created in 1746, the county is named for Gabriel Johnston, a Royal Governor of colonial North Carolina.

The county seat is Smithfield.  Other communities include Benson, Clayton, Four Oaks, Kenly, Princeton, and Selma.

It is worth noting that the Battle of Bentonville, the largest land battle in North Carolina during the American Civil War, took place March 19-21, 1865. 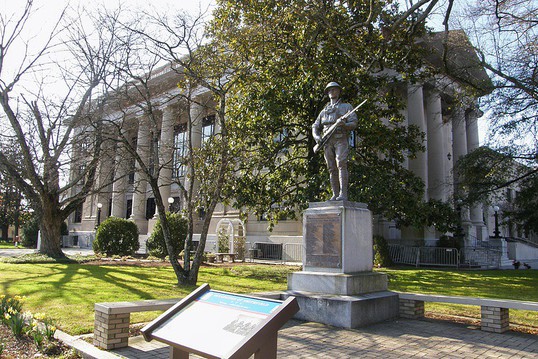 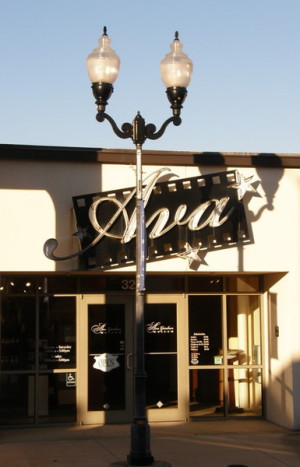 The Ava Gardner Museum honors the hometown girl who became one of Hollywood's most popular actresses beginning in the late 1940s.  The dimple-faced girl, born and raised in Grabtown, a small community seven miles east of Smithfield, NC, journeyed to Hollywood in 1941 with visions of making it big on the silver screen. Her first genuine film role was as Betty in 1943’s Ghosts on the Loose, opposite Bela Lugosi and the East Side Kids’ Huntz Hall and Leo Gorcey. Had this been the high point of her career, it’s unlikely that there would be a home town museum today dedicated to her memory. As it happened, however, Ava Gardner rose above this Monogram programmer to become one of Tinsel Town’s most glamorous leading ladies, and the museum is filled with memorabilia from her stellar career.

Ava Lavinia Gardner was born on Christmas Eve, 1922, to a poor, working class family living in a rural area known as Grabtown, a community comprised of only a few tenant houses and a church. The youngest of five children, Ava was known as an energetic “tomboy.” The family lived in Virginia for a while during Ava’s adolescence before returning to North Carolina. After graduating from Rock Ridge High School in 1939, Ava briefly attended Atlantic Christian College in Wilson. It was while she was vacationing with her sister Beatrice in New York City that a lucky break landed her a contract with MGM studios. Beatrice’s husband, Larry Tarr, was a professional photographer, and he took a number of portrait photos of his beautiful sister-in-law. He placed one of the portraits in the window of his photo shop on 5th Avenue. It was noticed by someone associated with the Hollywood studio, and this ultimately led to a screen test with an MGM talent scout. Ava’s thick Southern drawl notwithstanding, the photogenic 18-year-old was signed to a seven-year, $50-a-week contract. Initially, she did little more than pose for swimsuit photos. “I don’t know how many swimsuits I wore out,” Ava later recalled, “without getting near the water. I shot enough sultry looks around the [photo] gallery to melt the North Pole.” 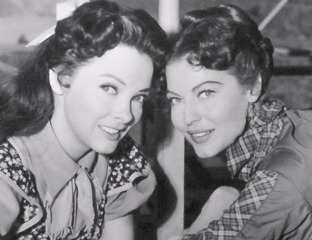 Her breakthrough role came in 1946’s highly-acclaimed The Killers, based on a story by Ernest Heming-way and co-starring newcomer Burt Lancaster. In this film, and other film noir vehicles (1946’s Whistle Stop and 1949’s The Bribe), Gardner epitomized the sultry, seductive femme fatale. Over time, Ava played opposite many of Hollywood’s favorite leading men, including Clark Gable, Humphrey Bogart, Robert Taylor, Gregory Peck, Tyrone Power, and Richard Burton. Although it was for her role in Mogambo that Gardner received her only Oscar nomination, one of her best-remembered roles is that of Julie Laverne in 1951’s ground-breaking musical Showboat, co-starring another North Carolina native, Kathrine Grayson. 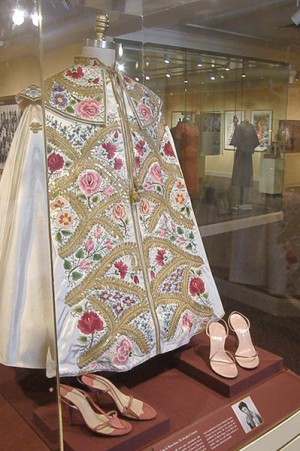 Ava’s real-life leading men included Mickey Rooney, MGM’s most popular star at the time of their marriage, and who fell in love with Gardner at first sight.   The two were married in 1942, after a short courtship, but the union lasted only one year. Another year-long marriage, this time to bandleader Artie Shaw, followed. Her third and final marriage was to Frank Sinatra. This tempestuous marriage lasted six years, ending in 1957, but the two remained close friends until her death in 1990.  In addition to a 15-minute film about Ava’s life and career, the museum displays a collection of original movie posters, outfits from several movies, photos from public and private life, miscellaneous items related to her career, and a small number of personal items.  Gardner desired to be buried near her parents and siblings in Smithfield, and her gravesite is easy to find at nearby Sunset Memorial Park.  The cemetery is located near the west end of Smithfield's downtown area. Signs at the cemetery direct visitors to Ava's gravesite. Museum hours are 9-5 Monday through Saturday and 2-5 Sunday. Admission charged. 919-934-5830 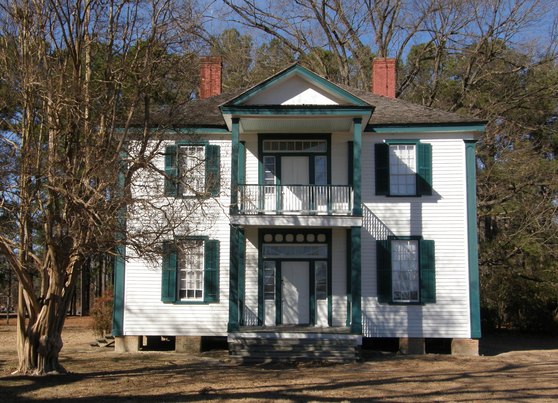 Bentonville Battlefield State Historic Site preserves a portion of the field where, in the closing months of the American Civil War, Federal and Confederate soldiers engaged in fierce conflict.  The three-day action at Bentonville in March 1865 was among the last major battles of the war and was the largest land battle fought on North Carolina soil.

Although the battle of Bentonville was fought very near the end of the bitter, four-year struggle between the North and the South, it was nonetheless fiercely contested and proved costly to both sides. Veterans of such battles as Shiloh, Stones River, and Chickamauga later recalled that the fighting at Bentonville was as fierce as any they had previously experienced. Confederate General Joseph E. Johnston’s patchwork command of 20,000 men faced the daunting task of attempting to halt the advance of two Federal armies.

Under the command of Brigadier General John Schofield, one Union army was moving northwest from Kinston towards Goldsboro. Another, even larger, force commanded by General William T. Sherman was advancing northeast from Fayetteville and likewise moving towards Goldsboro. Sherman’s troops were divided into two wings of equal strength, the left under Major General Henry W. Slocum, the right under Brigadier General Oliver Howard. The division of Union forces gave Johnston’s Confederates a brief opportunity to attack Sherman’s left wing and slow the Federal advance through North Carolina.

On the morning of March 19, 1865, Confederate soldiers entrenched along the Goldsboro Road successfully delayed the approaching Federals. The rebels then began a flanking movement, and the attack initially succeeded in turning the Union left. The Confederates had the better of the fight for much of the day, but by late afternoon, the superior numbers and stubborn resistance of Federal troops prevailed. While the majority of the fighting took place on the 19th, skirmishing continued on the 20th, and a sharp battle ensued on the 21st until Federal reinforcements necessitated a Confederate withdrawal. Over the three days of action, Rebel casualties numbered over 2,600, while Union killed and wounded totaled more than 1,500. 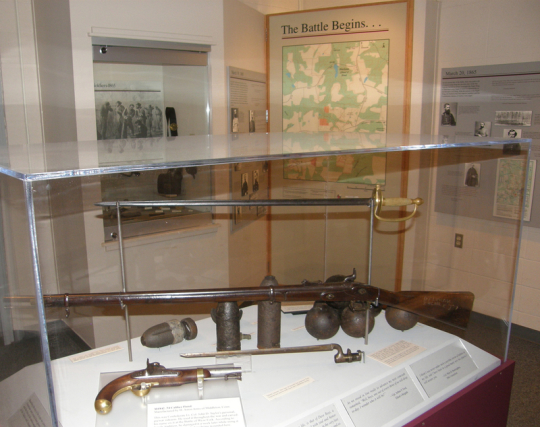 A visitor center features a collection of weapons and artifacts pertaining to the battle, a fiber-optic map explaining the logistics of the battle, and a 10-minute video placing the battle into its historic perspective. Near the visitor center is the Harper House, a two-story farmhouse used by the Federals as a field hospital during the battle.   Tours of the house include an interpretive program on Civil War medicine. The site also includes a reconstructed kitchen and slave quarters, the Confederate Cemetery, monuments, and original earthworks. A driving map is available for those interested in a more extensive tour of the battlefield. 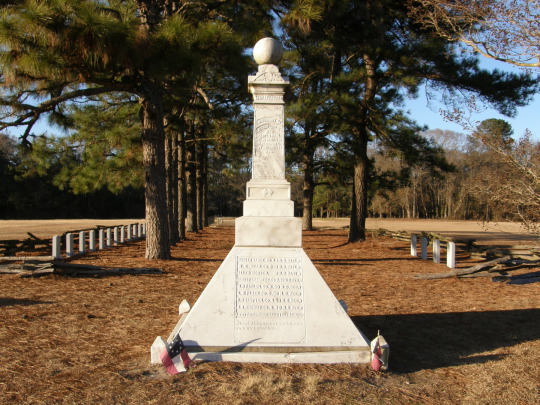 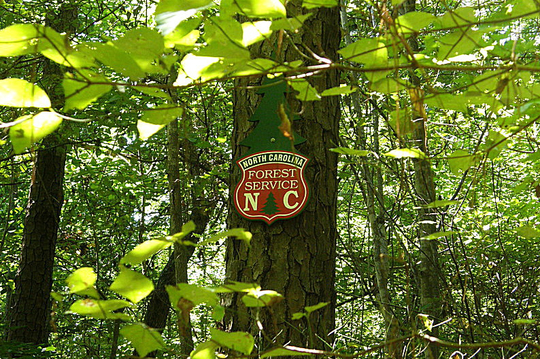 Clemmons Educational State Forest, which opened in 1976, has the distinction of being the first of six such forests in North Carolina.  These managed forests are essentially outdoor class-rooms, teaching visitors about the complex ecosystems which comprise a forest and intended to help them gain a better understanding and appreciation of forests.  One means of educating the public is the child-oriented Talking Tree Trail; selected trees have recorded messages available for play.  The trees speak in the “first person,” and tell visitors about themselves, their surroundings, and the general history about the forest itself.  Aimed at kids, it’s educational for adults as well. 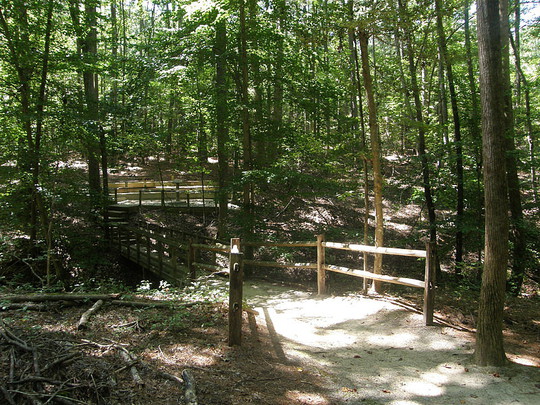