Scroll down this page or click on specific site name to view features on the following Robeson County attractions/points of interest: 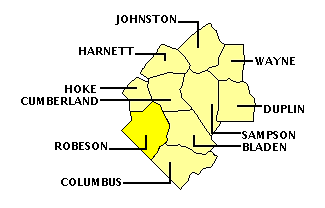 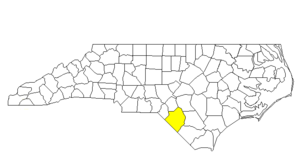 Created in 1787, the county is named for Revolutionary War Colonel Thomas Robeson.

The county seat is Lumberton, named after the Lumber River.  Other communities include Fairmont, Maxton, Pembroke, and St. Pauls.

It is worth noting that many members of the Native American Lumbee Indian tribe live in Robeson County. 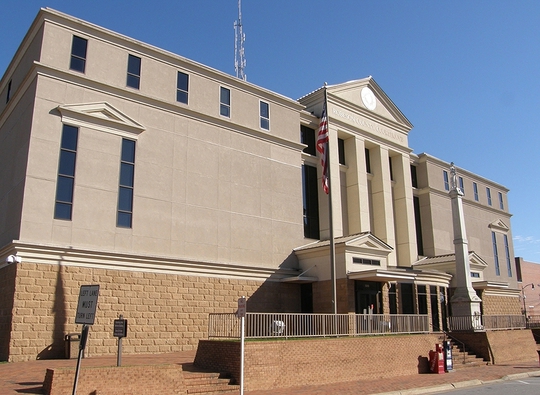 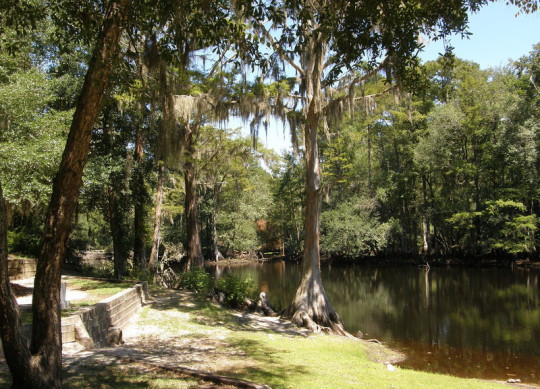 Lumber River State Park in the south-central section of the state gives visitors the opportunity to see North Carolina the way it looked to pioneer settlers more than 200 years ago. The Lumber River is the only black-water river in the state of North Carolina to receive federal designation as a national wild and scenic river. The upper portion of the river was designated as the state’s first recreational water trail as early as 1978. In 1989, the General Assembly established the park and designated the Lumber River as a natural and scenic river. The park has nearly doubled in size since its creation and today encompasses nearly 8,000 acres of scenic wonder along a 115-mile stretch of the Lumber River. In so doing, the park ribbons through the North Carolina counties of Scotland, Hoke, Robeson, and Columbus. The river’s headwaters are in the counties of Moore, Montgomery, and Scotland, where the waterway is known as Drowning Creek. At the Hoke-Scotland county line, it becomes the Lumber River. The waterway owes its name to the vast harvesting of timber that was done in the area during the late 1700s, and it was the lumber industry that initiated early settlement in the region. The river continues to its confluence with the Little Pee Dee River shortly after crossing into South Carolina. 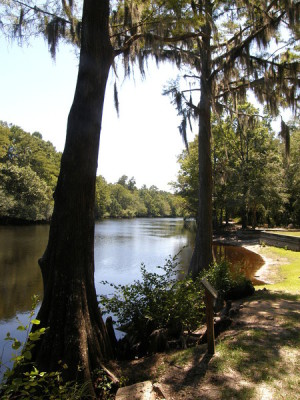 The park is divided into three parts. The upper section, largely undeveloped, is ac-cessible by only a few roads. The lower portion is even more primitive and remote and can be accessed only by footpaths. The central portion is designated the park’s recre-ational area and naturally attracts the most visitors. The Princess Ann area takes its name from the settlement that once stood here, nestled along a high bluff that offered early settlers protection from flooding. Founded in 1796, it was only the second town chartered in Robeson County. Sadly, nothing of the town remains today. In its place are modern facilities that cater to visitors: picnic shelters, grills, rest rooms, primitive campsites, hiking trails, a half-mile nature trail, and a boat ramp. A walking trail from the main parking area leads to an observation deck overlooking a reverse flow area named Griffin’s Whirl. This vantage point offers picturesque vistas both upriver and down.

Visitors to a preserved area designated “wild” and “scenic” will naturally anticipate seeing a wide variety of plant, animal, and aquatic life, and Lumber River State Park won’t disappoint. Massive oaks, bald cypress, river birch and water elm shade the riverbanks in summer; in winter, leafless limbs are draped with veils of Spanish moss. Wildflowers include swamp mallow, spider lily, native wisteria, and wild azalea. Blue heron, kingfisher, sandpipers, and owls are among the feathered inhabitants found in the park, while sharp-eyed visitors drifting along the tranquil waterway by canoe might spot an occasional beaver, river otter, or deer. Fishing enthusiasts can likely expect to reel in catfish, black crappie, or largemouth bass. Head east on U. S. 74. Approximately ten miles east of Lumberton, turn of US 74 onto State Road 2225 south. Turn left on State Road 2246 and continue two miles. The park entrance is on the left. The park is open daily except Christmas. Although the park opens at 8:00 AM year-round, closing hours vary with the season. Park office hours are 8-5 weekdays, except state holidays. Programs are conducted periodically that focus on the historical significance of the river, plant and animal identification, natural sciences, and uses of natural resources. 910-628-9844 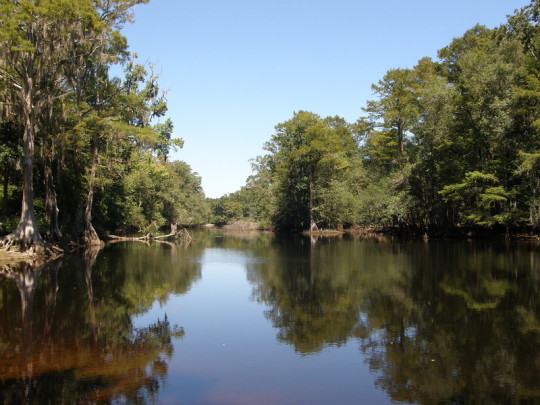 The Museum of the Native American Resource Center on the campus of UNC-Pembroke focuses on the history, art, and culture of Indian people throughout North America, with a special emphasis on the Lumbee Indians of Robeson and neighboring counties.

The University of North Carolina at Pembroke began as the Croatan Indian Normal School in 1887, two years after the N. C. General Assembly recognized the Indians of Robeson County as Croatan and established a separate school system.   For more than half a century, the school’s student population was exclusively Native American; today, UNC-Pembroke boasts a multi-ethnic student body of several thousand. The institution still remembers its roots, however, and gives focus to the culture, history, art, and contemporary issues of Native Americans through the American Indian Studies Department and the Museum/Resource Center.

Since most members of the Lumbee tribe live in Robeson and neighboring counties, much of what the Museum showcases naturally gravitates toward regional topics. Surprisingly, except for several large paintings depicting Henry and Rhoda Lowrie, there’s not much in the Museum specific to the famed “Lowrie gang” that operated in the area in the years following the Civil War.   What visitors will find are two display cases filled with information about an altercation between Indians and members of the Ku Klux Klan on the night of January 18, 1958. A planned gathering of the KKK near the Robeson County town of Maxton raised the ire of hundreds of Lumbee Indians, who disrupted the meeting before it ever got started. While the only real casualties were a few pieces of sound equipment and a light bulb, the incident drew lots of media coverage, including two articles in Life magazine. “The Night the KKK Died” sounds somewhat melodramatic, but the events of this January evening nearly five decades ago nevertheless impacted ethnic relations in the region for years to follow.

Artifacts on display include a variety of arrowheads and tools ranging from the first century to the 1600s. The Museum also displays the oldest canoe yet to be found in North Carolina. Pulled from the Lumber River in 1985, the 16-foot long, 18-½ inch wide canoe is made of yellow pine, and carbon dating has proven this artifact to be over 1,025 years old! Of considerably more recent construction is the desk used by Robeson County native Angus W. McLean during his term as N. C. governor, 1925-29. The most prominent display in the museum is a replica of a one-room cabin, typical of many area homes during the mid-1800s.

Videos with self-descriptive titles can be viewed in the auditorium, among them “Indian by Birth: The Lumbee Dialect,” “Lumbee by Grace: Landmarks in Lumbee Identity,” and “Lumbee: People of the Dark Water.” The latter draws some interesting contrasts between the Lumbees and the Cherokees of Western North Carolina. Numbering between 50 and 60 thousand, the Lumbees are the largest tribe east of the Mississippi. Efforts to achieve federal recognition, and the benefits that come with it, began in 1888, and the efforts still continue 120 years later. If the U. S. government has had difficulty in recognizing the tribe, however, the Lumbees themselves have had no such problem. As one individual is heard saying on one of the videos, “We know who we are, we have always known who we are.” The Museum of the Native American Resource Center aims to keep it that way. The UNC-Pembroke campus is on NC 711 in Pembroke. The Museum is located in Old Main, the first brick structure on campus (1923) and a building listed on the National Register of Historic Places. Regular hours are 8-5 Monday-Saturday. Admission is free. Tours are conducted upon request. 910-521-6282

The Robeson County History Museum is housed in the former Southern Express Building along the banks of the Lumber River in Lumberton.  Exhibits pertain to the county’s natural resources and its agricultural, commercial, military, social, and cultural history.  Admission is free.  Currently, the Museum is open by appointment only.  Call 910-738-7979 to schedule a time.