Scroll down this page or click on specific site name to view features on the following Bladen County attractions/points of interest: 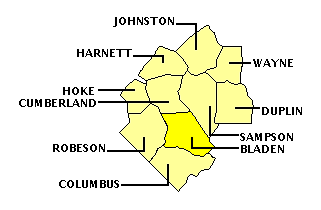 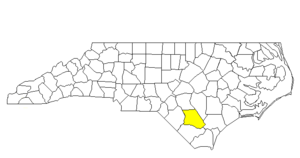 Created in 1734, the county is named for Martin Bladen, English commissioner of trade and plantations.

The county seat is Elizabethtown, named either for Queen Elizabeth I or for the “sweetheart” of Isaac Jones, who owned the land on which the town was built.  Other communities include Bladensboro, Clarkton, Dublin, East Arcadia, Tar Heel, and White Lake.

It is worth noting that Bladen is known as the “Mother of Counties” because all or part of 55 of the state's 100 counties were formed from land which once been part of Bladen County.

Below:  The Black River, which runs along a portion of the Bladen=Pender county line, is home to centuries-old cypress trees. 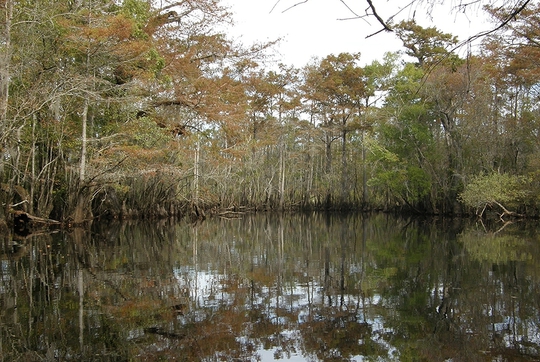 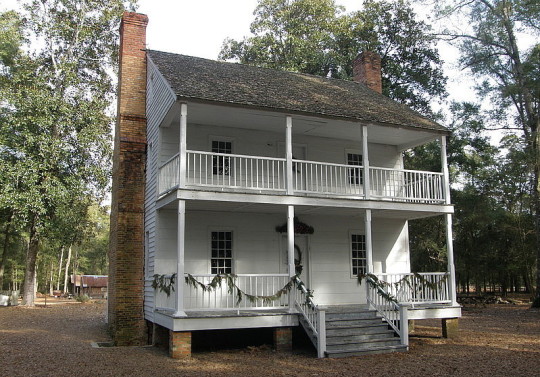 Harmony Hall is a circa 1768 two-story frame plantation house built by James A. Richardson, who later served as an officer during the Revolutionary War.  The house features porches on both sides of the house.  The first floor follows a typical hall-and-parlor plan; an exterior stair provides the only means of access to the second story.  Several buildings have been moved to the site, giving it the feel of a “village of yesteryear.”  Among these relocated buildings is the circa 1914 Suggs General Store (now used as the visitor center and museum), the Shaw-McMillan House, dating to 1784 (now interpreted as a kitchen), the Brisson-Guyton log home, the Wanda Campbell cottage, and the Gate house.  Volunteers in period attire provide tours of the main house and grounds from 10-2 on Saturdays and 2-4 on Sundays.  910-866-4844 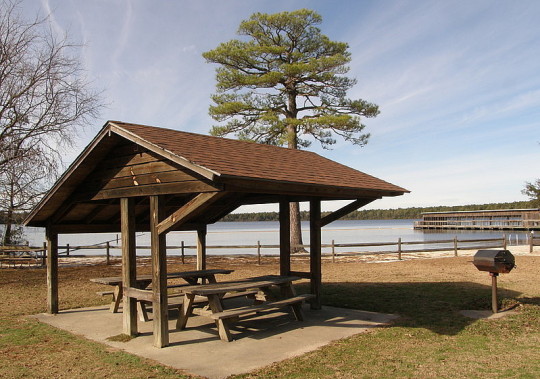 Jones Lake has a shoreline of 2.2 miles and a maximum depth of only 8.7 feet. The tea-colored water, though dark, is clear and free of sediment. A small, sandy beach is ideal for sunbathing and the shallow water is perfect for swimming.  A concession stand, bathhouse, and pier are located near the swimming area. A fee is charged for swimming Memorial Day through Labor Day. Canoes and paddleboats can be rented at the boathouse during this same period. Camping, hiking, fishing, and picnicking are also popular pastimes at the park. Campgrounds are open mid-March through November. The lake was named for Isaac Jones, who donated a tract of land for the establishment of nearby Elizabethtown in 1773. In the summer of 1939, Jones Lake had the distinction of being the first state park opened exclusively for black citizens.

In addition to Jones Lake, the 2,208-acre park also includes Salters Lake. This is an undeveloped lake, and permission to use the lake must be obtained from the park staff. The state park is off NC 242 north of Elizabethtown. It is within the boundaries of Bladen Lakes State Forest, and Turnbull Creek Educational State Forest is close by. Jones Lake opens 8 AM year-round; closing hours vary seasonally. Closed Christmas Day. Admission is free. 910-588-4550 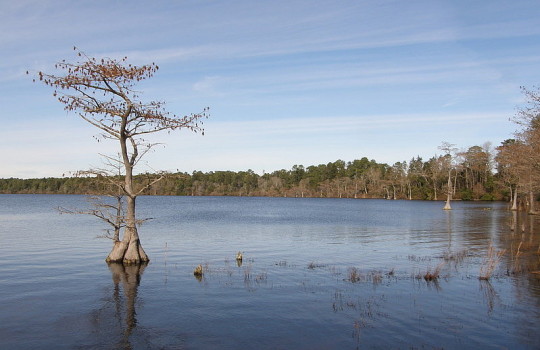 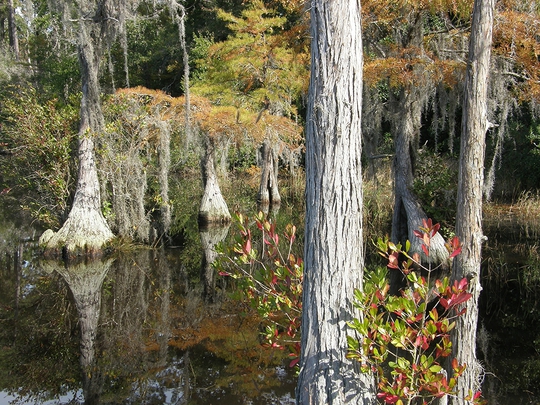 Singletary Lake is one of North Carolina’s nine bay lakes – called such because of the loblolly, sweet, and swamp bay trees commonly associated with them.  Seven are located in Bladen County, and an age-old mystery is connected to them. Exactly what geological event formed these Carolina Bays? Several diverse theories have emerged, and all have their advocates. Some think the lakes were formed by meteors; others argue artesian springs; still others advance sink holes, prehistoric spawning grounds, or an “oriented lakes” theory as probable origins. Just as there is disagreement as to how the lakes were formed, there is equal uncertainty as to the age of the lakes. Some believe they date back 250,000 years, others think they were formed as recently as 10,000 years ago. What everyone can agree upon, however, is that Singletary Lake State Park provides visitors with a variety of outdoor activities, especially during the summer months. 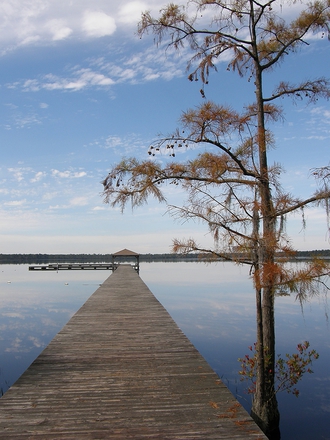 Singletary Lake, named for early resident and landowner Richard Singletary, could easily be renamed "Solitary Lake" during the colder months. Off-season visitors will likely find themselves alone with nature at this secluded spot. During the summer, however, the park buzzes with activity. Catering to clubs and organizations, the park provides two group camps to non-profit organizations. Both camps include a mess hall and bathhouse. Activities include swimming, boating, fishing, and two easy hiking trails. The park includes 649 acres of land and the 572-acre natural lake. Singletary Lake State Park had its origins in the mid-to-late 1930s, when, at the height of the Great Depression, the federal government purchased submarginal farm lands and converted it to recreational use. It is appropriate, therefore, that the park features a life-sized statue of a Civilian Conservation Corps workman, honoring the efforts of the 3.5 million young men who served in the CCC from 1933-1942. To reach Singletary Lake State Park from White Lake, drive 6.6 miles southeast on NC 53. A small entrance, marked “Singletary Lake Group Camp” is on the left. Singletary Lake is open 8-5 daily year-round, except Christmas Day. Admission is free. 910-669-2928 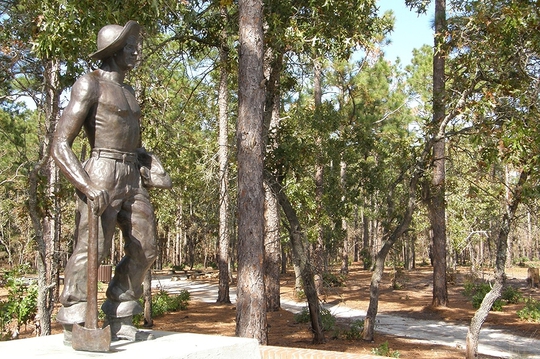 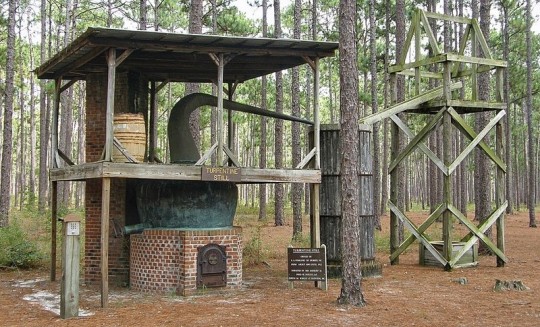 Turnbull Creek Educational State Forest, located in Bladen County northeast of Elizabethtown, is one of North Carolina’s six educational state forests. These forests are described as outdoor classrooms where visitors of all ages can learn about the complex ecosystems which comprise a forest and gain a better understanding and appreciation of forests. At Turnbull Creek, the classroom environment is clearly demonstrated at the Naval Stores Exhibit area, where benches are positioned in front of an original turpentine still that operated from 1890 to 1912. Resin was collected from pine trees by chipping the bark with a hack, allowing the gum to ooze down the surface into a collection box. The resin was then delivered to distilleries where it was condensed into turpentine. Also exhibited is a representative tar kiln. Called “tarkels,” such kilns enabled pinewood to be burned slowly, a process by which tar could be released from the wood and allowed to drain into a collection pit. Tar was used to waterproof ships rigging; pitch was used to caulk ships hulls and decks. During the days of wooden sailing ships, naval stores were as important as oil is today, and from 1720-1870, North Carolina led the world in the production of such products. 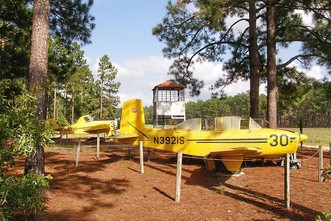 The Fire Control Exhibit show-cases some of the tools used to help spot – and stop – forest fires, including a T-34 aircraft, a versatile plane used by the NC Forest Service in numerous ways: as a patrol plane when danger of fire is high; as a scout plane, providing “eyes in the sky” to help direct ground personnel during firefighting efforts; and as a lead plane when air tankers are employed, guiding them to target areas. Also exhibited is a an air tanker, capable of carrying up to 275 gallons of fire retardant, and a tractor plow. The “backbone” of wildfire suppression, the plow is used to create a fire break or containment line. 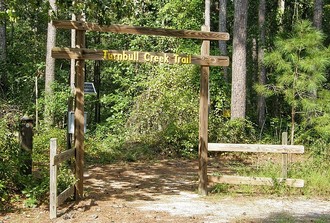 Still another means of educating the public is the Turnbull Creek Trail, an easy-to-moderate path that loops its way down a hillside to the creek, a typical “black water creek” that gets its dark “tea” color from the tannic acid formed by rotting limbs, twigs, and leaves. During the early days of logging, Turnbull Creek was used to transport small rafts of logs from the woods to the Cape Fear River and waiting sawmills. The trail takes 30-45 minutes to walk, including time to stop and listen to the brief taped messages at several points along the trail delivered by “talking” trees that tell visitors about themselves, their uses, their surroundings, and general history of the forest itself. The Turnbull Creek ranger office is open 9-5 Monday-Friday.  910-588-4161