Scroll down this page or click on specific site name to view features on the following Catawba County attractions/points of interest: 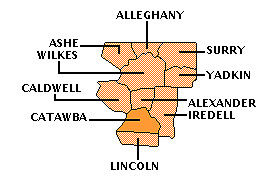 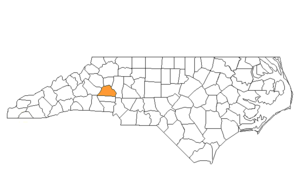 Created in 1842, the county is named for the Catawba Indian tribe.

The county seat is Newton, named for Isaac Newton Wilson, a member of the NC General Assembly who first proposed the creation of the new county.  Other communities include Brookford, Clairemont, Hickory, Longview, and Madison.

It is worth noting that the Bunker Hill Covered Bridge is one of only two such structures remaining in the state. 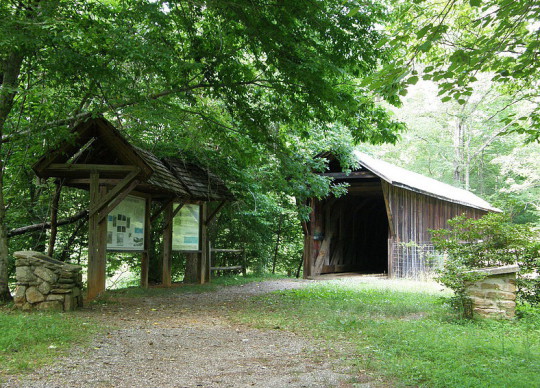 Built in 1895, the 85-foot Bunker Hill Bridge spans Lyles Creek. Originally constructed as an open span, its cover was added in 1900. This Catawba County landmark is more than just a nostalgic carryover from the past. First, it is one of only two original covered bridges remaining in North Carolina – the other is Pisgah, located in Randolph County. Second, it is the only bridge still in existence utilizing the truss design patented by Herman Haupt, Chief of Military Railroads for the Union Army during the Civil War. As such, it was designated a national historic civil engineering landmark in 2001, one of only three in the state.  The Blue Ridge Parkway's Linn Cove Viaduct and the preservation of the Cape Hatteras lighthouse are the other two. 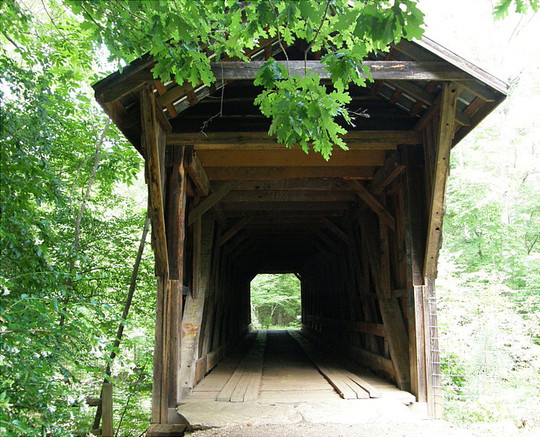 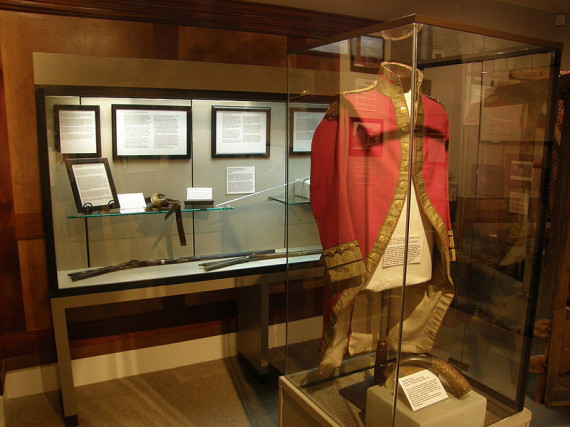 The Catawba County Museum of History occupies the former county courthouse in downtown Newton. Built in 1924, it is the ideal setting for the Museum’s extensive collec-tion. Farm implements, furniture, clothing, pottery, two centuries of military uniforms, and an extensive collection of Civil War artifacts are all attractively showcased. A visit to the Museum’s doctor’s office, circa 1923, will give you an appreciation for modern medicine, while a few minutes behind the bars of a county jail cell will make you thankful for your freedom. Other interesting artifacts include a reconstructed parlor from an 1840 plantation house, an open-wheeled racecar from the 1930’s, and the world’s largest sapphire, measuring 53,085.375 carats and listed in the Guiness Book of World Records. 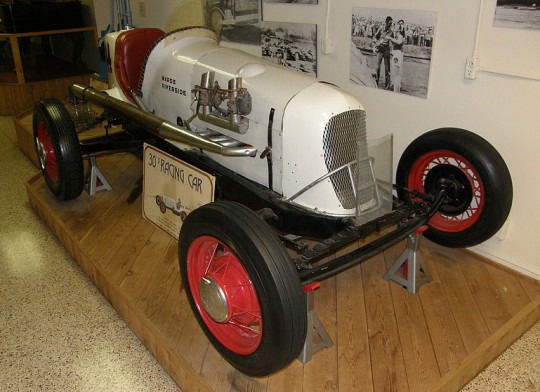 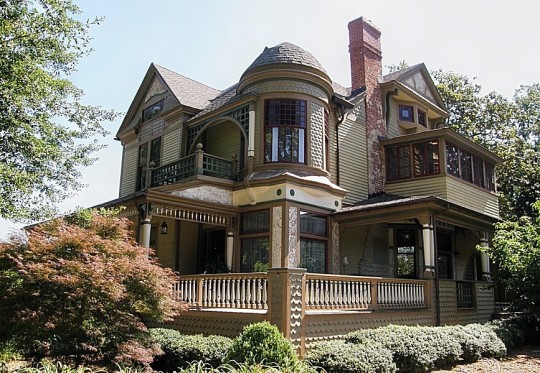 The NC Department of Archives and History considers the Harper House in Hickory to exemplify “the finest Queen Anne interior styling in the state.” Built in 1887 for banker Daniel Webster Shuler, the elegant 20-room home is embellished with intricately-carved woodwork, parquet floors, myriad wallpapers on walls and ceilings, draperies, stained glass, decorative tiles, ornate furniture, and more. In keeping with the protocols of Queen Anne design, every space is seemingly filled with something to attract the eye. Guided tours include the entry hall, three parlors, dining room, and kitchen on the first floor; master, guest, and children’s bedrooms on the second floor; and the third-floor attic, used during the Prohibition era as a speakeasy by then owner Finley Gwyn Harper, Sr. Call 828-324-7294 for hours; fee charged for guided tours, which last approximately 45 minutes. 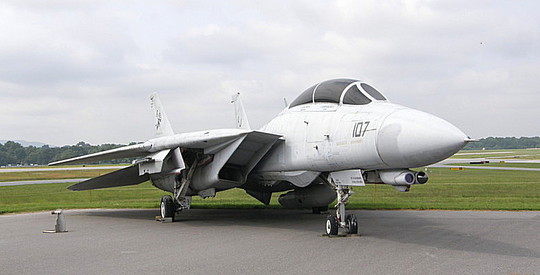 The Hickory Aviation Museum does an admirable job of achieving its three-fold mission:  preserve military and civilian aircraft and related artifacts; honor veterans; and educate visitors about aviation history.  The Museum is located in the passage terminal of the Hickory Regional Airport, with a dozen or so aircraft on display immediately outside.  Interior exhibits include numerous plane models, photos, flight uniforms, and miscellaneous relics.  One particularly noteworthy artifact is a Nordsen bombsight, one of the most carefully guarded “Top Secret” inventions of World War II.  The Preddy Memorial honors George and Bill Preddy, brothers from Greensboro who flew P-51 Mustangs during the Second World War.  George was the highest scoring ace of the war, recording 26.83 aerial victories before being killed in action by friendly fire on Christmas Day, 1944.  Bill was killed in April, 1945, shortly before victory in Europe was achieved.  General Charles M. McCorkle is the subject of another display; McCorkle, a native of Newton, participated in air action during the Allied landings at Salerno and Anzio and earned such decorations as the Silver Star, Legion of Merit, Distinguished Flying Cross, and Purple Heart.  Planes on exhibit include an F-14D Tomcat, an F-105B Thunder Chief, a Lockheed T-33A Shooting Star, and an FJ-3M Fury.  Admission is free.  Hours are 10-5 Saturday and 1-5 Sunday.  828-323-1963 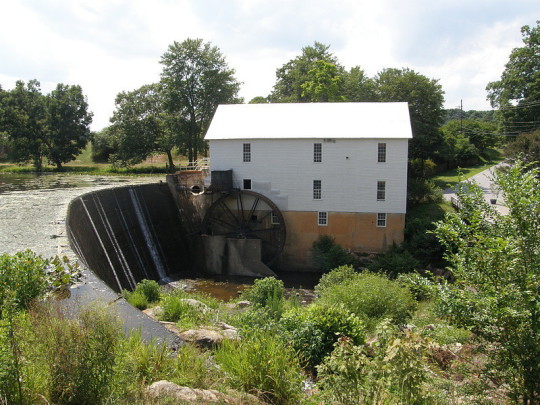 Murray’s Mill Museum Complex includes a working mill, a wheat granary, a general store, and a millwright’s home. Built in 1886 alongside Ball’s Creek, the mill continues to do the work it was designed to do more than a century ago.   Water from the creek still powers the 28-foot waterwheel that turns the gears that move the millstones. Tours of the four-story building are often conducted while the mill is in operation, giving visitors a first-hand look at grain being processed into flour.   Guides are quick to point out that the original millstones are still in use, and that each one weighs more than a ton! Snow Drift flour, a specialty of the Murray family for three generations, is still manufactured and sold at the mill, as it has been for decades past.  Just up the hill is the restored, three-story wheat granary, which today is used to showcase Catawba and Lincoln County pottery, primitive furniture, folk art, and sculpture. The fully restored home of millwright John Murray is also included as part of the tour.   Directly across from the mill is Murray-Minges Mercantile. This 1890 general store offers a variety of nostalgic products for purchase, including “penny” candy and “soda pop.” 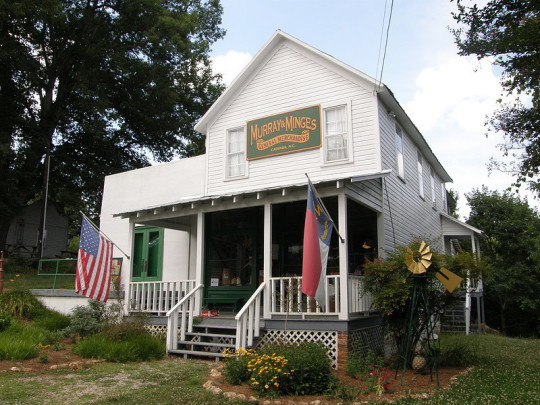