Scroll down this page or click on site name to view the feature on the following Alexander County attraction/point of interest: 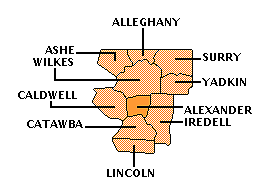 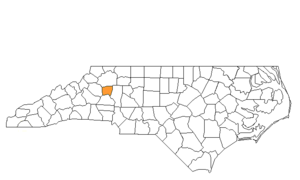 Created in 1847, Alexander County was named for William J. Alexander, a member of the legislature and Speaker of the North Carolina House of Commons.

The county seat is Taylorsville, named either for John Louis Taylor, first chief justice of the NC Supreme Court, or for US president Zachary Taylor.

It is noteworthy that Alexander County is the only place in the world where the gem hiddenite has been found. 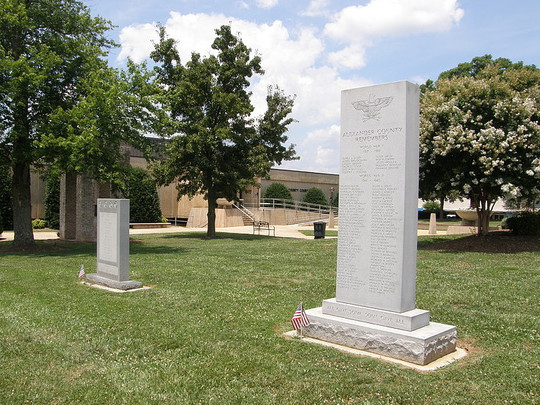 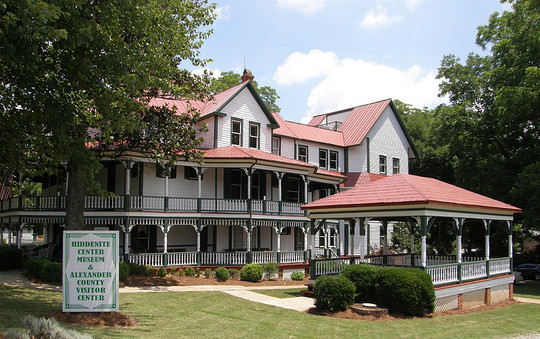 Housed in the majestic Victorian mansion once owned by “Diamond Jim” Lucas, the Hiddenite Center is a folk and cultural arts center that invites visitors to “step back in time” to experience the local history and lifestyle of a bygone day. Alexander County in the western Piedmont is recognized for its abundance of mineral and gem deposits, and the town of Hiddenite takes its name from the emerald-like gem found only in North Carolina. The gem, in turn, is named for William E. Hidden, the mineralogist who discovered the stone and prospected the region in the 1880s. The largest emerald ever found in North Carolina – 1,438 carats – was unearthed in Hiddenite, as was the famous “Carolina Emerald,” considered the largest and finest cut emerald in North America. A reasonable assumption, therefore, is that an entrepreneurial gentleman nicknamed “Diamond Jim” was drawn to the town during the first decade of the 20th century because of its gems and minerals. Such, however, was not the case.

James Paul Lucas was a successful businessman and world traveler who also enjoyed bird hunting. He often visited Hiddenite during hunting season, and was a frequent guest of the Sulphur Springs Resort Hotel. In 1910, his fondness for the area led him to purchase an existing two-story frame house that already had an interesting history. A young man built the house around the turn of the century as a wedding gift for his bride-to-be, but political differences caused the couple to cancel the wedding and go their separate ways. Sometime five years after acquiring the house, Lucas enlarged the house in an unusual way. The house was cut in half horizontally, a new second floor was built, and the original second floor was raised to become the third floor. (Nearly a century later, this architectural feat earned the Lucas Mansion a spot on the National Registry of Historic Places.) The newly enlarged house had 22 rooms and was the first area residence to include indoor plumbing and electricity. With safety in mind, the house also included a self-sufficient fire extinguisher system – three water tanks connected to standard issue fire hoses mounted to a wall on each of the three floors! The exterior was graced with elegant first and second floor porches that wrapped around the entire house.

Visitors to the house today are given a guided tour of the Mansion’s first floor, including the kitchen, dining room, foyer, sitting room, music room, downstairs bedroom, and bath.   Most of Lucas’s personal possessions were sold at auction following his death in 1952, but a few items have been re-acquired and are on display, including several walking sticks and his Masonic uniform. The majority of furnishings simply reflect the styles of the period and the social position Lucas enjoyed. The second and third floors are self-guided. The middle floor showcases rotating exhibits that are changed every month. Subjects range from history and science to arts and crafts. The third floor is devoted to the extensive doll collection owned by Eileen Lackey Sharpe. The exhibit includes over 500 dolls from around the world, dating from pre-Civil War to present, and fashioned in all manner of shapes and sizes. A Hiddenite native, Eileen Sharpe and her husband R. Y. Sharpe, founder and CEO of Pilot Freight Carriers, spearheaded efforts in 1981 to save the vacant Lucas mansion from neglect and to make it the home for the newly established Hiddenite Center. From NC 90 in Hiddenite, turn north onto Hiddenite Church Road. The Center is three blocks on the right. Hours are 10-4:30 Tuesday-Friday and 10-3 Saturday. Closed Sunday and Monday. Admission charged. 704-632-6966 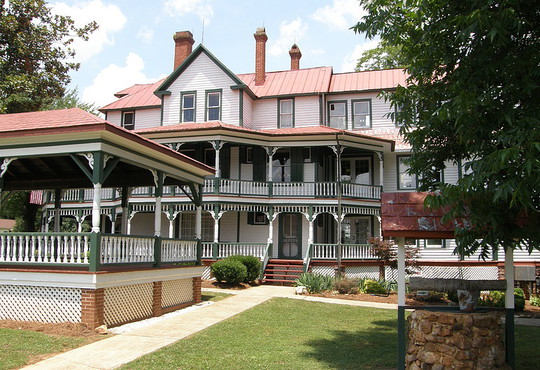 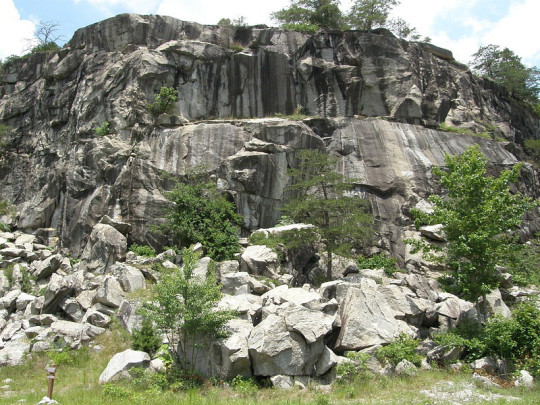 For the longest time, the gem Hiddenite, a neon-green, emerald-like stone found nowhere else but Alexander County, was the county’s undisputed natural treasure.  Since May, 2012 however, the gemstone has had a rival – Rocky Face Mountain Recreational Area.  Just as the gem hiddenite has drawn people to Alexander County, the newly-developed recreational park is attracting visitors as well.

There’s little reason to question how Rocky Face got its name.  One look at the craggy outcropping of gray stone 100 feet in height will convince visitors that the mountain does indeed have a rocky face.  The perfect face, in fact, for rock climbing and/or rappelling, which are but two of the park’s popular activities.

For roughly twenty years, starting in 1922 and continuing into the early 1940s, a rock quarry operated on this site.  For a time, a prison camp was located on the east side of the mountain.  In 2003, Rocky Face Mountain was placed on the North Carolina Registry of Natural Heritage Areas.  Subsequently, a nearly half-million dollar grant from the North Carolina Parks and Recreation Trust Fund, coupled with the donation of the land by the Carolina Land and Lakes Resource Conservation and Development District, with further assistance from the Felbourn Foundation, enabled Alexander County to create the recreational area.

The park encompasses 318 acres.  Current amenities include the park office, restrooms, picnic shelter, campsite, and a paved, 3/10-mile ADA walking track that runs along the base of the rock cliff.  Rock climbing and rappelling for qualified individuals requires a valid permit, issued daily at the park office.  Specific areas along the rock face have been assigned names that will undoubtedly intrigue climbers – examples being “Dirty Chimney,” “Black Hole,” “Quickdraw,” and “Blast in Black.”  Approximately five miles of hiking trails wind their way up the sides of the mountain or across its summit.  Buzzard Loop is an easy-to-moderate trail, roughly three-quarter mile in length, which leads to an overlook of the old rock quarry.  Not surprisingly, the mile-long Prison Camp Trail passes the former site of inmate housing before connecting with Hollow Rock Trail at the top of the mountain.  Grindstone Trail is a mile-long, moderate-to-strenuous switchback path up the south side of Rocky Face that also connects to Hollow Rock Trail at the top.  Hollow Rock itself is a 2.5 mile loop trail running southwest to northeast along the summit; rated moderate-to-strenuous, it provides numerous rock overlooks.  For safety, the trails are marked with station numbers; should emergencies arise, it’s easy to report your position when calling the park office or 911. 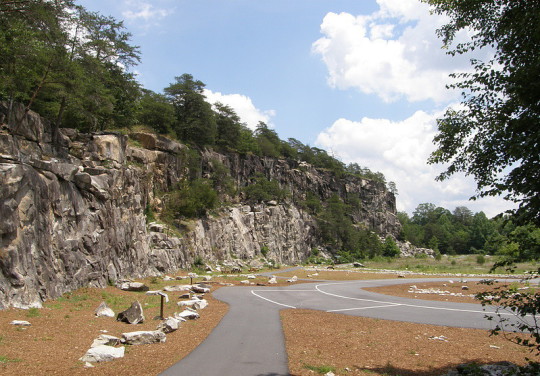