Scroll down this page or click on specific site name to view features on the following Caldwell County attractions/points of interest: 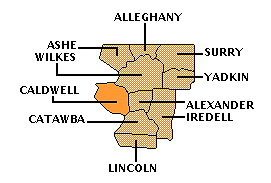 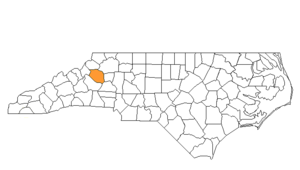 Created in 1841, the county is named for Joseph Caldwell, the first president of the University of North Carolina.

The county seat is Lenoir, named for Revolutionary War general William Lenoir.  Other communities include Hudson, Granite Falls, and Rhodhiss. 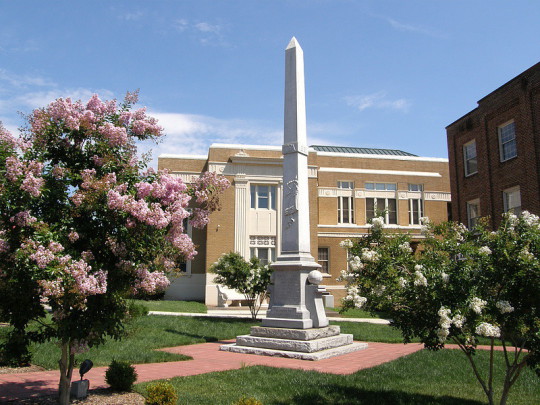 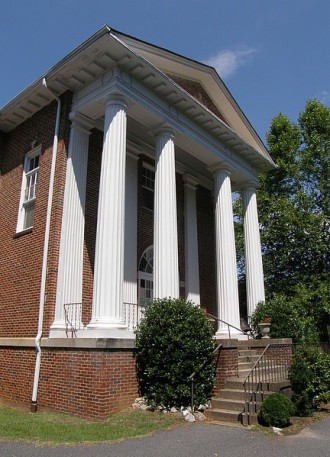 A ten year restoration project completed in 2000 gave Caldwell County the kind of historical museum local citizens first envisioned a full half century earlier. The Caldwell County Historical Society saw its 50-year vision fulfilled when restoration of the old Davenport College Music Building was completed. The 35,000-square foot brick edifice was built in 1927 and was the last surviving campus structure from the Davenport College for Young Women, established in 1858. Long unused and in disrepair, the music hall was slated to be burned down in 1985 as practice for firefighters. Firemen balked at the idea, however, and the county’s Historical Society, since 1950 in search of a building suitable for use as a museum, stepped forward. Arrangements were made to lease the building from the county school system for $1.00 a year, and soon thereafter restoration efforts were begun. The Caldwell Heritage Museum officially opened in 1991, with continued improvements being made in phases over the next ten years.

Exhibits on the Museum’s first floor are arranged in chronological order, beginning with artifacts relating to the region’s original Cherokee and Catawba inhabitants and progressing through the colonial, Revolutionary, ante-bellum, Civil War, and Reconstruction periods, and extending through the 20th century. The Indian exhibit tells an interesting story about the “Twin Poplars,” dating back to 1737.   The Catawbas peacefully accepted the steady incursion of white settlers, angering the Cherokees who wanted to drive out the newcomers. Hostilities erupted between the two tribes. After several days of bloody fighting and the loss of many warriors on both sides, the two tribes resolved their differences. To symbolize the peace, two young poplar saplings were tied together. Located a few miles outside Lenoir, those twin poplars still stand, two trees grown together into one at the crown, a silent testament to a peace forged more than 250 years ago. By contrast, the Museum’s Civil War exhibit documents a sadder moment in history. At the battle of Gettysburg, a company of Caldwell County soldiers suffered a 100% casualty rate during a single engagement. Of the unit’s 91 men, 31 were killed and 60 were seriously wounded. Among the 20th century items on display is a rarely seen 46-star flag, used for a relatively brief period from 1908 to 1912.

Special collections occupy the building’s second floor, including the Military Room, showcasing uniforms, weapons, photographs and artifacts from World War I through the war in Iraq. The Potpourri Room displays miscellaneous items reflecting daily life.   Visitors of a certain age will remember these ordinary household items from their youth with a sobering realization that they are now legitimate “antiques” – iceboxes and wringer washers, rotary dial telephones and 13-channel black-and-white television sets, milk bottles and cheese boxes. Since the building originally served as a music hall, it is appropriate that one of the rooms is devoted to a collection of band equipment and uniforms from different Caldwell County schools. A Listening and Reading Room is also located on the second floor. The Museum is ideally situated on a hill in the heart of Lenoir. Hours are 10-4:30 Tuesday-Friday and 10-3 Saturday. Admission is free; donations accepted. 828-758-4004 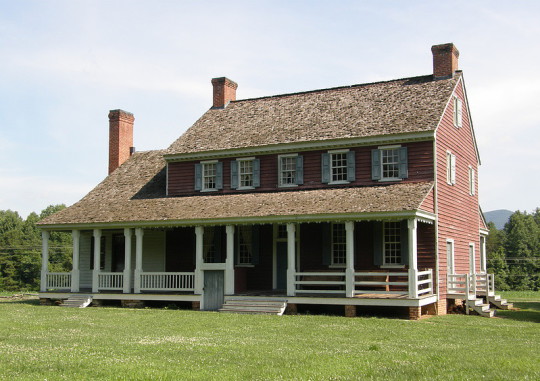 Fort Defiance, just a few miles off US highway 321 connecting Lenoir and Blowing Rock, is a true North Carolina treasure. Don’t be misled by the name, however. There is no “fort” in the traditional sense to be found. Instead, you will see the impressive 1792 home of Major General William Lenoir, who built his Federal-style house near the place of a former stronghold built during early days of the Revolutionary War. By the time Lenoir built his home, the location was so widely known as Fort Defiance that the name naturally lent itself to the house. Home to six generations of the Lenoir family, Fort Defiance benefits greatly from the vast number of original family possessions on display. While many historic sites proudly showcase furnishings original to their appropriate periods, the Lenoir house boasts over 300 original furnishings and artifacts which actually belonged to the Major General or his immediate descendants. One example is the rustic farm table which stands at the center of the winter kitchen. Likely the oldest piece of furniture in the house, the table dates to about 1760. Another example is the Queen Anne secretary found in Lenoir’s study and which he used during his years in the state legislature. Knee britches and an outer coat worn by the Major General are displayed in the second floor bedchamber. 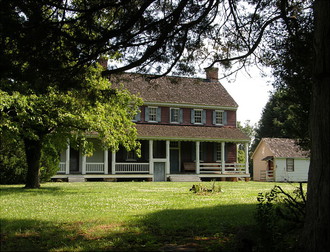 Even though he had received virtually no formal education, Lenoir’s first job was none-theless that of a school teacher, first in his native Virginia, then later in Halifax County, NC. Soon after marrying Ann Ballard, Lenoir trained to become a surveyor, the occupation which ultimately drew him from eastern North Carolina to the rugged backcountry. After settling a few miles east of present-day Wilkesboro, Lenoir soon joined the militia. By the outbreak of the Revolutionary War, he was a captain. Gaining fame at the battle of Kings Mountain, Lenoir eventually rose to the rank of Major General. A public servant of the first order, Lenoir served in both houses of the state legislature, as speaker of the senate, and as first president of the Board of Trustees for UNC. Appropriately, when Caldwell County (where Fort Defiance is located) was established in 1841, the county seat was named in Lenoir’s honor. A county in eastern North Carolina bears his name as well. 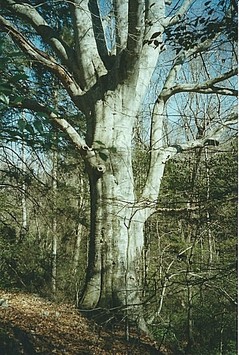 Built between 1788 and 1792, the house was appreciably larger than the one occupied by the Lenoir family during its construction – a log cabin located nearby at Buffalo Creek. Among the furnishings displayed are two matching mirrors that came all the way from Glasgow, Ireland. They receive special attention from tour guides for two reasons. First, it took three years for the mirrors to make their way from Ireland to Lenoir’s backcountry home – 1 ½ years to reach North Carolina, and still another year-and-a-half for Lenoir to finally get them delivered from the coast. Second, the mirrors cost 9 sterling; incredibly, the house they were placed in only cost Lenoir 8 in cash money to build. The cost of construction was actually a great deal more, but Lenoir arranged to have a majority of the work done by bartering. Visitors to the homesite who are into horticulture as well as history will be interested in seeing the champion beech tree on the property. This towering treasure is state certified as the largest such tree in North Carolina. The site also features a 200-year old Chinese chestnut tree and a bald cypress, a rare specimen in the western piedmont. From US 321 north of Lenoir, turn right onto NC 268. Fort Defiance is 4.5 miles on the right. Hours of operation are 10-5 Thursday-Saturday and 1-5 Sunday from April-October. Open weekends only (or by appointment) November-March. Admission charged. 828-758-1671 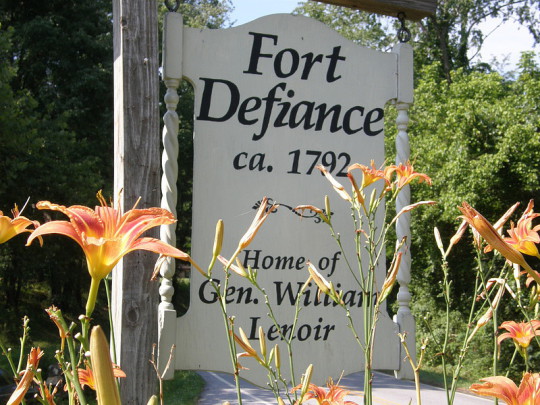 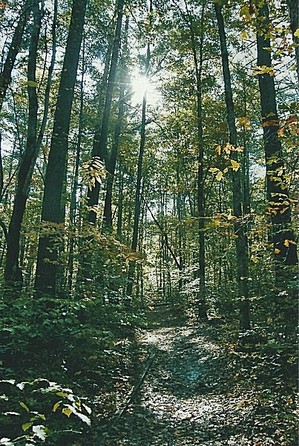 Tuttle Educational State Forest, roughly midway between Lenoir and Morganton, covers 290 acres in the foothills of the Blue Ridge Mountains. Highlights of this state-managed forest include excellent picnic facilities; a “Talking Tree” Trail; ten other walking trails; and a small Discovery Center. The site also has ranger-conducted programs available for groups visiting the forest. The North Carolina system of educational state forests presently includes six centers statewide, including Tuttle. It is named in honor of Lelia Judson Tuttle, youngest of nine children born to B. M. and Mary G. Tuttle, in May, 1878, in a home which still stands adjacent to the state forest. Desiring to set aside a portion of her family estate to serve the people of North Carolina, Tuttle deeded 160 acres to the Tuttle Forest Foundation in 1956. The Foundation leased the property to the NC Forest Service in 1973; it opened to the public in 1977. In 1997, an additional 127 acres were purchased from the Tuttle family, bringing the total acreage to 287. 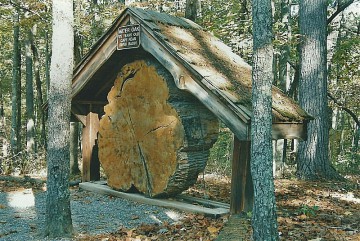 North Carolina’s state-managed forests can best be described as outdoor classrooms, teaching visi-tors about the complex ecosystems that comprise a forest and helping them gain a better understanding and appreciation of forests. One such means of ed-ucating the public, and a standard feature at each state forest, are the “Talking Tree” Trails.  At Tuttle, this trail is an easy-to-moderate path .6 miles in length that loops its way over rolling hillsides covered with a diverse mixture of hardwoods and pines. The trail takes about 45 minutes to walk, including time to stop and listen to the brief taped messages at several points along the way. Carolina hemlock, white and scarlet oaks, and long and short leaf pines are among those trees which have been given speaking parts. The trees have names, speak in the “first person,” and tell visitors about themselves, their uses, their surroundings, and general history of the forest itself. Each tree has several different messages, so by pressing the play button more than once, visitors receive additional information. 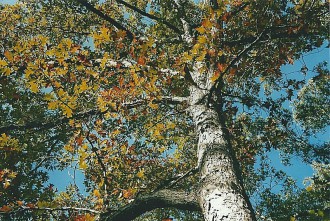 The Long Demonstration Trail, rated moderate-to-strenuous, is the longest hike, covering 2.7 miles and taking about 1-¼ hours to walk. The trail offers scenic views while also intro-ducing visitors to forestry practices.  Sleepy Hollow, Gaz-ebo, and Fireline are intriguingly-named trails that traverse more remote sections of the woods. The site is equipped with modern restroom facilities, thirteen individual picnic areas with tables and grills, and a spacious group shelter with a large brick fireplace (advance reservations required). From Lenoir, take US 64/NC 18 West to Playmore Beach Road, then turn right. Holmes Educational State Forest is open Tuesday-Sunday from mid-March until mid-November. Call the office for daily hours and for information about ranger-conducted classes for groups of ten or more. 828-757-5608