Scroll down this page or click on specific site name to view features on the following Richmond County attractions/points of interest: 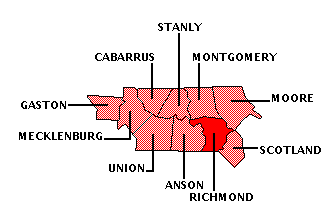 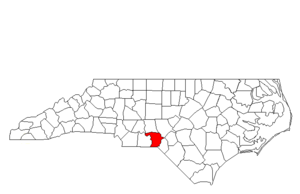 Created in 1779, the county is named for Charles Lennox, the third Duke of Richmond and a firm supporter of the American colonies.

The county seat is Rockingham, named for Charles Watson Wentworth, the second Marquis of Rockingham.  Other communities include Ellerbe, Hamlet, and Hoffman. 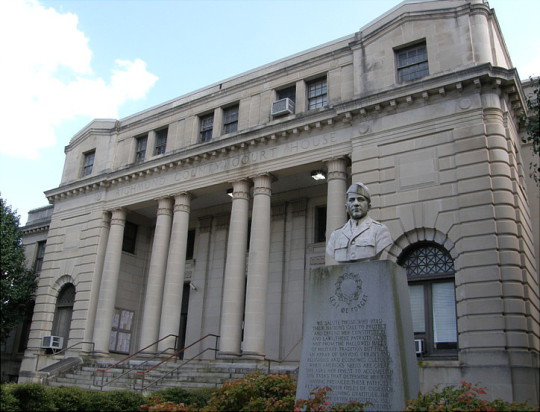 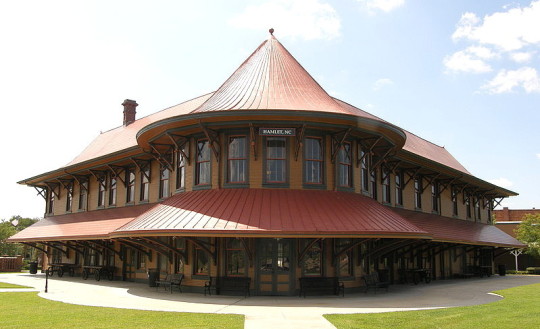 Built in 1900, the Hamlet Depot is an architectural gem, the only Victorian/Queen Anne-style passenger station in North Carolina and recently returned to its turn-of-the-20th-century splendor.  Although it remains an active passenger station, the Depot also serves as a museum devoted to sharing the history of Hamlet in particular and railroading in general by means of artifacts, oral histories, music, and interactive displays. 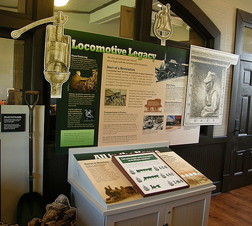 Visitors can tap out a message in Morse code using a vintage telegraph key, make train connections using the 1896 map of the Seaboard Air Line Railroad routes and principal connections, and listen to – and perhaps sing along with – such well-known railroading songs as “John Henry” and “Rock Island Line.”  On the Depot’s second floor, a large, custom-made, and highly-detailed model railroad layout depicts the town of Hamlet circa 1952.  Across the street from the Depot is the Tornado Building, so called because it houses the restored replica of the Tornado steam engine.  The original Tornado, built in 1839, was the first locomotive to arrive in Raleigh,  on March 21, 1840,  on the newly-completed  Raleigh & Gaston Railroad.   Running 85 miles, the 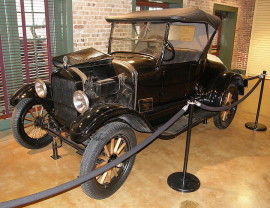 Raleigh & Gaston line was an important link between the Virginia and North Carolina capitols of Richmond and Raleigh, and later became a part of the Seaboard Air Line Railroad.  The Tornado replica, on loan from the National Railroad Museum and Hall of Fame, is displayed on wooden rails topped with iron strips, the precursor to steel rails.  The wood and metal replica is an antique in its own right, having been specially made for the Raleigh Centennial Exposition parade in 1892.  The renovated building it which it is displayed had to have a portion of its roof raised to make space for the locomotive’s tall smokestack.  Also exhibited in the Tornado Building is a 1924 Model T Ford, a 1930 Ford touring car, and yet another model railroad display.  Hours for Hamlet Depot & Museums are 9-5 Monday through Friday and 1-5 Saturday and Sunday.  Admission is free.  910-582-2651 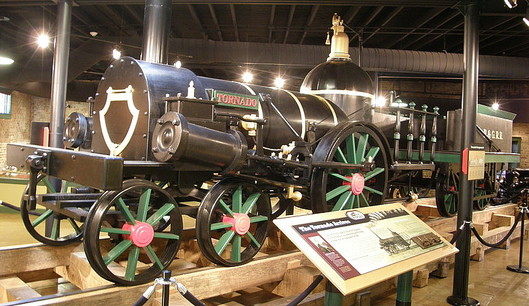 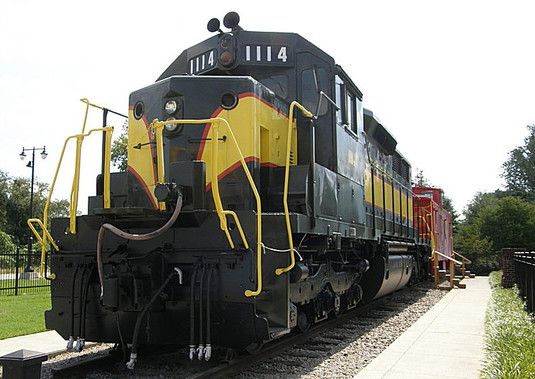 The National Railroad Museum and Hall of Fame [NRM], located at 120 East Spring Street, is just a few blocks away from the historic Hamlet Depot.  Founded in 1976, the NRM was Hamlet’s first train museum.  Operated entirely by volunteers, the facility showcases all manner of railroading miscellany, with items displayed having been donated by individual collectors.  The NRM actually owns the Tornado replica, which is on loan to the Hamlet Depot & Museums for display.  NRM also owns and maintains the locomotive and caboose on outdoor exhibit in a small park adjacent to the Tornado Building.  A rare item on display in the National Railroad Museum itself is a yellow-painted velocipede, a three-wheeled conveyance used by railroad employees to inspect tracks.  The National Railroad Museum is open 1-4 Saturday and Sunday.  Admission is free. 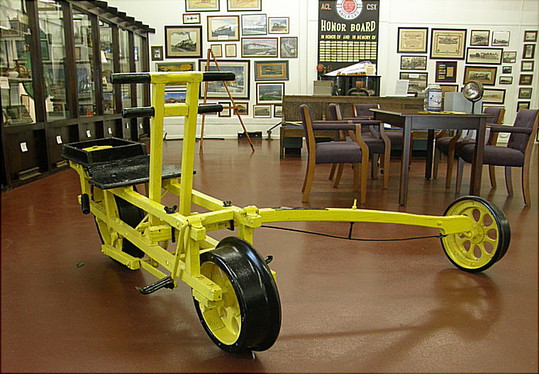 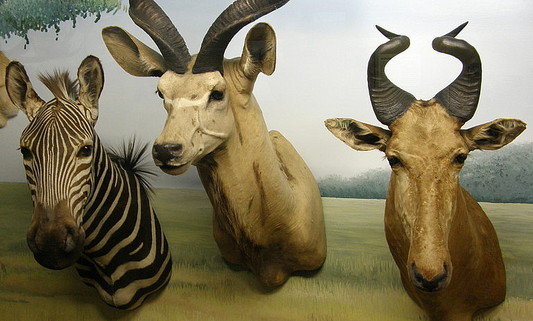 The Rankin Museum of American Heritage in Ellerbe showcases an eclectic mix of artifacts sure to surprise visitors. From a rare breed of salamander that has no gills and no legs and is found only within a confined area of North Carolina, to a harpoon carried by Commander Robert E. Perry on his 1909 expedition to the North Pole, to the teeth and skull of a saber-toothed tiger, the museum’s two galleries are crammed with items of interest. Our State magazine rated the facility as one of the ten best museums in North Carolina.

The Museum is largely the outgrowth of the personal collection of area resident Dr. Pressley R. Rankin. Although it opened in 1985, in some respects the museum really had its beginnings back in the late 1920s, when Dr. Rankin first started collecting curiosities at the tender age of nine. Most of the animals and mounted heads on display are trophies from worldwide hunting trips he and his son took in the 1970s. Among the animals exhibited are a jaguar and an ocelot from the wilds of Central America and a polar bear from the Bering Sea. The African exhibit spotlights more than a dozen exotic animals, including a spotted leopard from Mozambique. Still another display features a variety of North American animals, from the large caribou, moose, and elk, to the smaller fox, raccoon, bobcat, and beaver.

In addition to these commonly-seen animals, the Museum contains fascinating remains from creatures that are now extinct. One showcase, for example, contains an auk egg and a dodo egg.   Although each is large, both are small in comparison to the egg of an elephant bird, which measures more than a foot in length. Speaking of eggs, actual dinosaur eggs from the Henan Province in China are on exhibit. These date back to the Mesozoic era, 250 to 65 million years ago. Showcase after showcase features fossils spanning 500 million years.

Along with the natural history and paleontology exhibits are 18th and 19th century items of regional origin. Spinning wheels, farm tools, and an operable loom are on display. A printing press is also exhibited, and eagle-eyed visitors will spot a copy of the November 11, 1918 edition of the Rockingham Post-Dispatch newspaper announcing in bold type, “The Big War Over, Germany Signs Armistice.” Visitors will also see a 500-gallon turpentine still that is thought to be the best preserved of its kind in the southeast. The still was moved from nearby Hoffman and is a striking reminder that North Carolina was the chief supplier of naval stores from 1740 to 1870. Richmond County was on the western edge of a vast longleaf pine forest, and the production of tar, pitch, and turpentine was an economic lynchpin of the region.

The Museum also showcases artifacts from Indian tribes ranging from the Amazon to Alaska. The majority of relics are from tribes that lived in the coastal plains, but items from the western plains and the American southwest are also displayed. More than 1,000 arrowheads are showcased, along with tools used for fishing, hunting, and farming. The centerpiece of this gallery is a 660-to-700 year old dugout canoe found in Lake Okeechobee. An extensive collection of Eskimo art contains intricately carved ivory tusks used to make everything from cribbage boards to smoking pipes. There is also a large collection of relics from Amazonian Indians tribes. In Ellerbe, take Church Street one block north of the town’s only traffic light. The Museum is on the corner of Church and Second Street. Hours are 10-4 Monday, Tuesday, Thursday, and Friday; 1-5 Saturday; and 2-5 Sunday. Admission charged. Tours are self-guided. 910-652-6378 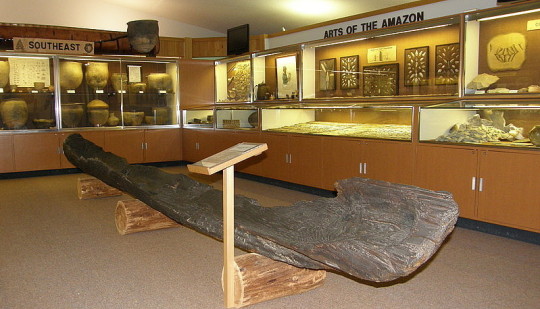