Scroll down this page or click on specific site name to view features on the following Chatham County attractions/points of interest: 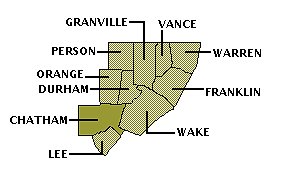 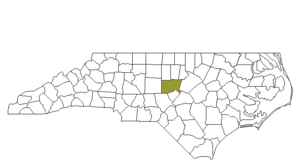 Created in 1771, the county is named for William Pitt, first Earl of Chatham, who defended American rights in the British Parliament.

It is worth noting that the Devil’s Tramping Ground, a puzzling 40-foot circle where no vegetation will grow, is located near Siler City in Chatham County.

Fire damage to the Chatham County Courthouse in April, 2010 caused the historical museum to relocate to an interim facility.  The Museum is temporarily located at 184 East Street.  Currently displayed is an exhibit on the formation of Chatham County, a photo exhibit entitled “Faces and Places in Chatham County,” and a collection of photographs and news articles about the county courthouse.  A brief slide show traces the history of the museum itself.  Hours are 12-3 on Wednesdays and 1-4 on the first Sunday of the month. 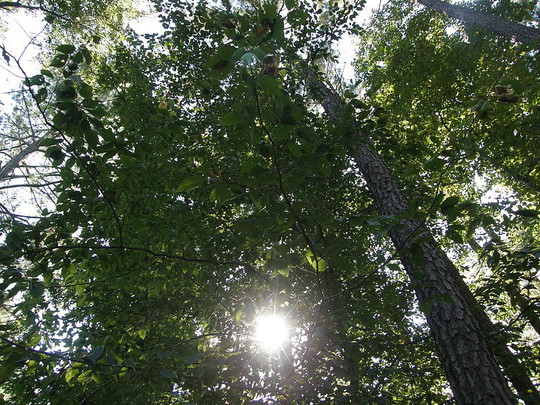 The Jordan Lake Educational State Forest is situated along the western edge of the reservoir. The site includes a picnic area and two walking trails. The 1.5 mile Forest Demonstration Trail gives sharp-eyed visitors an opportunity to spot a variety of birds, animals, and many types of hardwoods and pines indigenous to the piedmont. The .75 mile Talking Tree Trail offers just that – “talking trees” that, thanks to recorded messages, provide information about themselves, their location, and the forest history. To visit the Educational State Forest from Pittsboro, turn left off US 64 East onto Big Woods Road. The entrance is approximately two miles on the right. This site is open year-round except Thanksgiving and Christmas. For hours of operation, call 919-542-1154. 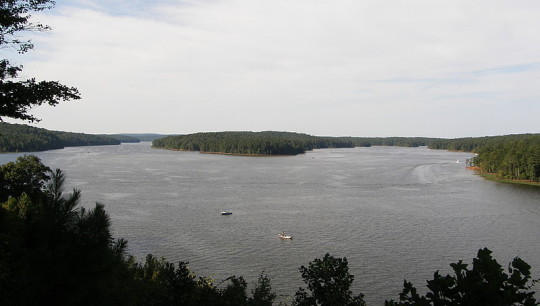 Jordan Lake State Recreation Area, near the geographic center of North Carolina, encompasses nearly 47,000 acres, 13,900 of which are permanently flooded. Jordan Dam and Lake are managed by the Wilmington District of the U. S. Army Corps of Engineers, as are the W. Kerr Scott Dam and Reservoir, west of Wilkesboro; Falls Lake, to the north of Raleigh and Durham; John H. Kerr Dam and Reservoir, straddling the Virginia/North Carolina border north of Henderson; and Philpott Lake, north of Martinsville, VA. All of these sites offer similar outdoor activities. Named in honor of U. S. Senator B. Everett Jordan, the dam was built primarily to prevent destructive flooding along the Cape Fear River Basin. Project approval from the U. S. Congress came as early as 1963, but actual construction did not begin until 1967. Impoundment of the reservoir initiated in September, 1981, and Jordan Lake reached its normal pool stage for the first time in February, 1982. Detailed maps of Jordan Lake showing local roads and all public access areas are available at the Resource Management Center. Restrooms and an observation platform overlooking the lake and dam are also located at the Center. A small playground and picnic area are close by the fishing pier just below the dam, an area referred to as the Tailrace. Common catches at the lake include largemouth bass, crappies, stripers, catfish, and white perch. Four short walking trails begin at the Tailrace Area and are intended for use by hikers, fishermen, and wildlife enthusiasts. The Jordan Dam loop trail is a .5 mile trek along a paved road crossing the top of the dam.  Altogether, the five trails cover two miles.

A large segment of the state population lives within a 75-mile radius of the project, so the lake is a popular destination for those seeking outdoor recreational activities in an increasingly-urban area. Boating is one such activity, of course, and there are no less than twelve public boat launching areas conveniently located around the lake’s southern perimeter. Boat rentals are available at Crosswinds Marina. There are six swimming beaches, six picnic areas, and five tent and trailer camping areas. Several Jordan Lake access points are located off US 64 south of Pittsboro. To get to the dam itself, and to the Management Center and Tailrace Area, follow 64 Business into the town of Pittsboro and turn onto US 15/501 South. Turn left onto Moncure-Pittsboro Road (State Road 1012) and continue to Jordan Dam Road. Turn left and continue to the parking area. The Resource Management Center at Jordan Dam is open 8-4:30 M-F. The N. C. Divisions of Parks and Recreation, Wildlife Resources, and Forest Resources work in cooperation with the U. S. Army Corps of Engineers to develop, maintain, and enhance recreational facilities, and fees are charged to access most of Jordan Lake’s recreational areas. 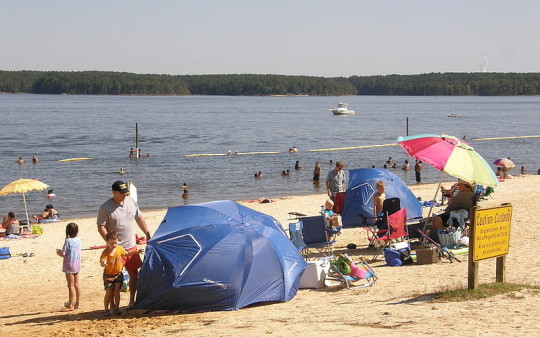