Privately owned and operated ferries were an integral part of North Carolina’s transportation system long before a state-operated ferry first plied coastal waters.  North Carolina’s current system had its origins, in a limited way, in 1934, when the NC Highway Commission began subsidizing the private tug and barge service across Oregon Inlet operated by J. B. Tillett; in 1942, the state fully reimbursed operating costs, eliminating the collection of tolls.  In 1947, the Commission purchased the ferry operation of T. A. Baum, who ran a route between Manns Harbor on the Dare County mainland and Roanoke Island; this became the NC Ferry System’s first official route.  Ten years later, the state began its second route, running ferries between Hatteras and Ocracoke Islands.

Ferry operation to Ocracoke expanded in 1959 when a private company began service between the Outer Banks village and the town of Atlantic in eastern Carteret County.  This run was abruptly halted the following year because of damage done by Hurricane Donna.  The state purchased the operation in May, 1961 and soon thereafter resumed service to Ocracoke.  This became the first toll ferry in the state system.  In 1964, the southern docks were moved from Atlantic to Cedar Island, cutting the crossing time by 75 minutes. 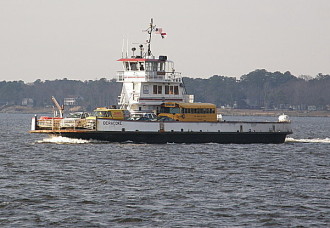 The next route to be added crossed Currituck Sound be-tween Currituck and Knotts Island.  Previously, residents of this northeastern island had to drive through Virginia to reach their county seat, and school children had to endure excessively-long bus rides.  The Southport-Fort Fisher route was established in 1965 and intro-duced the first double-ended ferry; the following year, the Bayview-Aurora route crossing the Pamlico River was added.  Beginning in 1973, service across the Neuse River was added, connecting Minnesott Beach in Pamlico County with Cherry Point in Craven County.  The Swan Quarter-Ocracoke route was the last to be added, finally providing the residents of Ocracoke with a direct link to their county seat.

In addition to these well-publicized routes, there are three small ferries funded by the NC Ferry System that are known mostly only to residents of the immediate area which they serve.  The San Succi Ferry crosses the Cashie River a few miles southeast of Windsor in Bertie County [Woodard Road, State Road 1500, between US 17 south of Windsor and NC 308 east of Windsor]; Parker’s Ferry crosses the Merherrin River northwest of Winton in Hertford County [Parker's Ferry Road between US 158 west of Winton and US 258 south of Como]; and Ewell’s Ferry crosses the Cape Fear River in western Bladen County.

The NC Ferry System's transports fall into three classes.  The River Class ferries are the smallest, ranging between 129-180 feet in length and carrying between 20-34 vehicles.  The larg- 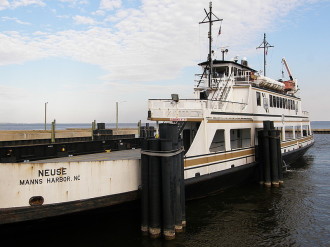 Listed below are the seven major ferry routes and the usual travel time between points.  Go directly to the NC Ferry System website for a detailed listing of departure times and to make reservations.  Fares are charged for the Cedar Island-Ocracoke, Swan Quarter-Ocracoke, and Southport-Fort Fisher ferries.  All others are free.  During summer months, advance reservations are highly recommended for the Cedar Island-Ocracoke and Swan Quarter-Ocracoke ferries.  All vehicles should be at the ferry dock at least 20 minutes prior to departure time. 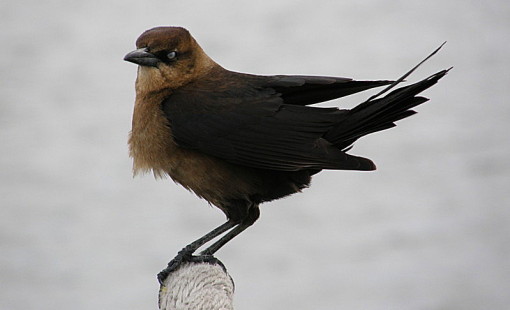