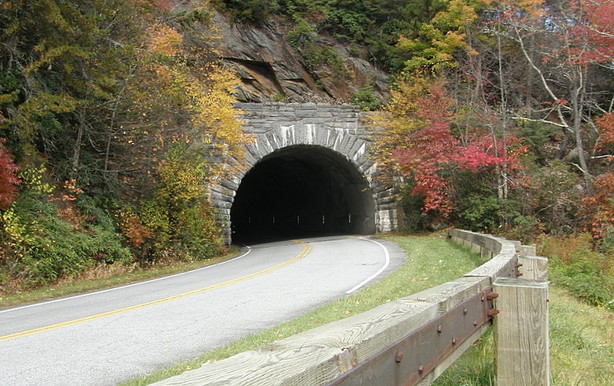 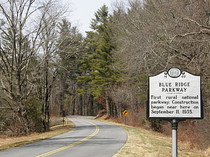 The Blue Ridge Parkway was one of many public work programs initiated during the Great Depression.  Federal agencies, the Civilian Conservation Corps, the Virginia and North Carolina highway departments, and private contractors all played their parts in the Parkway’s construction.  Work on the road began in 1935 at Cumberland Knob just south of the North Carolina-Virginia state line (Milepost 216.9).  By the start of World War II, about half of the Parkway was completed; almost all of the remaining work was finished during the 1950s and 1960s.  The one exception was the Linn Cove Viaduct on Grandfather Mountain, which was not completed until 1987.  The end result, however, was worth the wait, and the viaduct has been designated a national historic civil engineering landmark. 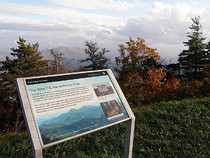 The Parkway draws two million visitors annually, more than any other unit of America’s National Park System.  While there are many worthwhile sites to visit along the Old Dominion’s stretch of highway, the Parkway’s 252-mile trek through the Tar Heel State offers more to see and do than even the most ambitious weekend traveler could accomplish.  The North Carolina segment of the Blue Ridge Parkway runs through Alleghany, Ashe, Wilkes, Watauga, Caldwell, Avery, Mitchell, McDowell, Yancey, Buncombe, Henderson, Haywood, Jackson, and Swain counties.

The Parkway is intended for pleasure, not speed.  The average speed limit is 45, but drops to 35 mph in some places.  Allowing for terrain, traffic, and sightseeing, drivers should expect to cover about 30 miles per hour.  There are seven visitor centers spaced out along the entire parkway, dozens of overlooks, and 72 trails.  Some trails, less than ¼-mile in length, are described as “leg-stretchers” while only 11 trails are considered “strenuous.”  The Parkway is open year-round, although inclement weather may require temporary closings.

Listed below are some of the Parkway’s major points of interest in North Carolina. 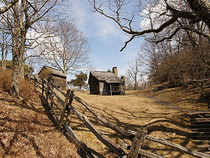 Built by Martin Brinegar circa 1880, this original cabin is one of the most photographed spots on the Parkway.  During the summer season, interpreters are often on hand to demonstrate mountain skills and provide insight into farm life in the North Carolina high country in the 1800s. 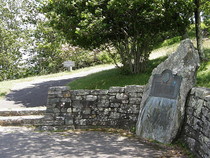 One of the Parkway’s most ardent supporters was Congressman Robert L. Doughton, and this 7,000-acre park was named in his honor.  This site includes more than thirty miles of hiking trails; the one most recommended for families is the Fodder Stack Trail, a moderate 2-mile trek through a mixed pine and hardwood forest.  Longer and more strenuous hikes include Cedar Ridge, Basin Creek, Flat Rock Ridge, and Bluff Ridge Primitive Trails.  At MP 241.1 is the parking area for the Wildcat Rocks Overlook, offering one of the Parkway’s most spectacular views. 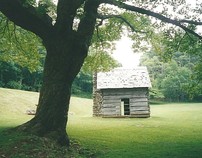 This park features restrooms, picnic area, and two nature trails.  The 600-acre park is named in honor of E. B. Jeffress, who, while serving as chairman of the NC State Highway Commission, played a key role in the routing of the Parkway through the northwestern counties of North Carolina.

The BRP crosses over US 221/321 at this point.  Boone is seven miles to the north; Blowing Rock is two miles to the south. 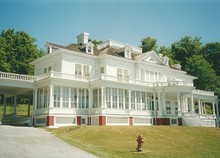 This 3,600-acre site is one of the most popular stops along the Parkway.  The focal point is the beautifully-maintained, 20-room Flat Top Manor, the former home of industrialist Moses Cone, whose textile mills produced such a high-quality denim fabric that he earned the title “Denim King.”  The Manor now houses the Parkway Craft Center.  The Park has 25 miles of horse and carriage trails; the Flat Top Mountain hiking trail passes the Cone family cemetery on its way to an observation tower.

The former retreat of insurance executive Julian Price, this 4,300-plus-acre park offers fishing, camping, and picnicking, along with four hiking trails.  The 2.7-mile Price Lake Trail is an easy walk encircling the 47-acre lake.  Price Park is the terminal point for the 13.5-mile Tanawha Trail, which parallels the Blue Ridge Parkway as it weaves southwest to Beacon Heights at Milepost 305.5. 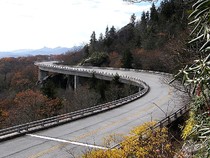 The last segment of the Blue Ridge Parkway to be completed skirts the southern edge of Grandfather Mountain.  A visitor information center is located at the southern end of the viaduct; a trail leading from the parking area provides views of the celebrated, elevated roadway from several different vantage points.

The BRP crosses over US 221 at this point.  One mile north is the entrance to Grandfather Mountain and the famous “Mile High Swinging Bridge.”

The 13.5-mile Tanawha Trail begins at the Beacon Heights Parking Area and parallels the Parkway as it winds northeast, ending at Julian Price Memorial Park. 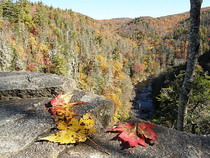 The BRP crosses over US 221 at this point.  Linville Caverns, the only show cave in North Carolina, is four miles south of the Parkway. 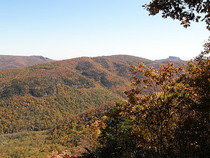 The Parkway is known for its stunning overlooks, and Chestoa View is one of the most memorable, offering a wonderful view of Table Rock slightly to the south; off to the north, the high-rise condominium that prompted passage of North Carolina's “Ridge Law” makes Beech Mountain easy to discern.

The BRP crosses over NC 226 at this point.  Spruce Pine is six miles north; Marion is 14 miles south.

Western North Carolina is known for its gem mining, and exhibits featured at this center display minerals found in the region. 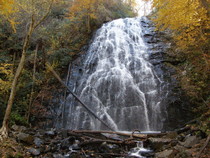 A moderate-to-strenuous trail leads to the beautiful Crabtree Falls.  The 2.5-mile round-trip walk covers steep, rocky terrain through a mixed hickory-oak forest.  Crabtree Falls is a picturesque, 60-foot cascade. Located at the parking area are a coffee shop (open seasonally), restrooms, and campgrounds. 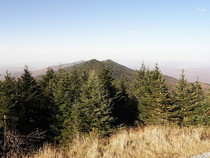 Several trails lead round-about a rocky landscape punctuated with rhododendron and mountain laurel in season.  The Craggy Pinnacle Trail rewards a moderate 20-minute effort with a 360-degree view from the summit. The ambitious Mountains-to-Sea Trail skirts the south side of Craggy Pinnacle.  The challenging Douglas Falls Trail, an 8-mile round trip, leads to the 70-foot Douglas Creek Falls.  Craggy Gardens also features a small visitor center with displays, restrooms, and picnic area.

Two words of advice:  bring money.  Home to the Southern Highland Handicraft Guild, the Center offers for sale an incredibly diverse assortment of traditional and contemporary crafts from the Appalachian region; it’s hard to resist the urge to bring home at least one souvenir from the mountains.  Maybe two or three. 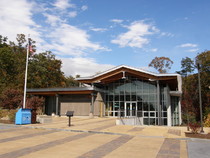 This 12,000-square-foot Center opened in the fall of 2007.  The facility highlights Blue Ridge communities, festivals, and heritage areas and features exhibits touching on the natural and cultural history of the region.

The BRP crosses over US 74A at this point.  Asheville is three miles west; Chimney Rock and Lake Lure are a little more than twenty miles southeast. 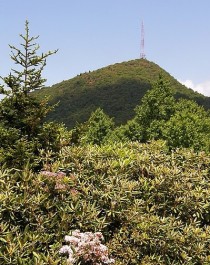 Once part of the 100,000-acre Biltmore Estate, Mount Pisgah features a strenuous, 1.6 trail that ascends 712 feet from the parking area to the summit.  The 2.1-mile Frying Pan Trail begins at the entrance to the Mount Pisgah Campground and ends at the US Forest Service fire tower, 5,450 feet above sea level.  Open seasonally, the modern Pisgah Inn offers comfortable overnight accommodations; all rooms have a private deck with a panoramic view.  A restaurant, gift shop, and gas station/convenience store are also located here. 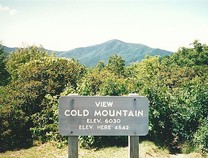 The mountain has always been here, of course, but it has become more appreciated in recent years thanks to the popular Civil War novel Cold Mountain by Charles Frazier.  Views from the Parkway are as close as most people get to this "new" North Carolina landmark.

The BRP crosses over US 276 at this point.  Waynesville is to the north; the Cradle of Forestry in America is four miles south, and Brevard is fourteen miles beyond that.

This pull-off offers another of the more memorable views along the Parkway, that of Looking Glass Rock. 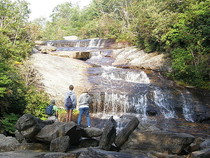 According to the legend, one of the early settlers to the region thought the rocks here looked like gravestones in a cemetery, hence the name.  A single trail leads to Upper Falls in one direction and Lower Falls in the other.

Spectacular views of Pisgah National Forest await those who make the relatively short walk from the parking area to the top of this exposed rock.

At 6,047 above sea level, this is the highest point on the Blue Ridge Parkway.  A trail leads through what is left of a spruce-fir forest.

This stop features a visitor center with exhibits, restrooms, and a panoramic view of the Great Smoky Mountains.

This is the southern terminus of the Blue Ridge Parkway, intersecting with US 441 in the Great Smoky Mountains National Park and the Cherokee Reservation.  Both the park and the town of Cherokee have numerous attractions of their own to offer.